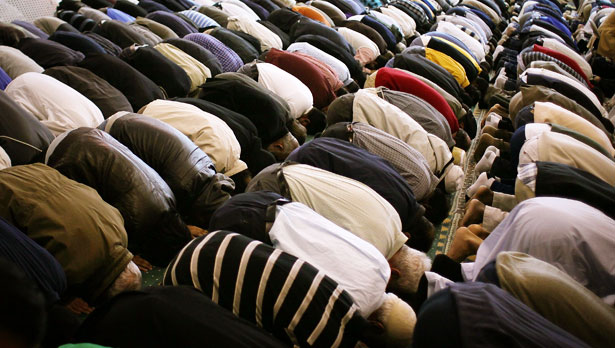 No Americans were killed on U.S. soil by Islamic extremists in 2011. Why does Islamophobia persist?

Having grown accustomed to the Muslim character of America's global enemies, Islamophobes instinctively view the ascendancy of Muslim nations with trepidation.

A portion of the purchase price will be retained by In These Times.

Seconds after lambasting the “intolerance of the Left” and comparing Barack Obama to a Soviet atheist, presidential hopeful Rick Santorum lionized his supporters at a campaign rally in Texas as the real dissenters of American politics: “[D]issent comes from folks who use reason, common sense and divine revelation,” he told an enthusiastic crowd in February.

Democracy, according to Santorum, is underpinned by faith. And he’s not entirely wrong. Mahatma Gandhi’s noncooperation movement against British imperialism was predicated on the principles of Hindu dharma, and Rev. Martin Luther King Jr. organized against political disenfranchisement through a network of Baptist congregations. But to Santorum and his ilk, the roots of democracy are exclusively Christian. And one religion in particular represents the political antithesis: Islam. “[Equality] does not come from Islam,” Santorum said.

John Feffer’s new book, Crusade 2.0 (City Lights Books, March), tackles the West’s resurgent Islamophobia, critiquing the notion that Islam is innately hostile to democratic principles. From the medieval-era Crusades to the Cold War, Feffer argues, the Western imagination sees Islam through the prism of conflict, synthesizing the characteristics of historical enemies and projecting the result onto modern-day Muslims. Part doomsday religious adversary, part geopolitical menace, Islam satisfies a “cultural anxiety” in America that longs for a galvanizing enemy – the inverse of democratic and moral Christians.

Take the word “Islamofascism,” for example, which conflates contemporary Islamic movements with 20th-century fascism. Feffer, co-director of the Foreign Policy In Focus project at the Institute for Policy Studies, notes that the term – a favorite of the Right (and the late Christopher Hitchens) – is a “fusion of the theological and the geopolitical,” embodying a threat to the political structure that protects America’s Christian heritage.

The fear of political Islam has generated some rather extreme behavior: Four states have passed measures outlawing Sharia law. Oklahoma, which in 2010 passed its law, has a Muslim population of less than 1 percent. In the midst of the Park51 community center controversy, Newt Gingrich compared Islam to Nazi Germany. Europeans haven’t been much calmer: In 2009 Swiss voters approved a ban on the construction of minarets; there are four in the entire country.

What makes right-wing alarmism difficult to grasp is its timing: The recent uptick of Islamophobia coincides with a steady decline in domestic terror plots connected to Muslims. A study by the Triangle Center of Terrorism and Homeland Security found that the number of Muslim Americans involved in terror plots fell for a third year in a row, from 49 in 2009 to 20 in 2011. Of the 14,000 murders that occurred in the United States last year, none were connected to Islamic extremism. In Crusade 2.0, Feffer argues that Islamophobia is “sustained by U.S. government [foreign] policy” as well as the “growing economic, political and global influence of modern Islam.” In other words, having grown accustomed to the Muslim character of America’s global enemies, Islamophobes instinctively view the ascendancy of Muslim nations and the prospect of Islam-inspired democracies with trepidation.

GOP rhetoric offers evidence for this theory: Texas Gov. Rick Perry asserted that Turkey, a NATO member, is “ruled by what many would perceive to be Islamic terrorists.” Michele Bachmann blamed the Arab Spring on Obama administration “weakness.” Gingrich referred to the uprisings as the “Anti-Christian” Spring. Santorum claimed that Obama threw Mubarak “under the bus.” What all of these comments have in common is a distrust of Islam in politics. If you believe that Islam is incompatible with democracy, it makes perfect sense.

While the Obama administration may diverge from the Right’s shrill narrative, it nonetheless stifles democratic expression in the region. The president championed Egyptian President Hosni Mubarak’s ouster only after its inevitability became obvious; his verbal support for democratization contrasts with White House silence after Bahrain’s repressive regime violently attacked pro-democracy demonstrators on February 14. Obama’s circumspect approach may fulfill strategic objectives, but it also reinforces the notion that Muslims are less deserving of the same political treatment that Westerners enjoy.

To defuse the anti-Muslim prejudices still boiling in both the United States and Europe, Crusade 2.0 proposes three solutions: invite Islam into the Judeo-Christian tradition, end the U.S. occupations and admit Turkey into the European Union. Briefly mentioned at the book’s end, Feffer’s suggestions feel perfunctory, naive and somewhat dated. The Iraq occupation, for example, is effectively over, and a troop drawdown has begun in Afghanistan. Withdrawal from both quagmires will mean fewer U.S. troops are fighting Muslims. But the real chance to sap persistent Islamophobia lies in the promise of the Arab Spring – and whether Americans can both understand and respect fledgling Muslim-majority democracies in North Africa and the Middle East.