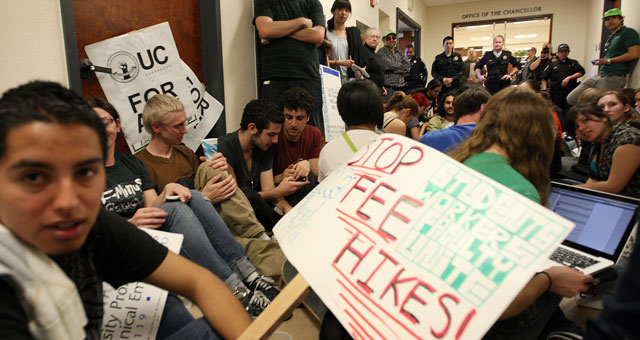 The Assault on Public Education

One of America’s greatest achievements is being defunded and degraded by the dictates of the marketplace.

Mass public education is one of the great achievements of American society.

Public education is under attack around the world, and in response, student protests have recently been held in Britain, Canada, Chile, Taiwan and elsewhere.

California is also a battleground. The Los Angeles Times reports on another chapter in the campaign to destroy what had been the greatest public higher education system in the world: “California State University officials announced plans to freeze enrollment next spring at most campuses and to wait-list all applicants the following fall pending the outcome of a proposed tax initiative on the November ballot.”

Similar defunding is under way nationwide. “In most states,” The New York Times reports, “it is now tuition payments, not state appropriations, that cover most of the budget,” so that “the era of affordable four-year public universities, heavily subsidized by the state, may be over.”

“There has been a shift from the belief that we as a nation benefit from higher education, to a belief that it’s the people receiving the education who primarily benefit and so they should foot the bill,” concludes Ronald G. Ehrenberg, a trustee of the State University system of New York and director of the Cornell Higher Education Research Institute.

A more accurate description, I think, is “Failure by Design,” the title of a recent study by the Economic Policy Institute, which has long been a major source of reliable information and analysis on the state of the economy.

The EPI study reviews the consequences of the transformation of the economy a generation ago from domestic production to financialization and offshoring. By design; there have always been alternatives.

One primary justification for the design is what Nobel laureate Joseph Stiglitz called the “religion” that “markets lead to efficient outcomes,” which was recently dealt yet another crushing blow by the collapse of the housing bubble that was ignored on doctrinal grounds, triggering the current financial crisis.

Claims are also made about the alleged benefits of the radical expansion of financial institutions since the 1970s. A more convincing description was provided by Martin Wolf, senior economic correspondent for The Financial Times: “An out-of-control financial sector is eating out the modern market economy from inside, just as the larva of the spider wasp eats out the host in which it has been laid.”

The EPI study observes that the “Failure of Design” is class-based. For the designers, it has been a stunning success, as revealed by the astonishing concentration of wealth in the top 1 percent, in fact the top 0.1 percent, while the majority has been reduced to virtual stagnation or decline.

In short, when they have the opportunity, “the Masters of Mankind” pursue their “vile maxim” of “all for ourselves and nothing for other people,” as Adam Smith explained long ago.

Mass public education is one of the great achievements of American society. It has had many dimensions. One purpose was to prepare independent farmers for life as wage laborers who would tolerate what they regarded as virtual slavery.

The coercive element did not pass without notice. Ralph Waldo Emerson observed that political leaders call for popular education because they fear that “This country is filling up with thousands and millions of voters, and you must educate them to keep them from our throats.” But educated the right way: Limit their perspectives and understanding, discourage free and independent thought, and train them for obedience.

The “vile maxim” and its implementation have regularly called forth resistance, which in turn evokes the same fears among the elite. Forty years ago there was deep concern that the population was breaking free of apathy and obedience.

At the liberal internationalist extreme, the Trilateral Commission–the nongovernmental policy group from which the Carter Administration was largely drawn – issued stern warnings in 1975 that there is too much democracy, in part due to the failures of the institutions responsible for “the indoctrination of the young.” On the right, an important 1971 memorandum by Lewis Powell, directed to the U.S. Chamber of Commerce, the main business lobby, wailed that radicals were taking over everything – universities, media, government, etc. – and called on the business community to use its economic power to reverse the attack on our prized way of life – which he knew well. As a lobbyist for the tobacco industry, he was quite familiar with the workings of the nanny state for the rich that he called “the free market.”

Since then, many measures have been taken to restore discipline. One is the crusade for privatization – placing control in reliable hands.

Another is sharp increases in tuition, up nearly 600 percent since 1980. These produce a higher education system with “far more economic stratification than is true of any other country,” according to Jane Wellman, former director of the Delta Cost Project, which monitors these issues. Tuition increases trap students into long-term debt and hence subordination to private power.

Justifications are offered on economic grounds, but are singularly unconvincing. In countries rich to poor, including Mexico next-door, tuition remains free or nominal. That was true as well in the United States itself when it was a much poorer country after World War II and huge numbers of students were able to enter college under the GI bill – a factor in uniquely high economic growth, even putting aside the significance in improving lives.

Another device is the corporatization of the universities. That has led to a dramatic increase in layers of administration, often professional instead of drawn from the faculty as before; and to imposition of a business culture of “efficiency” – an ideological notion, not just an economic one.

One illustration is the decision of state colleges to eliminate programs in nursing, engineering and computer science, because they are costly – and happen to be the professions where there is a labor shortage, as The New York Times reports. The decision harms the society but conforms to the business ideology of short-term gain without regard for human consequences, in accord with the vile maxim.

Some of the most insidious effects are on teaching and monitoring. The Enlightenment ideal of education was captured in the image of education as laying down a string that students follow in their own ways, developing their creativity and independence of mind.

The alternative, to be rejected, is the image of pouring water into a vessel – and a very leaky one, as all of us know from experience. The latter approach includes teaching to test and other mechanisms that destroy students’ interest and seek to fit them into a mold, easily controlled. All too familiar today.