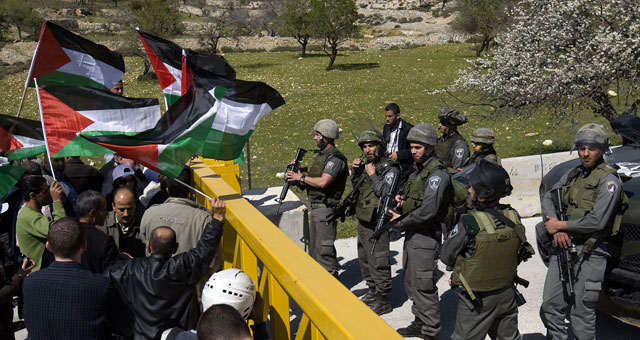 Israeli soldiers stand guard opposite Palestinians protesting the relocation of an Israeli road gate in Beit Iksa in the occupied West Bank, on March 22. A recent decision by Israel to build a separation barrier between the village and Jerusalem has effectively put Beit Iksa under Israeli occupation. (AHMAD GHARABLI/AFP/Getty Images)

Casting Jews as permanent victims is both outdated and counterproductive to the country’s well-being.

Fulfilling the promise of a Jewish state and safeguarding the country requires not only negotiations with Palestinian leaders. It also requires a new narrative to replace Israel's permanent victim/perpetual outcast story.

The first time I visited Israel I was shocked by many things. Most disturbing was the narrative of Masada – the story of Jews in the 1st century A.D. who holed up on a mountain top while battling Rome’s Tenth Legion and committed what was essentially mass suicide rather than surrender or compromise their religion. I attended Jewish Day School until the age of eight, and Sunday school until the age of 18, but somehow hadn’t encountered this story before.

In late March, while attending a wonderful three-day J Street conference (titled “Making History”), I heard similar narratives—some just as disturbing. In particular, Deputy Ambassador of Israel Barukh Binah used his time as a guest speaker to not only attack J Street and Zionist writer and journalist Peter Beinart–whose new book is The Crisis of Zionism–but to provide a worldview closely resembling the Masada story.

In Binah’s tale (obviously the official line of the Netanyahu government) Jews have gained little since the 1930s. We remain a beleaguered group, with an uncontested and sole right to the land on which the state (ever expanding as it is) is placed, beset on every side by those who would exterminate us, and where only strict and blind adherence to the official line of the state deem one worthy of being called a friend of Israel. In fact, those who disagree with Israel’s strategy and tactics are considered just as worthy of attack as the states and governments that Israeli officials describe as existential threats.

Despite the fact that Israel is now a well-armed (nuclear) sovereign state, both narratives lock Israel and Jews into permanent victim status–a lens that could lead to a self-fulfilling prophecy.

To its inhabitants and to Jews around the world, Israel has always been more than a piece of land. Rather, as dreamed of by Zionists, sought as a refuge in 1945 by the survivors of the Shoah, and as embedded in its Declaration of Independence in 1948, Israel was to be a Jewish and democratic state – a homeland for all Jews guaranteeing that those who were not Jewish could also find equal treatment and opportunity there.

Today, that state is in danger. The occupation of the West Bank and the Gaza Strip that followed the 1967 Arab-Israeli War, combined with intrusive, less-than-legal settlements, have made non-Jewish Arabs a significant minority (one-third the population in Jerusalem, 20 percent of those living inside Israel’s original borders, and 50 percent of the population in Israel’s expanded footprint). The only thing that keeps the assembled territory “Jewish” today is the fact that Arab citizens in the West Bank and Gaza Strip are denied citizenship – unable to buy land inside Israel, denied passports and unable to vote in national elections.

In other words, Israel is violating its commitment to democracy to maintain its Jewish character. Given existing territorial claims, should the state wish to live up to its pledge and commitment to democracy for all within its borders, Israel would no longer be a Jewish state. Israel’s status quo – leading to either a nondemocratic state of a non-Jewish state – is unsustainable. The occupation not only flies in the face of the country’s democratic ideals, it serves to prop up demagogues in other places in the Middle East and increasingly subverts Israeli civil society – from hostile legislation aimed at NGOs critical of state policy, to the growth of a roster of “enemies” that includes people and organizations in various countries, to the unholy alliance with ultra-orthodox Jews who are hardly outdone in their attempts to restrict women’s rights by mullahs in neighboring nations.

Only ending the occupation and endorsing the establishment of a Palestinian state can assure the fulfillment of the promise of a Jewish state and lessen the hostility and danger to Israel, both from Palestinians and despots who use current Israeli policy and actions to prop up their own regimes.

This solution, however, requires not only negotiations with Palestinian leaders. It also requires a new narrative to replace Israel’s permanent victim/perpetual outcast story.

What might that be? I would choose the narrative taught to me long ago by teachers who had been the first inhabitants of the young state of Israel. Their narrative was that a strong band of pioneers, powered by intellect, compassion and the Jewish mandate “to always choose life,” left the ghettos of Europe behind and built a powerful state in the desert, making land and a new society flourish.

From this point of strength, and acknowledging Israel’s current military and economic power, this narrative would affirm that Israel has the self-confidence to recognize and honor the legitimate claims of others–knowing from 5,000 years of history that without justice, there can be no lasting peace.