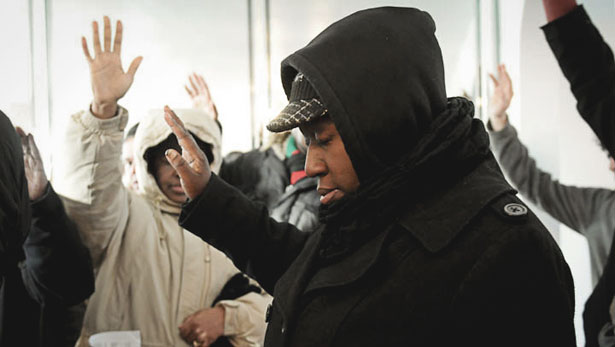 Tene Smith prays at a press conference outside her re-occupied home on January 19. (Photo courtesy of Liberate the Southside)

No Vacancies: Squatters Move In

Growing movements on both sides of the Atlantic try to turn bank-owned houses into homes.

In the U.S. today, a new wave of squatters is moving into vacant foreclosed properties in cities like Chicago, New York and Minneapolis.

After three years of staying in her sister’s living room, Tene Smith decided to move her family into a home that had sat vacant on Chicago’s South Side for more than two years.

With the help of Liberate the South Side, a Chicago-based organization that targets vacant homes for re-occupation and spent months renovating the house, Smith and her three children moved in during a public ceremony attended by community members and the media in January 2012. “I was fearful when I first made this commitment,” she told In These Times, “but as the days passed I had a sense of independence that had eluded me for a long time.”

The term “squatter” conjures images of the predominantly young, urban hipsters who in decades past claimed vacant property in areas such as New York City’s Lower East Side. But with five times as many vacant homes as homeless people in the U.S. today, a new wave of squatters – just as likely to be hard-hit families like Smith’s as young activists making a political statement – is moving into vacant foreclosed properties in cities like Chicago, New York and Minneapolis.

Today’s housing movement has yet to approach the pace of its predecessors – historians Richard Boyer and Herbert Morais estimate that in 1932, unemployed workers’ councils moved 77,000 evicted families back into their homes in New York City alone. But buoyed by the support of the Occupy movement, housing rights groups have stepped up their efforts.

With more than 1 billion people worldwide now living in informal settlements, journalist Robert Neuwirth argues that squatters’ communities are among the primary creators of housing in the developing world. Now, in the context of a global foreclosure crisis, a squatters’ movement is emerging across the developed world to claim otherwise vacant buildings as homes.

In Spain, established squatters’ networks have converged with the M-15 movement of “indignados.” “Squatting is more connected to radical politics and autonomist movements in Spain,” explains Miguel Ángel Mart’nez, a sociologist at Madrid’s Complutense University, “but it was adopted by M-15 because they experienced the tragedy of so many people attending the assemblies and asking for help while they were living on the streets or under threat of being put there.”

An estimated 350,000 evictions have taken place in Spain since 2007. The collaboration between experienced squatters and M-15 activists has produced, among other things, highly functional “squatting offices” in major cities that coordinate information on empty buildings and offer consultations to people who wish to squat.

In Ireland, squatters linked to the Occupy movement have begun taking over the thousands of properties that speculators handed to the National Assets Management Agency (NAMA), a national bank created to buy up bad property development loans after the housing market crash. In Cork, activists occupied a NAMA building in January and converted it into a community resource center with a library and free counseling services.

In countries with older, more visible squatter cultures, laws tend to be more lax and the possibilities of occupying vacant buildings for community centers greater. Though many U.S. states have “squatter’s laws” stipulating that occupants who have been in a property for more than 30 days can only be evicted through a formal legal process, the ambiguity surrounding the situation can be dangerous for families living in vacant homes.

After Tene Smith and her family had been occupying their new home for more than a month, its long-absent owner, who had fallen into foreclosure in 2007, re-emerged. Smith decided to leave, acknowledging that “our fight was with the bank and not the homeowner.” But Liberate the South Side told In These Times that because the house was suddenly put for sale in February, they suspect that Bank of America, the mortage servicer of the house, offered to negotiate with the homeowner only after Smith moved in in January. (The bank did not respond to a request for comment.)

Housing groups have in the past two years won a string of less ambiguous victories by pressuring banks to reduce the principal of mortgage holders in foreclosure. For the first time, politicians are calling for a large-scale principal write-down. But Max Rameau, an organizer with the housing rights group Take Back the Land, says it would be a shame if the movement were to stop there. “If the government puts out a principal reduction offer, and the movement jumps on it and … does nothing for the low-income people of color who suffered the most under this crisis, that will be a real sellout,” he says.

Rameau, who has been moving people into vacant homes and doing eviction defenses with Take Back the Land since 2007, says that principal reduction only helps homeowners who are employed, and does nothing for the public housing residents facing a crisis that is “objectively worse” than the foreclosure crisis.

Though the mortgage crisis has created political space for a movement to emerge, Rameau says that the ultimate goal is to create more affordable housing and to give communities control over how it is managed. “Our real objective is not to target banks,” he concludes. “Our real objective is to fulfill the human right to housing.”