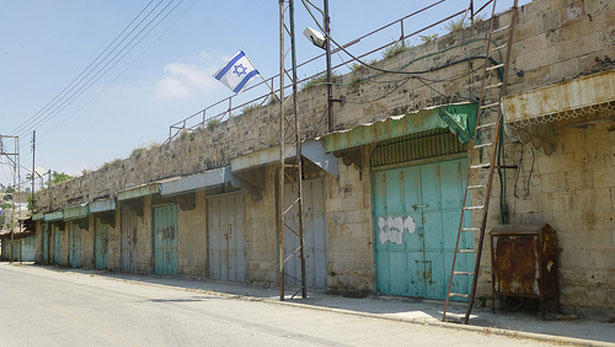 In May, the author spent ten days traveling around Israel, Palestine and Jordan with the liberal pro-Israel advocacy organization J Street. What follows are excerpts from the journal she kept during her trip.

We leave Tel Aviv, a sun-drenched city filled with beaches, high rises and casually-dressed Israelis, on the only road across the West Bank to Jerusalem. It’s a slick highway surrounded on all sides by a “fence” – in some places cement and in other places barbed wire, dotted with armed checkpoints. On the side of the road, Palestinian men walk through a narrow barbed wire pathway, some carrying bags, others carrying furniture. The road, I’m told, is for Israeli citizens only—those Palestinians who have permission to work in Israel must park their vehicles elsewhere, pass through a check point and board buses that exit the road shortly thereafter.

What is the purpose of this fencing? The ostensible reason—security—is less than convincing. The fences are made of barbed wire; anyone wishing to damage a road or a village could easily shoot over or through it, or simply take the risk of being cut. My guides estimate that thousands of Palestinians “penetrate” these fences to reach Israel each day. More than anything it appears that these fences are cages, locking people in, restricting their movement and ultimately making them prisoners in their own land.

On to Jerusalem. When I was here 10 years ago, I saw many Palestinians working throughout the city. Today, I am struck not only by the absence of Palestinians and Israeli Arabs, but by the massive numbers of Haredi and other Ultra-Orthodox Jews. With an average of eight children per family, the Haredi and other Ultra-Orthodox Jews are the fastest growing segment of the Israeli population, and they are a huge factor in Israeli politics and a huge drain on the economy and political life. Some of the Ultra-Orthodox, particularly the Haredi men, do not work and have been exempted from military service so that they can “study.” They all receive a government stipend for each child born. Due to their growing numbers, they have a big influence in the parliament and in the military.

Just returned from a day in the West Bank. Since the 1993 Oslo Accords (which were meant to be only an interim step), the West Bank has been divided into three areas: “Area A” (large cities under the full control of the Palestinian Authority), “Area B” (smaller cities and villages supposedly under Palestinian civil authority and Israel Defense Forces (IDF) military authority), and “Area C” (the rest of the West Bank, which includes farms, villages, and individual houses the Israelis claim to be uninhabited, and which is under the complete control of the IDF).

Today, visiting Kafr-a-Dik, a Palestinian village about 20 minutes from Tel Aviv, I got a pretty good sense of what occupation means. We had lunch in the hills outside the village at the site of a summer “tea house” that had been razed the week before by the IDF. The young children of the family who built the house, which they used for shelter and rest while tending their olive trees, told us they came here last week after school only to find their “shelter” gone. It turns out that while they were at school, hundreds of IDF soldiers descended on the spot with bulldozers, destroying the shelter and the 250-year-old well along with the walled terrace that had protected the olive trees for centuries.

How to consider Israel? It is a land of more than one reality—particularly since the Second Intifada of 2000, after which Palestinians could no longer travel freely through the country, and after which Israelis did not even go to East Jerusalem, which is like living in the New York’s East Village and never visiting the West Village.

Life in Jerusalem is pretty much like life in any urban center, except for the ever-visible presence of the Haredim, and their reflection in the larger society—there are no billboards with women on them, many radio stations do not play songs in which women sing, and on some bus routes, women are relegated to the back of the bus, despite a Supreme Court ban on the practice.

What is different is the absolute absence of the Other. As Palestinians are barred from entry to Israel, people in general don’t have to think about them, and there is a generation of young Israelis who may have never seen or met one.

In some ways it is not so different from those who live in American suburbs or rural areas and who rarely see anyone who is not like themselves. The situation in Israel is more pronounced, and is true in the cities as well as the suburbs. Ironically, it is probably only the Jewish settlers in the West Bank who have any real continuous “contact” with Palestinians, and then only as occupier of the land or as employer of menial labor —since Palestinians cannot enter Israeli cities, their only work is either in their villages for the Palestinian Authority, or as gardeners, etc., in settlers’ villages (with special work and travel permits, of course).

After a fascinating morning meeting with the son of assassinated Israeli leader Yitzhak Rabin and other leaders across the political spectrum (with as many views as there were people in the room), we took an afternoon walk to Jaffa, the original Arab port just north of Tel Aviv, where most Jews landed when they came in the 1880s. An ancient city, Jaffa was home to 100,000 Arabs in 1948, before the war. Today, only 6,000 remain.

Dinner was at the sumptuous Tel Aviv home of an Israeli businessman. We were joined by four other “progressive” Israeli businessmen, the heads of hedge and equity funds, all of whom do business with Palestinians and with Arab countries. Three of the four, including the son of a former prime minister, are virtually uninvolved in politics and think that the market, with its lack of borders and its commitment to “innovation,” will simply take care of the issue. The most loquacious of them thinks the wall separating Palestinians from Israelis has actually helped both communities and that in separation, each population is beginning to thrive.

When I returned to my room, I wanted to see whether the most articulate and powerful speaker among these men, the one who stated that the wall has helped both Palestinians and Israelis, could have a point. The bottom line: GDP in Israel is $31,000 per capita; in the West Bank it is $2,900.

That’s all for my Sunday report.

Today we traveled to Jordan, a stunningly beautiful country. Our first meeting was with King Abdullah, who turned out to be an exceedingly smart, thoughtful and engaging man. Needless to say, the palace was gorgeous. What could be bad about sipping tea from a gold-embossed glass in a room that makes the Metropolitan Museum of Art’s exhibit on Middle Eastern decorative arts look shabby?

We met with the king and the prime minister for about an hour. On Israel, the king was probably the most optimistic person we spoke to all day—and that wasn’t very optimistic. It is his opinion – and pretty much everyone’s we talked to – that the window for a possible two-state solution is closing fast, with Israel having totally rebuffed (to date) the Arab Peace Initiative, with Palestinians chaffing under accords that were meant to last two years, not two decades, and with the Arab Spring asserting itself as alternative mode of achieving change. He thinks, as do others, that the growth of Jewish settlements in the occupied territories and of the Palestinian population under occupation is such that if we don’t reach a two-state solution by 2013, the only options will be a dual national state (untenable for the Israelis) or an apartheid state (simply untenable).

Then on to dinner at the home of a former Jordanian Ambassador, joined by 20 other ex-ambassadors, sitting senators and leaders of Jordanian society. It was a sobering conversation. Contrary to the happy talk of the Israeli businessmen about “joint endeavors with the Arab world,” these business and political leaders have pretty much given up on Israel (despite many years of investment in the prospects and endeavor to find peace). They do not believe that the government in Israel is interested in peace, and they feel that the demographics of the West Bank settlements, which have brought more than 500,000 hard-line settlers to the occupied territories, will continue to give right-wingers the vote. They believe that the total separation of Israelis from Palestinians is breeding a new generation that could care less about peace, and that the Arab world and the Palestinians will just give up on Israel as a “member state of the region,” since it appears to them not to be interested in being one. They are horrified by the occupation and actions of the Israelis, even while understanding Israel’s legitimate desire for a state. They also rue the retreat into fundamentalism and extremism in both the Jewish and Muslim communities.