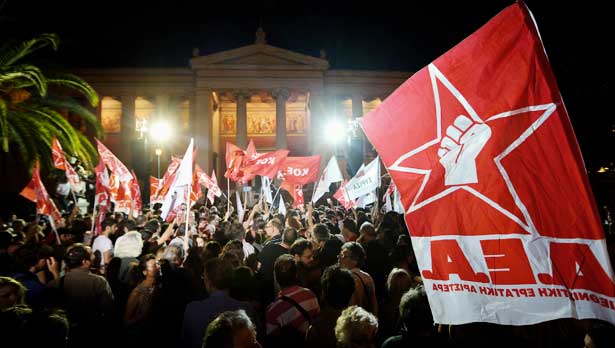 Supporters of the Syriza party wave flags at a rally outside a university building following an expected second place in the general election on June 17, in Athens. (Photo by Oli Scarff/Getty Images)

How long can the Eurocrats in Brussels keep the dinnerware in motion?

The outcome of the June 17 Greek election—a narrow victory for the conservative New Democracy over the leftist Syriza party, and the prompt formation of a “pro-European” coalition government—predictably unleashed a gigantic sigh of relief all over Europe. The catastrophe was averted, European unity had prevailed, etc. But, in fact, a great opportunity was missed, a unique chance for Europe to finally confront the depth of its economic and political deadlock. The sigh of relief effectively meant: We avoided the awakening. We can continue to dream.

CNN’s Richard Quest recently offered a metaphor for this dream when he compared the European officials to:

[T]he proverbial “plate spinners” from the circus. Those talented artists who balance spinning plates on sticks, ever increasing the number of sticks, rushing from one to the other, giving them a tug and pull to keep them moving, always aware that if they are too slow or too fast, one of the plates will crash to the ground. That is exactly what we have in Europe today. Only the artists are European Central Bank president Mario Draghi, Eurogroup head Jean-Claude Juncker, European Commission president José Manuel Barroso et al, while the plates are Greece, Spanish banks, Italian deficits, eurobonds and German chancellor Angela Merkel. … Daily it seems there are more plates spinning, and the antics of the spinners become more frantic as they rush from one to the other, ever proclaiming that the act is coming to a close. Unfortunately that is not the case. The plate spinning is likely to continue for some time to come.

Spinning plates is effectively what the Brussels Eurocrats are doing: endlessly postponing the critical reckoning by way of adding new plates and thus making the balance more and more fragile. Syriza was accused of promoting leftist fictions—but it is the austerity plan imposed by Brussels that is a fiction. In a strange gesture of collective make-believe, everyone knows that the Greek state cannot ever repay its debt, and everyone ignores the obvious nonsense of the financial projections on which the plans are based.

So why does Brussels impose these plans? What matters in contemporary capitalism is that agents act upon their putative beliefs about future prospects, regardless of whether they really believe in those prospects. And, as we also all know, the true aim of these rescue measures is not to save Greece, but to save the European banks.

There is a wonderfully dialectical joke in Ernst Lubitsch’s classic comedy Ninotchka: the hero visits a cafeteria and orders coffee without cream; the waiter replies: “I’m sorry, sir, we have no cream. Can it be without milk?” In both cases, the customer gets coffee alone, but this single coffee is each time accompanied by a different negation, first coffee-with-no-cream, then coffee-with-no-milk.

Greece is in the same predicament: The situation is difficult, and Greeks will get some kind of austerity—but will they get that austerity without cream or without milk? It is here that the European establishment is cheating. It is acting as if Greeks will get the coffee of austerity without cream (that the fruits of their hardship will not profit only European banks but also themselves), but they are effectively offering Greeks coffee without milk (only the banks, and not the Greeks, will profit from this hardship).

To illustrate the mistake of enacting austerity measures as the main strategy to combat the crisis, Paul Krugman often compares them to the medieval cure of blood-letting. That’s a nice metaphor that should be radicalized even further. The European financial doctors, who are themselves not sure about how the medicine works, are using the Greeks as test rabbits and letting their blood, not the blood of their own countries. There is no blood-letting for the great German and French banks—on the contrary, they are getting continuous and enormous transfusions.

Syriza is not a group of dangerous “extremists.” Rather, it is bringing pragmatic common sense to clear the mess created by others. It is those who impose austerity measures who are dangerous dreamers, who think that things can go on indefinitely the way they are, just with some cosmetic changes. Syriza supporters are not dreamers—they are the awakening from a dream which is turning into a nightmare. They are not destroying anything, they are reacting to a system that is gradually destroying itself.

Syriza is a radical Left movement that stepped out of the comfortable position of marginal resistance and courageously signaled their readiness to take power. This is why, according to some, the Greeks should be penalized—or, as Bill Frezza recently wrote in Forbes, under the headline, “Give Greece What It Deserves: Communism”: “What the world needs, lest we forget, is a contemporary example of Communism in action. What better candidate than Greece? … Just toss them out of the European Union, cut off the flow of free Euros, and hand them back the printing plates for their old drachmas. Then stand back for a generation and watch.” The old story of Haiti after 1804 repeats itself here: Greece should be exemplarily punished to block once and for all any temptation for a radical Left solution to the crisis.

Some have argued Syriza lacks the proper experience to govern, and this should be admitted: Yes, they lack the experience in how to bankrupt a country, in how to cheat and to steal. This brings us to the absurdity of the European establishment’s politics: They preach the dogma of paying taxes—and against Greece’s institutional corruption—and put all their hopes on the coalition of the two parties that institutionalized that corruption in the first place. The New Democracy victory was the result of a brutal campaign full of lies and scare-mongering—the politics of fear at its purest, drawing a picture of Greece with hunger, chaos and police state terror in the case of the Syriza victory.

The EU pressure on Greece to implement austerity measures fits perfectly with what psychoanalysis calls superego. Superego is not an ethical agency proper, but a sadistic agent that bombards the subject with impossible demands, obscenely enjoying the subject’s failure to comply with them. The paradox of the superego is that, as Freud saw clearly, the more we obey its demands, the guiltier we feel. Imagine a vicious teacher who imposes on his pupils impossible tasks, and then takes pleasure in jeering when he sees their anxiety and panic. This is what is so terribly wrong with the EU demands: their austerity policies don’t even give Greece a chance—its failure is part of the game.