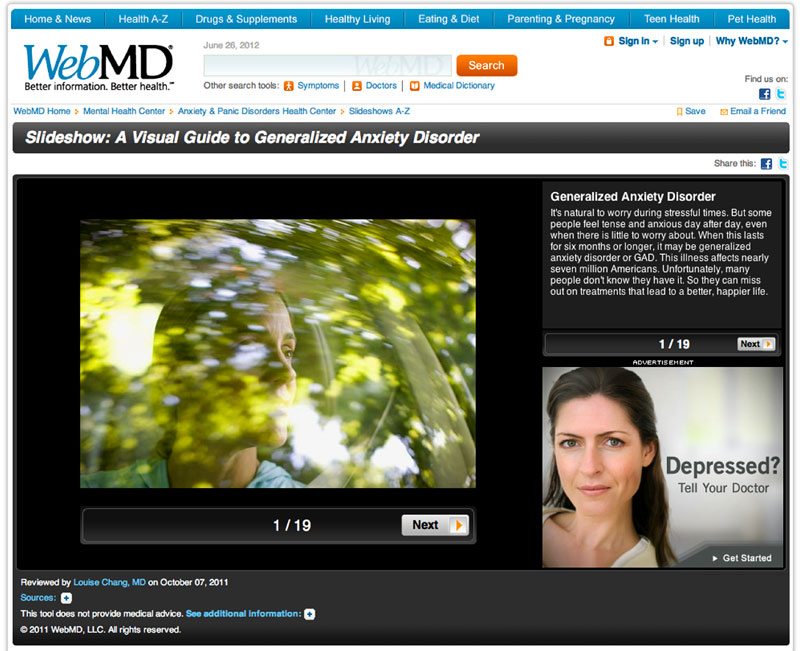 After it was nailed for servicing BigPharma, WebMD, the popular medical and health information/advice site, gave itself an ethical makeover. Now, like a prostitute dressed by Talbot’s, WebMD is more subtle, if not less whorish.

The precipitating event for WebMD’s touch-up was the furor around a 2010 online questionnaire sponsored by Eli Lilly, one of WebMD’s original partners. No matter how you answered the quiz, it diagnosed depression and linked you to a river of pills.

Faced with Byzantine health insurance, or none at all, people are increasingly going online to diagnose their real and imagined ills. WebMD “reach[es] 95 percent of all adult Americans looking for health information online each year, [and] 72 percent of physicians recommend WebMD.com to their patients,” WebMD’s then-CEO Wayne Gattinella wrote to Sen. Charles Grassley after the Lilly questionnaire sparked the Iowa Republican to launch an investigation.

Gattinella, a marketing executive at various drug companies before joining WebMD, was not coy about WebMD’s financial model. “We generate revenues primarily through the sale of advertising and sponsorship programs to pharmaceutical, biotechnology, medical device companies, and [health, diet and fitness-related] consumer products, [as well as] licensing content to insurance companies and health plans.”

It’s unlikely that WebMD’s new CEO, Cavan Redmond, appointed on May 31, will end the insalubrious industry hookups. Redmond, who has also worked at Wyeth and Sandoz, moved to WebMD from a senior executive position at Pfizer’s marketing arm. That gig, the trade website Medical Marketing and Media noted, will give him “a keen understanding of what [WebMD’s] advertisers want.”

What consumers want is sound, independent information. But they, along with experts and doctors, are bombarded with manipulative advertising and industry-funded drug and device studies that can incorporate shady or even illegal tactics to obscure bad science and conflicts of interest.

Industry-funded, ad-reliant medical websites such as WebMD reflect the same market pressures and biases. Some WebMD ads are annoying but obvious. Others, barely set off by the word “advertisement” in minuscule pale gray type, blend into edited news and features. More insidious is content wholly generated by advertisers, which, despite being labeled “sponsored,” is often set in the same font, colors and style as WebMD’s “independent” information.

WebMD’s section “Close the Gap” offers one small example of how the new “subtle” works. It examines the special burden of heart disease on blacks, Latinos and other minorities. Although part of the WebMD site, the section is actually created and sponsored by Boston Scientific, which sells almost $8 billion annually in medical devices, especially those related to cardiac surgery. You need to click on a link to reveal the disclaimer that content “is not reviewed by the WebMD Editorial department for accuracy, objectivity or balance.”

Visitors to “Close the Gap” who are concerned about heart disease can also click to find a list of a few dozen featured doctors. These physicians, the site notes, “are not paid any fees for inclusion to either WebMD or Boston Scientific.” But that policy does not exclude other rewards: Seven of the highlighted doctors are members of Boston Scientific’s 17-person steering committee. (One, Cam Patterson, racked up more than $78,000 in speaking and other fees from Pfizer in a little more than a year, according to ProPublica’s Dollars for Doctors database.) WebMD “news” videos have also featured six Boston Science steering committee members as experts on a variety of topics.

Is it a coincidence that WebMD’s chosen experts are affiliated with a major advertiser, Boston Scientific—which in turn just happens to list members of its steering committee as go-to docs?

With its history of scandals and sleazy deals, Boston Scientific has not earned the benefit of the doubt. In 2010, the U.S. government fined Boston Scientific (which acquired Guidant in 2006) $22 million for paying doctors to implant Guidant-manufactured devices, including defibrillators and pacemakers, into heart patients. While the doctors incurred no punishment for accepting these apparent bribes, Army cardiologist Maj. Jason Davis faced a stricter ethical environment. He was found guilty of accepting cash payments, extravagant meals and other gifts to use Boston Scientific devices on, among others, wounded veterans.

Davis violated a “bright line rule,” said U.S. Attorney Jenny A. Durkan. “Military doctors must owe their allegiance to the soldiers and families they treat—not to drug companies or makers of medical devices.” As part of the judgment, Boston Scientific is required  to post all payments to healthcare professionals. In 2011, the typical payout was $500 or less, but some topped $10,000. The list that year had more than 48,000 names.

Other major WebMD advertising sources include the nutrition and diet industry, along with processed-food manufacturers. Numerous WebMD news videos and stories tacitly endorse fast food by posing misleading questions such as “Fast-Food French Fries: Which Are Healthiest?” In “Fast Food Survival,” the only quoted expert, “Jodie Worrell, RD, Chick-fil-A dietitian,” praises the healthiness of her company’s chicken sandwich.

On WebMD’s U.K. site (called BootsWebMD after the pharmacy chain that cosponsors it), a Kellogg’s-funded “advertorial” asserts that a “panel of world health experts … concluded that a high sugar intake is not related to the development of heart disease, diabetes, high blood pressure or cancer.” And that Kellogg’s breakfast cereals, some packing more sugar than a Twinkie, “do not increase the risk of tooth decay” when eaten with milk. (Insert British dental joke here.)

The deeper problem is not the soundness of WebMD’s information. Rather, the site’s often-useful material and reasonable blandness promote trust that makes it easier to steer visitors to sponsors, and sometimes to frighten them toward unnecessary testing, procedures and drugs.

WedMD’s extensive data mining provides another problematic revenue stream. When visitors research embarrassing, or insurance- and job-threatening conditions, that information—along with data from the site’s many questionnaires and quizzes—is collected, used internally and sold. WedMD’s privacy policy warns that the site collects “personal information” when you sign up for its newsletters or use its many services, such as “Email a Friend” or the “Ovulation/Pregnancy Calendar.” WebMD also collects “non-personal information” from “external sources, even if you have not registered with or provided any personal information to WebMD.” Although the site pledges privacy for children, visitors who describe themselves as over 12 relinquish control over how their information is used.

Meanwhile, WebMD is having its own health problems. Redmond addressed “our declining revenues” in a July 31 company conference call. The new CEO blamed the company’s failure to “anticipate the unprecedented reduction in overall spending” by the biopharmaceutical industry, which has seen many of its blockbuster drugs displaced by cheaper generics.

Redmond is looking to mobile apps, “diversifying our customer base” and “consumer products” to cure what ails the company.

“As the biopharmaceutical commercial model continues to evolve, WebMD can capitalize on these changes,” Redmond said in the company’s June 1 press release announcing his taking the helm. “WebMD is driving innovation in the rapidly changing healthcare market … for consumers, physicians and healthcare companies.”

And therein lies the problem: the fundamental conflict between a business model that is reliant on pleasing BigPharma and other advertisers, and unbiased healthcare information that serves the public.