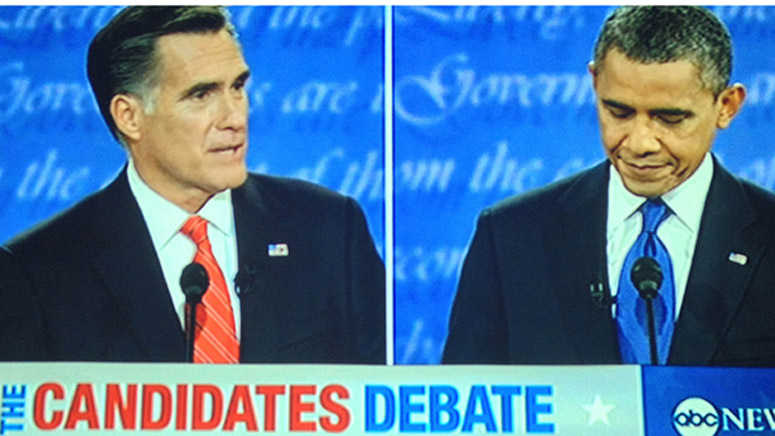 Obama’s lackluster performance came straight out of decades of Democratic backpedaling. Will he show backbone in debate two?

Is it too much to ask that the president, at least for two hours of debate, stand up for what his supporters believe in?

All the handwringing about President Obama’s disastrous debate performance—his disengaged demeanor, lack of energy and failure to call out Romney’s lies—avoids a much deeper and more troubling issue. The president’s passion-free performance speaks to the larger problem of the flight of many Democrats—actually the party itself—from a politics rooted in conviction. Just as an army battalion cannot defend a garrison while fleeing from it, Democrats cannot defend progressive ideals while running from them.

A charitable interpretation of Obama’s lackluster debate in Denver is that he was unprepared, but this only highlights the problem: Democrats no longer speak as true believers in social and economic justice. Caught in a jam, true believers will rely on their innermost instincts. Why didn’t President Obama?

The president could be forgiven if he just forgot some policy details he had been coached on. He is, after all, human. But key moments in his debate with Mitt Romney didn’t require crammed talking points, but rather the summoning of one’s instincts—gut reactions no coach can teach. This is when a candidate’s political DNA is revealed.

Romney’s instincts, his visceral proclivity toward lying, kicked in, and it served him well all night. By contrast, at critical times when the president (presumably the more progressive candidate), might have engaged his instincts, he seemed paralyzed. This was not due to his lack of preparation, but to the fact that on a broad spectrum of issues, including union rights, Obama’s political DNA simply does not comport with what he needed to say.

The president could have invoked union rights to counter Romney’s sanctimonious protestations about rising poverty and declining wages. But he did not, because union rights no longer loom large in his, or the Democratic Party’s priorities. The jettisoning of the Employee Free Choice Act by Democrats in 2010—a bill aimed at strengthening and expanding union rights—and the recent attack on the Chicago Teachers Union by Mayor Rahm Emanuel, a Democrat, are a stark reminder.

Having diluted their historical commitment to labor rights, Democrats forfeited one of the most reliable weapons in policy debates with the GOP on the economy. Thus, President Obama stood helpless as Mitt Romney lectured to him about American workers losing ground. Yes, a corporate raider and poster boy for outsourcing, off-shoring and dismantling of good-paying manufacturing jobs was bemoaning the immiseration of American workers—and indicting a Democratic president for it!

But instead of seizing the moment to school his GOP opponent on the causal relationship between poverty, declining wages and the evisceration of union rights, a hapless-seeming Obama avoided the subject altogether. For two full hours, our Democratic president could not bring himself to mention “labor unions” in a debate purportedly about the economy.

Others will analyze why President Obama never referenced the many things foisted on him by the corporate-coddling, profligate GOP administration before him: a near-Depression, two wars fought on credit, a $300 billion Medicare prescription drug giveaway to Big Pharma, and two tax cuts for the richest Americans. Or why he failed to dispute Romney’s string of false claims. Obama did not cut $716 billion from Medicare. He took back overpayments to insurance companies and medical suppliers, and cycled the money back into Medicare through preventive care to seniors. In fact, this claim had been so thoroughly discredited that even before the debate, President Obama was running ahead of Romney in Florida, a bellwether state for Medicare politics. Yet he failed to fire back when Romney referred to the $716 billion as a “cut” eight times.

Romney’s claim that “about half” of clean-energy companies that received government-backed loans under Obama “have gone out of business” was disputed by Factcheck.org, which found that 26 companies received loan guarantees, but only three filed for bankruptcy. Romney also lied about Obama putting $90 billion “into solar and wind.” Factcheck.org again noted that only $21 billion went for renewable energy projects “such as the installation of wind turbines and solar panels”; the rest of the $90 billion went to other projects, such as $18 billion for mass transit and $10 billion to upgrade the country’s electrical grid. But in both cases, Obama let the numbers slide.

Some of the president’s defenders opined that the country’s unspoken proscription against the public expression of anger by black men hindered a more robust debate performance by Obama. But that’s just crazy. It did not require an angry outburst from Barack Obama to refute these false claims. Furthermore, the extreme sensitivity toward white voters increasingly smacks of condescension and, quite frankly, infantilization. This president survived a nasty campaign against him by Republicans in 2008 because millions of white people, in a display of political maturity, voted for him. Given Romney’s reliance on a maddening strategy of lying on purpose, white voters should be trusted to excuse this black president if he showed a little emotion.

Obama did not fail in the debate because of a lack of preparation or because of some unspoken social norm. His performance was the embodiment of Democratic ambivalence and diffidence on core progressive policy issues that has been crystallizing for 30 years. Democrats have been dabbling in all manner of corporatist, neoliberal and conservative ideas: privatization of public services, deregulation, union-busting, “free trade,” aversion to environmentalism, relativism on human rights, appetite for wars, and so on. They show no interest in credible climate mitigation strategies and hardly talk about raising the minimum wage. Democrats have pretended to be the custodians of progressivism in American politics while quietly giving away the store to corporate America, a reality loudly reaffirmed by the Wall Street bailouts and failure to reinvigorate labor laws long ignored and mocked by employers.

For additional evidence, look no further than the terms of U.S. bank and auto bailouts. Help for banks was not conditioned on caps to CEO compensation, but help for union auto workers was accompanied by deep cuts to pay and benefits. Perhaps a silver lining is that the bailout debate helped expose Democrats’ ambivalence about union rights. Time and again, Democratic leaders in Washington failed to defend labor in the face of false claims by the GOP that “big union contracts” caused the auto industry’s decline. As if it were auto workers, not CEOs, who failed to build hybrids and hoisted SUVs onto the American consumer just as oil prices were going up. With a few exceptions—count Mayor Virg Bernero of Lansing, Mich. among them—Democrats never rose to articulate a coherent defense of union workers.

The two tendencies within the Democratic Party—coddling corporate elites and defending progressive ideals—are incompatible and cannot coexist. In recent years the progressive tendency has been losing out, big time, leaving Democrats without a coherent and compelling vision for full-scale economic uplift for the masses. This explains the mind-boggling failure of the Democratic Party to rout a medievalist GOP in the throes of reactionary fever, fomented by anti-union, racist, misogynist, and xenophobic fanatics. What we saw in Barack Obama in Denver was emblematic of the confusion that sets in when there is a lack of clarity and certitude about what candidates really stands for. No consultants can help you fake sincerity, unless you are a sociopathic liar in the mold of Govs. Scott Walker and Mitt Romney.

It is time for a “heart to heart” between Democrats and their loyal base. The party leaders no longer fight with conviction for economic and social justice. When they do take positive progressive action (like defending immigrants or endorsing marriage equality) they are usually responding to pressure from social movements, or just following the winds of change. But on a raft of touchstone progressive issues, Democratic stewardship no longer comes naturally. Thus key constituencies such as African Americans, labor unions, environmentalists, immigrants, peace activists and young people—those who will once again do the work to get Obama reelected—are taken for granted. They are shunted aside in favor of a pragmatic politics aimed at illusive “Independents” who supposedly tip the electoral scales for the two major parties.

This very moment, as Democratic loyalists beat the pavement getting out the vote to secure Obama’s reelection, the president felt no pressure to show up and defend their beliefs in a hugely consequential debate. By the thousands, these loyal Democrats, many of modest means (that 47 percent) are out there busting their tails to get the president and down-ticket Democrats elected. Is it too much to ask that the president, at least for two hours of debate, stand up for what his supporters believe in?

With two more debates ahead, the president would do well to heed Massachusetts Gov. Deval Patrick's message to convention delegates in Charlotte: “It is time for Democrats to grow a backbone.” The president needs to trust that people are hungry for a sharp contrast between the parties and an unvarnished progressive message. This is a moment for Democrats to rethink their flirtations with neoliberalism and their long-time rightward drift. They must abandon the cynical politics of chasing after Independents at the expense of the broader masses. By so doing, they can invite back the legions of people who have opted out of American politics.