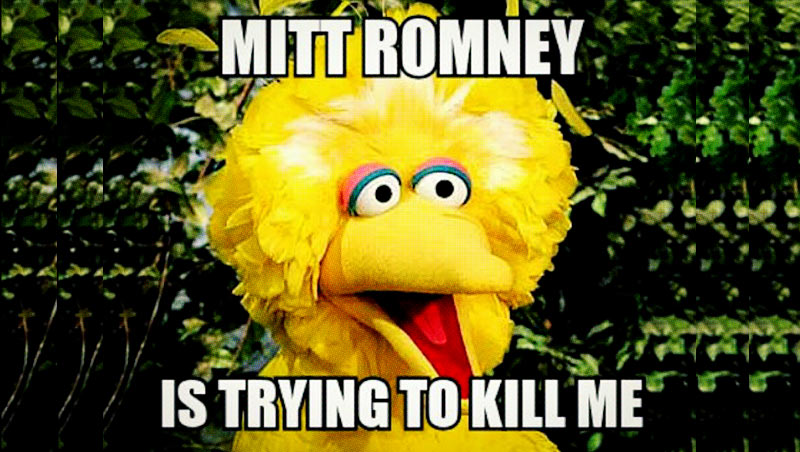 The meme that broke after the first presidential debate.

Don’t get me wrong, Citizens United was a dreadful and deeply undemocratic decision. But it also might be the case that, as the Beatles put it, money can’t buy love.

When the dust settles around this seemingly endless presidential race—the most expensive campaign in world history—one question to address will be how the various media may have affected the outcome of the election. In other words: Was it worth it?

In one corner we have Sheldon Adelson, the Koch brothers, Karl Rove, and their millions spent primarily on negative advertising against Democrats. Joining them are a concerted Republican-led effort at voter suppression and a Republican candidate a lot of people really don’t like one bit. In the other corner we have the instantly viral Mother Jones “47 percent” video, Sarah Silverman’s audacious and hilarious challenge to Adelson (also gone viral, check it out if you haven’t), and millions of Facebook users sharing anti-Romney and pro-Obama posts.

When the 5-4 ruling in Citizens United came down in 2010 from a deeply divided court (Justice Stevens’ dissent was 90 pages of rage at the decision), progressives were rightly alarmed by the implications. By overturning McCain-Feingold—the ruling deemed corporations (and unions) the equivalent of individuals and granted them under the auspices of “free speech” unlimited, anonymous spending—the court opened the floodgates to elections awash in money from sources other than the campaigns themselves. Because corporations have much more money than unions, and because billionaires are typically (though not always, of course) conservative, we feared, correctly, that right-wing groups would dominate the airwaves and attack Democratic candidates with endless negative advertising.

Even worse, Citizens United led to the metastasizing of “social welfare” groups, also known as 501(c)4s, like Karl Rove’s Crossroads GPS. These groups do not have to reveal who their contributors are and can raise and spend however much they want; within two years of its founding, Crossroads GPS brought in $77 million, 90 percent of it from only 24 donors. This lack of transparency has been hugely alarming to progressives. But the question after the election will be: Were we more worried than we needed to be?

Don’t get me wrong, Citizens United was a dreadful and deeply undemocratic decision. But it also might be the case that, as the Beatles put it, money can’t buy love.

As of this writing, the Mother Jones video appears to have done considerable damage to Romney, and possibly to downticket Republicans, who have distanced themselves from him and his truly cynical and chilling remarks. No big media buys here: Just put it out there and watch Facebook work its magic.

At the same time, “Restore Our Future,” the pro-Romney Super PAC, had spent $85 million by the end of September on anti-Obama ads.

One of the biggest spenders was Rove’s Crossroads GPS, which targeted Democratic Senate candidates like Claire McCaskill in Missouri, Tim Kaine in Virginia, Tammy Baldwin in Wisconsin and Sherrod Brown in Ohio. With Baldwin pulling ahead of Tommy Thompson in the polls in the wake of the 47 percent video, Crossroads made a $1.2 million dollar ad buy in Wisconsin to smear her for her “extreme tax-and-spend agenda” and for supporting the “failed” stimulus package—which, of course, saved the economy from total disaster. Will such attacks work in Senate and Congressional races?

The gap in battleground states between the amount spent by right-wing Super PACs, 501(c)4s and others, and the poll results that show Obama leading by 8-to-10 points, raises the question of whether unlimited spending on attack ads works in our media-saturated culture. In Michigan and Pennsylvania, Super PACs have spent at least $18 million to support Romney, but Obama leads him by wide margins as of now in both states. People get sick of those ads and tune them out, minimizing their effectiveness.

And after the election, will the IRS and the FEC aggressively investigate 501(c)4s for violating the terms of their tax status? As “social welfare” groups, only an “insubstantial amount” of their funds can be spent on political activities.

So now we wait. Turnout is everything in this race. But whether a grainy, amateur video, zooming through social media at the speed of light, trumps big money’s slickly produced television ads—that’s the question of the year.