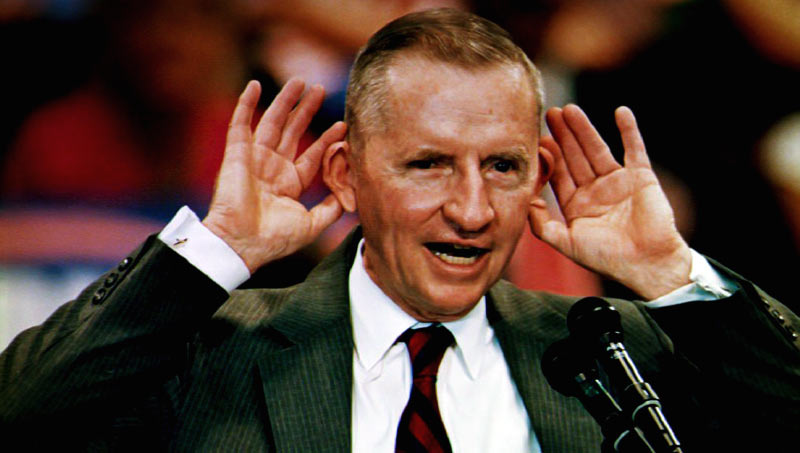 Can you hear me now? Perot’s warnings about NAFTA turned out to be prophetic. (Photo via Getty Images)

While Romney and Obama speechify, behind the scenes they continue to push policies that favor corporate profits over middle-class workers.

Obama’s avoid-the-disaster-of-a-Romney-presidency message may get him re-elected; it’s just not as inspiring as his hope-and-change message of 2008.

Presidential contenders Barack Obama and Mitt Romney have been spending a lot of time in Ohio, promising the swing-state voters they’ll bring back middle-class manufacturing jobs by getting tough on China. Obama says he’ll continue to haul China before the World Trade Organization for unfair export subsidies, while Romney wants to officially label the country a “currency manipulator.”

Both candidates recognize that a healthy middle class—workers with high-wage jobs who can afford to support a family, buy a home or a car, take a vacation, etc.—brought us out of the Great Depression and fueled a half-century of economic growth. The federal government, with programs such as the G.I. Bill, was once a true champion for the American middle class.

But as manufacturing plants have closed over the last three decades, millions of middle-class Americans have lost their well-paying jobs—along with their homes—and have fallen into poverty. Both Republicans and Democrats bear responsibility for this catastrophe through their support of tax and trade policies that encourage corporations to increase profits by outsourcing middle-class jobs to low-wage countries.

These policies were not inevitable. Other countries, such as Germany, support their workers and have managed to maintain a middle class. Nor were the consequences of these policies and the demise of the middle class unforeseeable—remember Ross Perot’s warning about the “giant sucking sound” we would hear as our jobs moved south after the passage of NAFTA?

Yet while the two candidates speechify, behind the scenes they continue to push policies that favor corporate profits over middle-class workers. For example, both candidates strongly support the proposed Trans-Pacific Partnership agreement (TPP), which is sold as a “free trade” agreement for the Pacific Rim and is being pushed by the U.S. Chamber of Commerce, the top lobbying group for American corporations.

The terms of the TPP have been kept secret from the public for two years and only made available to the negotiators and a select group of corporate partners. However, a draft of the agreement that was leaked in June reveals the TPP would bestow radical new powers upon multinational corporations, including one provision that would protect the pharmaceutical industry from generic competitors and others that would allow companies to override domestic protections for the environment and for workers. New TPP investment rules aim to eliminate “Buy American” preferences for U.S. manufacturers.

Obama’s support for these secret corporate-friendly policies directly contradicts the Democratic platform he ran on in 2008, just as it contradicts his 2012 campaign rhetoric about fighting for the middle class.

To add insult to injury, American taxpayers, including the downwardly mobile middle class, have been forced to finance the bailouts of corporations that were unable to maintain profitability in the economy they helped sink. Every year, the federal government borrows and spends about $1 trillion that the American people are obligated to repay with interest. That works out to new personal debt of about $3,000 per year for each of us 300 million Americans.

While deficit spending may sometimes be necessary to stimulate a bad economy, it must be directed at fixing actual problems rather than protecting the powerful. Misdirected deficit spending only digs us deeper in the hole.

Most of that $3,000 per year is not being used to support new industries, new schools, our crumbling infrastructure or our great cities. Rather, the money is being used to prop up the corporations that own our government—including a war industry that is making us less safe and a financial services industry swindling us out of our homes and our savings.

So why then should we elect Obama to a second term? Because the policies of his opponent appear to be even worse for what’s left of the American middle class. Obama’s avoid-the-disaster-of-a-Romney-presidency message may get him re-elected; it’s just not as inspiring as his hope-and-change message of 2008.

Oh, for a real choice in November.