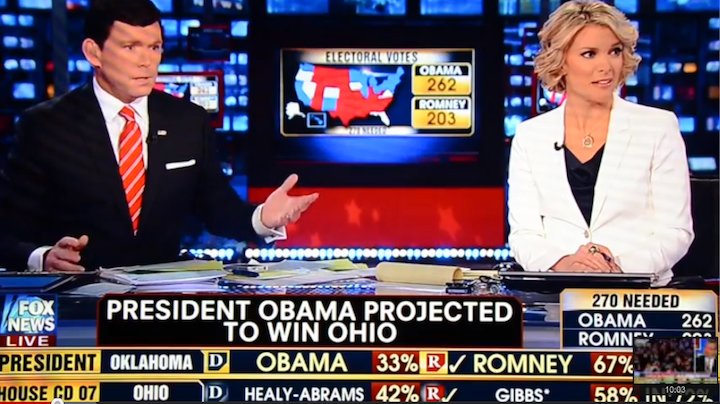 The GOP’s Year of Magical Thinking

Now that the election charade is over, will the party accept reality?

The conservative media, which has largely been predicting a Romney victory for months, was shocked by Tuesday's results.

If you were a conservative listening to and reading primarily conservative media, the presidential race was never, in truth, very close. Romney would win—and probably win big—all along.

No wonder that Sarah Palin, speaking on behalf of conservatives, expressed disbelief at the results last night. “It's a perplexing time for many of us right now,” she said.

Indeed. What follows is a sampling of commentary on the presidential race from conservative pundits. The majority of the items were among the most-read pieces on the conservative-leaning RealClearPolitics website, so they hardly represent fringe thinking. In fact, they were the Right’s mainstream thinking about the election. And that thinking was firmly and consistently at odds with the empirical evidence also available at the RCP site.

Though Mitt Romney did pull ahead of President Obama in RCP’s popular-vote polling average in the wake of the first debate, he trailed Obama for most of the race (often by a wide margin), and Obama regained the lead in the final week. Romney led narrowly in RCP’s electoral-vote count for just one week, in mid-to-late October. But Obama led him at the race’s conclusion.

In other words, conservative pundits looked at polls showing a comfortable lead for Obama through much of the race—and a narrow but consistent lead for him at the end—and saw not just a guaranteed Romney victory but, in some notable cases, an imminent landslide.

Why does the Right's over-optimism matter?

The 2012 election was a referendum on two very different approaches to public policy. One approach is to use the best available empirical evidence. The other is to rely on faith and wishful thinking. As in their campaign coverage, conservatives consistently opt for the latter route—a choice that has often blinded them to the reality in front of their noses. Climate change and the failure of supply-side economics are the most obvious examples.

They’re no less wrong about those than they were about the election. And moving forward, one of the great questions facing the body politic is whether conservatism is capable of learning to accept actual evidence rather than relying on faith. Mercifully, there was a mechanism for settling the debate in the case of the election. But things are rarely so cut-and-dried in the realm of policy, where politicians and pundits can go on spinning their own realities for years and decades.

Here was the arc of the parallel universe that conservatives created during this year’s presidential election:

August-September 15: Obama is in over his head

This country was founded upon Judeo-Christian values of free speech and freedom of religion. A tea party revolution launched the Revolutionary War and Americans in the colonies stood up against tyranny and those who attempted to change our beliefs. Obama’s European socialism and his high taxes, high unemployment, high gasoline prices and huge debt are being rejected at each turn. Americans are mad as hell and they are not going to take it anymore! We see, “Romney in a landslide!”(August 4, Editorial Board, U-T San Diego, “Romney in a Landslide”)

8.2% unemployment (actually around 11% if the hopeless are factored in.) Looming tax hikes that will further destroy growth and the rollout of Obamacare that will lead to premium shock and reduced care and downward pressure on growth and unemployment. Iran thrusting for nukes and Israel pointing to the ticking clock. Cairo and other Arab cities burning and mobs massing. China launching new ships and initiatives; Russia hostile and grasping; Europe teetering. This is why Mitt Romney will win: Voters see and know this. Whether pollsters are doing their job or not on “likely voter screens” and “turnout models” doesn't change the facts on the ground. The president has failed, on every front and in spectacular fashion. (September 13, Hugh Hewitt, Hewitt Blog, “President Chauncey Gardiner, the Press and the Collapse”)

The function of the conventions is to formulate and articulate each party's view of the world. The fact that they were so similar and that each was willing to trust its fate to the question of, “Are you better off?” means that the Romney message will have a very strong advantage. The decision of the Democrats to embrace this choice and not to move to the center will make it impossible for them either to re-elect their president or to command a majority in the new Senate. (Sept. 14, Dick Morris, RealClearPolitics, “Why Romney Will Win”)

September 15-30: The polling is corrupt

Democrats and their sharky Obamedia defense lawyers are in a snit. For three dreamy convention days in Charlotte, they told themselves that, for the first time in decades, it was their guy who had the upper hand when it came to national security. Now that bubble has burst, the way contrived narratives do when they crash into concrete challenges. At that point, an airy president of the world won’t do; we need to have a president of the United States, a job that has never suited, and has never been of much interest to, Barack Obama. (Sept. 15, Andy McCarthy, National Review, “Obama Vs. the First Amendment”)

How corrupt are all these polls showing Obama leading or in a “close race”? Are they to Obama what that California poll of the Washington Post was for Walter Mondale—an “in-kind contribution”? … How does one explain a president who, like Jimmy Carter in 1980, is increasingly seen as a disaster in both economic and foreign policy? How does a President Obama, with a Gallup job approval rating currently at 49% – down a full 20% from 2009 – mysteriously win the day in all these polls? How does this happen? Can you say “in-kind contribution”? (Sept. 25, Jeffrey Lord, American Spectator, “How Carter Beat Reagan”)

If you're going to believe the polls released from CBS/New York Times this morning—you know, the polls the media's currently using to beat Romney senseless and to depress Republican enthusiasm, you have to believe that the turnout advantage for Democrats over Republicans will blow away every previous record and common sense. (Sept. 26, John Nolte, Breitbart.com, “Juiced: Pro-Obama Polls Rely on Record Dem Turnout”)

October: Democrats are in denial and should be very, very worried

At a dinner party in London Saturday, I was asked to say a few words about the upcoming presidential election in the United States. All of the guests were what my friend Otto Penzler calls “politically mature,” i.e., they regarded Barack Obama with varying degrees of fear, loathing, and distaste. But they had also, most of them, imbibed deeply of The Narrative: the fairy tale dispensed by virtually all the legacy (formerly known as “the mainstream”) media that Obama was as sure a thing to win as was possible to discover in this mutable sublunary world. There was some surprise (not to say incredulity), then, when I repeated my frequent refrain (like a broken record) that I thought Mitt Romney would not only win but win big. (Oct. 1, Roger Kimball, pjmedia.com, “The Narrative in London”)

Some Democrats are apparently not waiting for Barack Obama to lose the presidential election before starting the inevitable recriminations about whose fault it was. Whether writing strictly on his own hook or as a result of conversations with campaign officials, New York Times political writer Matt Bai has fired the first shot in what may turn out to be a very nasty battle over who deserves the lion’s share of the blame for what may turn out to be a November disaster for the Democrats.  (Oct. 24, Jonathan S. Tobin, Commentary, “Dems Begin the Post-Obama Blame Game”)

Barack Obama is toast. This is not something I say lightly. I generally try to remain cautious about predictions, because the prediction business is a humbling one. I have never been especially bullish on Mitt Romney, and I spent most of the summer and early fall arguing that this was basically a neck-and-neck race that would go down to the wire. But in the end, two things stand out: One, Mitt Romney has a consistent, significant lead among independent voters, which increasingly looks like a double-digit lead. … Two, to overcome losing independents by more than a few points, Obama needs to have a decisive advantage in Democratic turnout, roughly on the order of—or in some places exceeding—the advantage he enjoyed in 2008, when Democrats nationally had a 7-point advantage (39-32). Yet nearly every indicator we have of turnout suggests that, relative to Republicans, the Democrats are behind where they were in 2008. (Oct. 26, Dan McLaughlin, Red State, “Why I Think Obama Is Toast”)

If you’ve been watching the polls and the campaigns at all objectively, you’re starting to see a picture develop. One where Romney’s the winner well before bedtime. I believe we’re on the verge of a solid Romney win for two reasons. One is the objective evidence. The other is the ugly desperation of the Obama campaign in its final days. (Oct. 31, Michael Graham, Boston Herald, “Mitt Romney Set to Win, Maybe By a Mile”)

[M]y thoughts, my intellectual analysis of this—factoring everything I see plus the polling data—it's not even close. Three hundred-plus electoral votes for Romney. (Nov. 5, Rush Limbaugh, RushLimbaugh.com, “Everything—Except the Polls—Points to a Romney Landslide”)

Who knows what to make of the weighting of the polls and the assumptions as to who will vote? Who knows the depth and breadth of each party’s turnout efforts? Among the wisest words spoken this cycle were by John Dickerson of CBS News and Slate, who said, in a conversation the night before the last presidential debate, that he thought maybe the American people were quietly cooking something up, something we don’t know about. I think they are and I think it’s this: a Romney win. (Nov. 5, Peggy Noonan, Wall Street Journal, “Monday Morning”)

It's likely, of course, that some of this was bluffing, with the hope of creating a new reality by denying the actual one. If so, many of the Republicans listening were snookered. The conservative writer Byron York reported from Romney’s Boston headquarters that “the campaign’s supporters and volunteers fully expected Romney to be the nation’s next president. Indeed, what was striking after Fox News called the race for Obama, at about 11:15 p.m., was how stunned so many of Romney’s supporters were.”

Well, no kidding. Why would they have prepared for anything other than a victory celebration?

In early September, conservative talk-radio star Rush Limbaugh predicted that a Romney defeat would mean the end of the GOP and the rise of a conservative third-party challenger. That’s debatable. But it’s clear that the party will have to reform itself in some fundamental ways. Facing up to reality might be a good start.