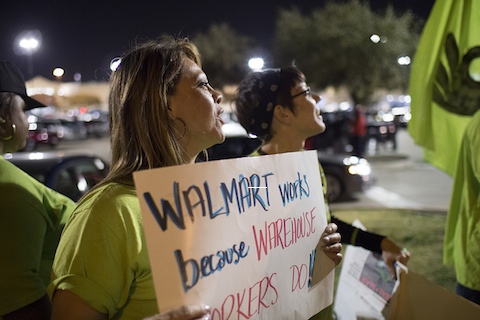 The retail giant’s low wages and poor working conditions drive down standards throughout a burgeoning sector.

Even with $16 billion in profits last year, Walmart pays such low wages that in most states, it has the largest number of employees reliant on government assistance of any company. This costs American taxpayers hundreds of millions of dollars per year.

On Black Friday, workers and their community allies protested for “consistent hours, better pay, and simple respect” at Walmart, the country's largest private-sector employer with 1.4 million employees. Even with $16 billion in profits last year, Walmart pays such low wages that in most states, it has the largest number of employees reliant on government assistance of any company. This costs American taxpayers hundreds of millions of dollars per year.

The workers are demanding that Walmart provide a wage of at least $13 per hour, affordable benefits and more full-time positions, and that the mega-retailer stop retaliating against employees who speak up at the workplace. Despite what the company claims about paying competitive wages, the reality is that almost half of Walmart's associates make less than $10 an hour. According to an IBISWorld report, the average Walmart employee make just $8.81 per hour. One third of the company’s employees are denied benefits because Walmart scheduling keeps them on fewer than 28 hours per week, even though many of them want full-time positions. Walmart stresses that the majority of its store-level managers start off as hourly employees, but in reality precious few of its 1.4 million associates will ever make it to the ranks of management.

Walmart jobs are now cultural shorthand for low-wage, dead-end positions with poor benefits and few opportunities for advancement. Jobs at warehouses around the country that are contracted by Walmart are no better–which is why Walmart warehouse workers in California's Inland Empire and Elwood, Illinois have launched recent strikes.

The plight of Walmart’s 1.4 million associates directly affects growing numbers of American workers. The retail sector is now more important than ever before to the U.S. economy. Fifteen million Americans work in retail, most earning about $21,000 per year. Unionized jobs in the sector enjoy better wages and benefits, but only 5.4 percent of the sector is now unionized nationwide, and the “union wage premium” has fallen significantly in recent years as a result of the pressures of non-union competition. The “Walmart effect” looms large over the retail sector. The Bentonville-based giant has driven several unionized retailers out of business and forced many others to drive down wages and benefits.

Instead of lowering the bar, Walmart could set a higher standard for the retail industry. According to a recent study by the think tank Demos, even a modest wage increase for Walmart and other low-wage retail employers would lift more than 700,000 Americans out of poverty and raise another 750,000 farther from the poverty line. By boosting the spending power of low-income Americans, moreover, it would grow the economy and create 100,000 new jobs. And it would not significantly hurt Walmart’s enormous profits nor prevent it from offering low prices to consumers. Other retailers, including Costco Wholesale Corp. and Trader Joe’s, already provide workers with decent wages, affordable health and retirement benefits and more full-time jobs, yet are still highly profitable companies. Costco, for example, provides its employees with better training and career opportunities, and in return enjoys the benefits of lower turnover and higher productivity per employee.

For decades, Walmart has intimidated employees who try to speak up against low wages and poor conditions. The situation is even worse when it comes to Walmart’s supply chain workers. A 2012 apparel industry survey by the human rights organization Not for Sale ranked it equal last out of 50 major companies when it comes to respect for workers’ rights. This violation of fundamental rights makes more likely incidents such as last week’s horrific fire in Bangladesh at a factory that manufactured clothes for Walmart.

If this dire situation is to improve, Walmart workers will need help from the Obama administration. President Obama cannot force Walmart to respect its workers, but he could use his bully pulpit to support their cause. In 2007, then-Senator Obama stated: “I don’t mind standing up for workers and letting Walmart know they need to pay a decent wage and let folks organize.” The President should again encourage the nation’s largest employer to raise standards in the retail sector, not lower them, and to respect its workers’ rights.