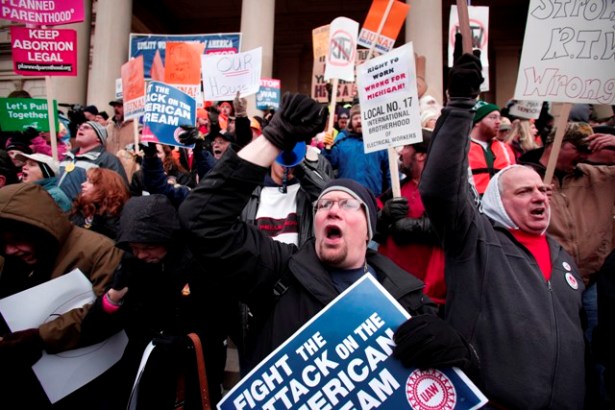 Right-to-Work in Michigan Is About Politics, Not Economics

Michigan’s anti-union legislation will hurt the state’s economy, not help it as Republicans claim.

Either through willful ignorance or deliberate misrepresentation, Snyder is professing to give employees a right that they already enjoy.

Today, Michigan became the nation’s 24th state, and the most unionized state, to enact right-to-work legislation prohibiting employers and unions from negotiating union security agreements. In protest, thousands of union members and their allies converged at the state Capitol in Lansing this morning.

Michigan Republicans have done their utmost to make sure there has been no opportunity to discuss the merits of the legislation and no opportunity for voters to learn about the true impact of right-to-work. They have rushed right-to-work through the legislature in record time, overriding the attempts of Democrats to have the legislation voted on in conference committee. Late last week, the controversial measure went from floor introduction to passage in 90 minutes, with no hearings and no testimony. After watching Ohio’s anti-collective bargaining legislation overturned by a large majority in a special election last year, Republicans have taken measures to ensure that Michigan’s voters cannot overturn right-to-work. The inclusion of an appropriations provision means that right-to-work can only be replaced by new legislation, and the redrawing of boundaries by Republicans after the 2010 elections will make it difficult for Democrats to win the seats necessary to achieve this.

Michigan’s Republican governor, Rick Snyder, meanwhile, has had a dramatic change of heart on the merits of right-to-work. Prior to the election, the Governor stated repeatedly that he considered right-to-work as too divisive an issue. It was “not on his agenda” and he did not want to see a bill on his desk. Instead, he wanted to focus on what matters most to Michiganders—job creation. But now Snyder has enthusiastically endorsed the legislation, appearing to believe that Michigan can compete domestically and internationally on the basis of low wages and poor labor standards.

After meeting with the Governor on Monday to express their opposition, Michigan’s congressional Democrats stated that Snyder appeared not to understand current law. In Michigan, as in the rest of the United States, no one can be forced to join a union as a condition of employment. Under federal law, neither the union nor the employer can require an employee to join the union in either the public or private sectors. Workers represented by unions always have the option of becoming agency fee payers, contributing a fee that covers only the cost of representing the employee in the bargaining unit. Yet Snyder insists on stating that right-to-work laws give workers the “ultimate choice” on whether or not they join a union. Either through willful ignorance or deliberate misrepresentation, Snyder is professing to give employees a right that they already enjoy.

In fact, right-to-work laws simply outlaw agreements that provide for agency fees from non-members, thereby making it much more difficult for unions to maintain stable organizations. Unions are still required by law to negotiate on behalf of all the workers in the bargaining unit, even though under right-to-work, non-members don't pay for the representation they receive.

Right-to-work legislation would be a disaster for workers in Michigan. But even worse for American workers is the prospect of Republican lawmakers in the neighboring states of Ohio and Pennsylvania taking advantage of the situation—arguing that because Indiana and Michigan have passed right-to-work, they will be at a competitive disadvantage unless they follow suit—to launch their own ideological attacks on unions.

On a visit to a factory that is creating more union jobs, President Obama stated in Michigan on Monday, “These so-called ‘right-to-work' laws, they don't have to do with economics; they have everything to do with politics.” This gets to the heart of the issue. Right-to-work won’t help Michigan’s economy or its workers, but it will lower wages and worsen labor standards. And it will damage the principal organizations in Michigan that give a political voice to workers, instead of to billionaires, and that, of course, is its true purpose.

Update: This piece has been updated to reflect that Gov. Rick Snyfer signed the legislation soon after the House voted it through.