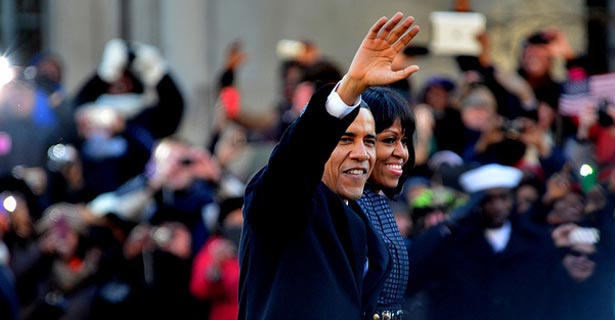 Two days before the presidential inauguration, progressives met to strategize and lay out their own goals for the next four years. Glyn Lowe / Flickr / Creative Commons

Progressive Democrats: Inside and Outside

Activists and progressive Democrats met this week to set their agenda for the next four years.

"For the Progressive Caucus and our 70-odd members, holding the line can be huge leverage in this discussion. I’m optimistic about the role we can play. This is where the outside-inside [strategy] is so critical, because the pressure from the outside, not just on progressive members of Congress but on all members of Congress, is going to be critical to holding the line."

On January 19 in Washington, D.C., Progressive Democrats of America (PDA) gathered with left-leaning members of Congress and social movement leaders to lay out the organization’s agenda for the next four years.

PDA, whose allies in Congress come from the activist wing of the 76-member Congressional Progressive Caucus, engages in what it calls an “inside-outside” strategy of connecting the demands of progressive social movements to legislative action from members of Congress. Saturday afternoon’s “Progressive Central,” the third such gathering in the group’s eight-year existence, embodied that “inside-outside” spirit, as PDA-backed members of Congress spoke on panels with activists from the labor, peace and environmental movements at the University of the District of Columbia’s law school. At other times during the conference, attendees mingled outside in a hall that featured tabling from groups like CODEPINK, Public Citizen and Democratic Socialists of America.

In the upcoming session of Congress, some PDA-backed Democrats plan to introduce pieces of legislation that enjoy widespread support among the American left—but will, in all likelihood, be met with stiff opposition in the 113th Congress. Rep. John Conyers (D-Mich.) said he would introduce a full employment act. Conyers will also again introduce a version of the so-called “Medicare-for-all” bill, which would create a single-payer universal healthcare system. Rep. Jim McGovern (D-Mass.) said he would introduce a constitutional amendment to affirm that corporations are not people, in addition to supporting a bill that would strengthen the Voting Rights Act. McGovern, like other PDA allies in Congress, also said that defense cuts would be a priority, telling the audience to rousing applause, “If I had my way, I would shut down every U.S. military base in the Middle East right now.” Moreover, Rep. Keith Ellison (D-Minn.) will introduce a bill, backed prominently by the National Nurses United union, to implement a tax on all financial transactions, the so-called Robin Hood tax.

Meanwhile, there are some other more modest liberal initiatives that might make some headway in a political context in a Washington that is largely hostile to sweeping progressive reforms.

A coalition made up of Communications Workers of America (CWA), Sierra Club, Greenpeace and the NAACP has been working together to push for filibuster reform in the Senate—changes in the legislative body’s rules that would make it easier for a simple majority to force floor debate and votes on bills. The current Senate rules allow the Republican minority to easily block debate on bills, which effectively means that a “filibuster-proof” majority of 60 votes is required in order to move forward on any legislation. The filibuster has blocked progressive legislative priorities in the past—notably the Employee Free Choice Act—and could hold up legislative action this time around on issues like gun control and immigration reform.

CWA Senior Director George Kohl told In These Times that though the full details of a new filibuster-reform proposal by Senate Majority Leader Harry Reid (D-Nev.) are not yet clear, the measure “doesn’t give us everything that we want.” The union has been advancing a proposal that would require the 41 senators engaging in a filibuster to remain on the floor and speak in order to sustain the filibuster. Nonetheless, the Senate has the constitutional authority to change its rules at the beginning of each legislative session by means of a simple majority, and Reid has indicated he intends to use that maneuver to limit the use of the filibuster in some cases like presidential nominations. Those rule changes could happen as early as Tuesday, when the new session of the Senate convenes.

Additionally, other activists see pressure on the executive branch as another possible means of achieving some liberal reforms at the federal level, particularly when it comes to environmental issues.

“We all know we have a recalcitrant Republican House. … If John Boehner and the Republican House won’t move, that doesn’t mean that the EPA can’t issue carbon regulations or methane regulations. That doesn’t mean the President and the State Department can’t stop the Keystone XL pipeline,” Steve Cobble, a co-founder of PDA and veteran of the Jesse Jackson and Dennis Kucinich presidential campaigns, told the audience. “Traditionally in this town, people think about the Congress. It might be strategic for us to take the little power we have and focus it on some of our agencies and administrative heads and key aides that work for important people in this town, and try to pressure them to do things that they’re allowed to do to the limit of their constitutional ability.”

Despite the many disappointments surrounding the administration’s environmental policy over the last four years, there may, in fact, be a limited window for progress on that front in Washington. President Obama addressed climate change in his inaugural address on Monday. And on February 17, Sierra Club, 350.org and the Hip Hop Caucus are holding what the groups are billing as the “largest climate rally in history” on the National Mall.

Nonetheless, the left will likely be in defense mode for much of the upcoming legislative session. Even though House Republicans have indicated that they will not be using the vote to raise the debt ceiling as a means of extracting deep spending cuts, there is a possibility that regressive spending cuts could be on the horizon soon, starting when the Senate takes up the process of preparing a budget this spring. Specifically, there has been talk around changing the formula that goes into calculating benefits for Social Security to what is called “chained CPI”—a move that effectively reduces future benefits, and a “compromise” that the President has indicated he supports.

Indeed, Rep. Raúl Grijalva (D-Ariz.), co-chair of the Progressive Caucus, told In These Times that he was worried his party leadership might agree to a future budget deal that could include cuts to Social Security.

“I’m concerned. I’m concerned,” Grijalva said. “But none of that’s going to pass without Democrats, so I think for the Progressive Caucus and our 70-odd members, holding the line can be huge leverage in this discussion. I’m optimistic about the role we can play. This is where the outside-inside [strategy] is so critical, because the pressure from the outside, not just on progressive members of Congress but on all members of Congress, is going to be critical to holding the line.”

Another major piece of legislation that could put progressives on the defensive is the Trans-Pacific Partnership (TPP), a global free trade agreement that has been described as “NAFTA on steroids.” The trade deal, which has largely been negotiated in secret, would create international tribunals overruling domestic laws, ban “buy America” procurements and substantially curtail Internet freedoms, among other things.

But as Lori Wallach, director of Public Citizen’s Global Trade Watch, pointed out, left-leaning opponents of TPP might be able to hold up the trade deal’s passage by aligning themselves with conservatives in Congress. A potential makeshift coalition of liberal Democrats and Republicans could unite to block the TPP, just as a similar coalition helped put a stop to the Stop Online Piracy Act (SOPA).

“From a conservative perspective, also 100 percent accurate, just a different frame, this is about an international governance regime that undermines U.S. sovereignty and solvency,” Wallach said.

While the political context—a Republican majority in the House and a President that are far from sympathetic to many of PDA’s core demands—might not be ideal for major liberal reforms at the federal level, the organization and its allies are hoping that a mix of grassroots opposition in the streets and pressure in Congress can keep its agenda on the table for the time being.

“I’m a Saul Alinsky guy, you know, that’s where I learned this stuff,” Grijalva told In These Times. “There’s gotta be some victories regardless of how small they are. Sometimes the victory with this group is going to be keeping the worst from happening.”