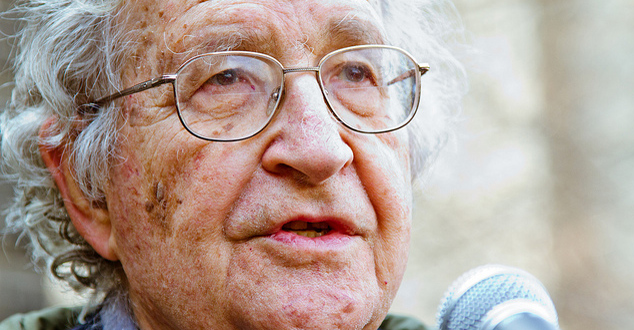 Who Owns The World?

In a new book, Noam Chomsky and David Barsamian deconstruct the notion of a declining United States.

If you study international relations theory, there's what's called the 'realist' school, which says there is an anarchic world of states, and those states pursue their 'national interest.' It's in large part mythology. There are a few common interests, like survival. But, for the most part, people within a nation have very different interests. The interests of the CEO of General Electric and the janitor who cleans his floor are not the same.

Excerpted from Power Systems: Conversations on Global Democratic Uprisings and the New Challenges to U.S. Empire, is a collection of recent conversations between Noam Chomsky and David Barsamian, director of Alternative Radio.

David Barsamian: The new American imperialism seems to be substantially different from the older variety in that the United States is a declining economic power and is therefore seeing its political power and influence wane.

Noam Chomsky: I think talk about American decline should be taken with a grain of salt.

World War II is when the United States really became a global power. It had been the biggest economy in the world by far for long before the war, but it was a regional power in a way. It controlled the Western Hemisphere and had made some forays into the Pacific. But the British were the world power.

World War II changed that. The United States became the dominant world power. The U.S. had half the world's wealth. The other industrial societies were weakened or destroyed. The U.S. was in an incredible position of security. It controlled the hemisphere, and both the Atlantic and the Pacific, with a huge military force.

Of course, that declined. Europe and Japan recovered, and decolonization took place. By 1970, the U.S. was down, if you want to call it that, to about 25 percent of the world's wealth – roughly what it had been, say, in the 1920s. It remained the overwhelming global power, but not like it had been in 1950. Since 1970, it's been pretty stable, though of course there were changes.

Within the last decade, for the first time in 500 years, since the Spanish and Portuguese conquest, Latin America has begun to deal with some of its problems. It's begun to integrate. The countries were very separated from one another. Each one was oriented separately toward the West, first Europe and then the U.S.

That integration is important. It means that it's not so easy to pick off the countries one by one. Latin American nations can unify in defense against an outside force.

The other development, which is more significant and much more difficult, is that the countries of Latin America are individually beginning to face their massive internal problems. With its resources, Latin America ought to be a rich continent, South America particularly.

Latin America has a huge amount of wealth, but it is very highly concentrated in a small, usually Europeanized, often white elite, and exists alongside massive poverty and misery. There are some attempts to begin to deal with that, which is important – another form of integration – and Latin America is somewhat separating itself from U.S. control.

There's a lot of talk about a global shift of power: India and China are going to become the new great powers, the wealthiest powers. Again, one should be pretty reserved about that.

For example, many observers comment about U.S. debt and the fact that China holds so much of it. A few years ago, actually, Japan held most of the U.S. debt, now surpassed by China.

Furthermore, the whole framework for the discussion of U.S. decline is misleading. We're taught to talk about a world of states conceived as unified, coherent entities.

If you study international relations theory, there's what's called the “realist” school, which says there is an anarchic world of states, and those states pursue their “national interest.” It's in large part mythology. There are a few common interests, like survival. But, for the most part, people within a nation have very different interests. The interests of the CEO of General Electric and the janitor who cleans his floor are not the same.

Part of the doctrinal system in the United States is the pretense that we're all a happy family, there are no class divisions, and everybody is working together in harmony. But that's radically false.

In the 18th century, Adam Smith said that the people who own the society make policy: the “merchants and manufacturers.” Today power is in the hands of financial institutions and multinationals.

These institutions have an interest in Chinese development. So if you're, say, the CEO of Walmart or Dell or Hewlett-Packard, you're perfectly happy to have very cheap labor in China working under hideous conditions and with few environmental constraints. As long as China has what's called economic growth, that's fine.

The more advanced countries of the region – Japan, Singapore, South Korea and Taiwan – send advanced technology, parts and components to China, which uses its cheap labor force to assemble goods and send them out of the country.

And U.S. corporations do the same thing: They send parts and components to China, where people assemble and export the final products. These are called Chinese exports, but they're regional exports in many instances, and in other instances it's actually a case of the United States exporting to itself.

Once we break out of the framework of national states as unified entities with no internal divisions within them, we can see that there is a global shift of power, but it's from the global workforce to the owners of the world: transnational capital, global financial institutions.

Excerpted from Power Systems: Conversations on Global Democratic Uprisings and the New Challenges to U.S. Empire. Interviews with David Barsamian by Noam Chomsky. Published by Metropolitan Books, an imprint of Henry Holt and Company, LLC. c.2013 by Aviva Chomsky and David Barsamian. All rights reserved.