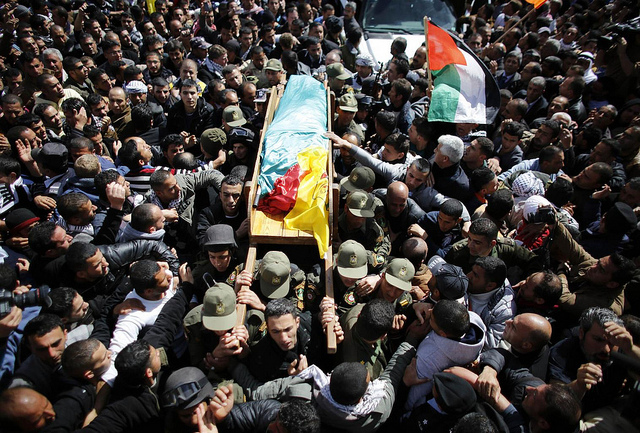 Thousands of protesters carry the casket of Arafat Jaradat, a Gazan who died in Israeli custody, during his funeral, February 2013, in Israel. (StopTheWallCampaign/Flickr/CreativeCommons)

In Gaza, Dignity Is the Battleground

Israel isn't Gaza's only adversary. Gaza's southern border remains largely under the control of Egypt's dreaded secret police, the Mukhabarat, which credible reports link closely to the CIA and the Israeli Mossad.

The Swedish novelist Henning Mankell tells of an experience in Mozambique during the civil war horrors there 25 years ago, when he saw a young man walking toward him in ragged clothes.

“I noticed something that I will never forget for as long as I live,” Mankell says. “I looked at his feet. He had no shoes. Instead he had painted shoes on his feet. He had used the colors in the ground and in the roots to replace his shoes. He had come up with a way to keep his dignity.”

Such scenes will evoke poignant memories among those who have witnessed cruelty and degradation, which are everywhere. One striking case, though only one of a great many, is Gaza, which I was able to visit for the first time last October.

There violence is met by the steady resistance of the samidin —those who endure, to borrow Raja Shehadeh's evocative term in The Third Way, his memoir on Palestinians under occupation, 30 years ago.

Greeting me on my return home were the reports of the Israeli assault on Gaza in November, supported by the United States and tolerated politely by Europe as usual.

Israel isn't Gaza's only adversary. Gaza's southern border remains largely under the control of Egypt's dreaded secret police, the Mukhabarat, which credible reports link closely to the CIA and the Israeli Mossad.

Just last month a young Gaza journalist sent me an article describing the Egyptian government's latest assault on the people of Gaza.

A network of tunnels into Egypt is a lifeline for Gazans imprisoned under harsh siege and constant attack. Now the Egyptian government has devised a new way to block the tunnels: flooding them with sewage.

Meanwhile the Israeli human rights group B'Tselem reports on a new device that the Israeli army is using to counter the weekly nonviolent protests against Israel's illegal Separation Wall—in reality an Annexation Wall.

The samidin have been ingenious in coping with tear gas so the army has escalated, spraying protesters and homes with jets of a liquid as noxious as raw sewage.

The tragedy of Gaza traces back to 1948, when hundreds of thousands of Palestinians fled in terror or were forcibly expelled to Gaza by conquering Israeli forces.

Prime Minister David Ben-Gurion held that “The Arabs of the Land of Israel have only one function left to them—to run away.”

It is noteworthy that today the strongest support for Israel in the international arena comes from the United States, Canada and Australia, the so-called Anglosphere—settler-colonial societies based on extermination or expulsion of indigenous populations in favor of a higher race, and where such behavior is considered natural and praiseworthy.

For decades Gaza has been a showcase for violence of every kind. The record includes such carefully planned atrocities as Operation Cast Lead in 2008-2009—“infanticide,” as it was called by Norwegian physicians Mads Gilbert and Erik Fosse, who worked at Gaza's al-Shifa Hospital with their Palestinian and Norwegian colleagues through the criminal assault. The word is apt, considering the hundreds of children massacred.

Violence ranges through just about every kind of cruelty that humans have used their higher mental faculties to devise, up to the pain of exile.

The pain is particularly stark in Gaza, where older people can still look across the border toward the homes from which they were driven—or could if they were able to approach the border without being killed.

One form of punishment has been to close off more of the Gazan side of the border, turning it into a buffer zone, including half of Gaza's arable land, according to Harvard's Sara Roy, a leading scholar on Gaza.

While a showcase for the human capacity for violence, Gaza is also an inspiring exemplar of the demand for dignity.

Ghada Ageel, a young woman who escaped from Gaza to Canada, writes about her 87-year-old refugee grandmother, still trapped in the Gaza prison. Before her grandmother's expulsion from a now-destroyed village, “she owned a house, farms and land and she enjoyed honor, dignity and hope.”

Amazingly, like Palestinians generally, the elderly woman hasn't given up hope.

“When I saw my grandmother in November 2012 she was unusually happy,” Ageel writes. “Surprised by her high spirits, I asked for an explanation. She looked me in the eye and, to my surprise, said that she was no longer worried about” her native village and the life of dignity that she has lost, for her irrevocably.

The village, her grandmother told Ageel, “is in your heart, and I also know that you are not alone in your journey. Don't be discouraged. We are getting there.”

The search for dignity is understood instinctively by those who hold the clubs, and who recognize that apart from violence, the best way to undermine dignity is by humiliation. That is second nature in prisons.

The normal practice in Israeli prisons is once again under scrutiny. In February, Arafat Jaradat, a 30-year-old gas-station attendant, died in Israeli custody. The circumstances might yet spark another uprising.

Jaradat was arrested in his home at midnight (an appropriate hour to intimidate his family), and charged with having thrown stones and a Molotov cocktail a few months earlier, during Israel's November attack on Gaza.

Jaradat, healthy when arrested, was last seen alive in court by his lawyer, who describes him as “doubled over, scared, confused and shrunken.”

The court remanded him to another 12 days of detention. Jaradat was found dead in his cell.
Journalist Amira Hass writes that “The Palestinians do not need an Israeli investigation. For them, Jaradat's death is much bigger than the tragedy he and his family have suffered. From their experience, Jaradat's death is a proof that the Israeli system routinely uses torture. From their experience, the goal of torture is not only to convict someone, but mainly to deter and subjugate an entire people.”

The means are humiliation, degradation and terror—familiar features of repression at home and abroad.

The need to humiliate those who raise their heads is an ineradicable element of the imperial mentality.

In the case of Israel-Palestine, there has long been a near-unanimous international consensus on a diplomatic settlement, blocked by the United States for 35 years, with tacit European acceptance.

Contempt for the worthless victims is no small part of the barrier to achieving a settlement with at least a modicum of justice and respect for human dignity and rights. It's not beyond imagination that the barrier can be overcome by dedicated work, as has been done elsewhere.

Unless the powerful are capable of learning to respect the dignity of the victims, impassable barriers will remain, and the world will be doomed to violence, cruelty and bitter suffering.