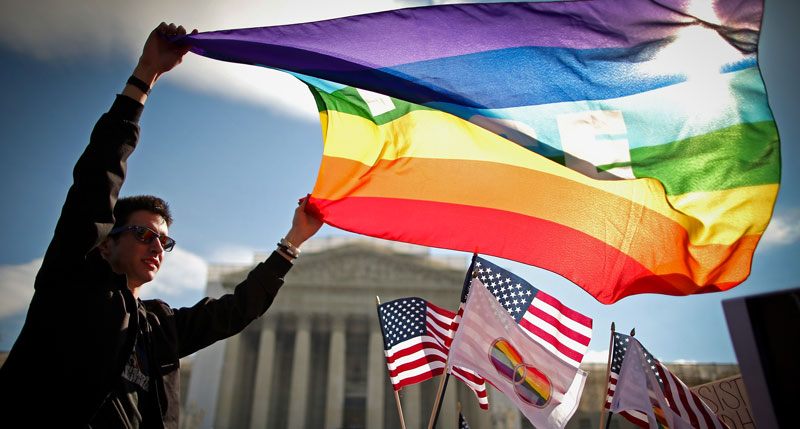 On March 27 in Washington, D.C., same-sex marriage supporters rally outside the Supreme Court as the Defense of Marriage Act case is heard.

Republicans are waving a white flag in their battle against marriage equality–or is that a rainbow flag?

Rove can read the tea leaves: If the GOP is going to go forward and grow, it’s got to start adjusting now to the reality that same-sex marriage has lost its power to outrage and move large numbers of people.

How far has same-sex marriage come this year?

Just consider that Karl Rove, the man who allegedly masterminded the 2004 Republican strategy to churn out anti-gay state referendums as a “wedge” to stoke evangelical turnout and propel George W. Bush to a second term, told ABC’s This Week on March 24 that he could see a 2016 GOP presidential candidate supporting same-sex marriage.

Sure, Rove is seemingly on the ropes—under attack by his own right-wing forces for not producing during the last election cycle—but this is the man who must have looked Vice President Dick Cheney in the eye (Cheney, who has an openly lesbian daughter and who has publicly supported same-sex marriage since long before 2004) and pretty much told him his daughter was collateral damage in their White House quest.

How big of a switcheroo is this? Well, just last summer the Republican party platform proclaimed: “We applaud the citizens of the majority of states which have enshrined in their constitutions the traditional concept of marriage, and we support the campaigns under way in several other states to do so.”

But suddenly this winter, Sen. Rob Portman (R-Ohio), who came within a breath of being Mitt Romney’s running mate, came out in support of same-sex marriage and seems to be suffering no consequences at all. That Portman’s reason is incredibly myopic and subjective—his son is gay—got lost on the larger GOP audience, for whom the personal nature of it made Portman somewhat of a sympathetic character.

But what may really have paved the way for Portman were the more than 100 Republicans who came out of the closet to support same-sex marriage in an amicus brief to the Supreme Court for the Prop 8 and Defense of Marriage Act cases. The signatories included Jon Huntsman, Romney’s presidential primary rival, and Beth Myers, who ran Romney’s 2008 campaign (with its anti-same-sex marriage agenda) and served as a senior adviser on the 2012 try (ditto). Even Meg Whitman, who supported Prop 8 as a GOP gubernatorial candidate in California, had come around.

Most of these signatories don’t hold an office currently, and in fact, just about everybody’s conversion occurred after leaving their post. Among the few exceptions is Rep. Ileana Ros-Lehtinen of Florida, one of the most powerful Republicans in the House. Like Portman, she has a queer offspring, but, almost singularly among her Republican brethren, Ros-Lehtinen actually votes pro-gay: She’s a sponsor for repealing DOMA (though she voted for it in 1996), sponsored the repeal of Don’t Ask Don’t Tell, supports anti-hate crime and anti-discrimination laws and has asked the IRS for guidance for same-sex families. Yes, she represents South Beach and part of the Florida Keys, but she also reps a solidly Republican district heavy with Cuban-Americans and pro-Israel Jews where no one seems overly concerned about her views on LGBTQ issues.

In other words, the amicus brief and Republicans like Ros-Lehtinen helped cushion Portman—as did the GOP’s Growth and Opportunity Report, an autopsy on the 2012 campaign commissioned by Reince Priebus, the Republican National Committee chair. The report doesn’t actually mention queer politics, but it does call for respecting differing opinions.

Rove’s comments, though, are probably based on more concrete info, such as surveys showing that more than 80 percent of Americans under 30 support same-sex marriage. Even more tellingly, surveys by Pew show support for same-sex marriage is growing among the GOP’s most hardcore supporters. Approval among white evangelicals—the people Rove depended on the most for his nefarious anti-gay campaigns—has jumped from 13 to 24 percent since 2001.

Okay, that’s still pretty meager. But consider this: The Washington-based Public Religion Research Institute found that among evangelicals under 35, support is at 51 percent. And at least one other survey puts it as high as 64 percent.

Rove can read the tea leaves: If the GOP is going to go forward and grow, it’s got to start adjusting now to the reality that same-sex marriage has lost its power to outrage and move large numbers of people. Even those in opposition, like Rush Limbaugh, now declare it “inevitable.”

The ambitious Ohio senator has figured this out, too.