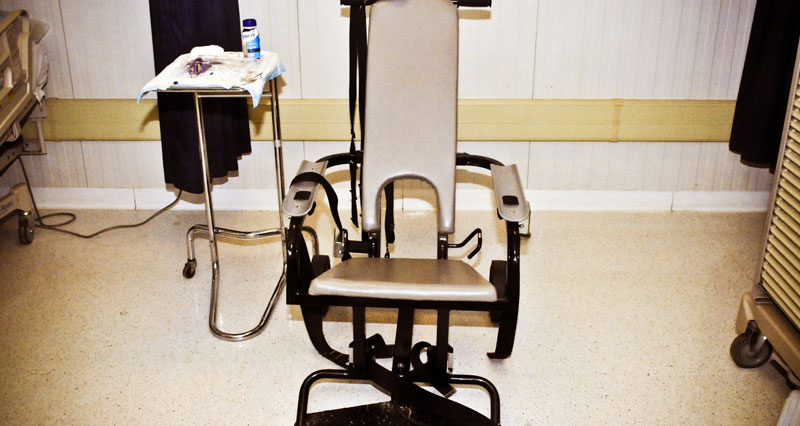 Starving for Justice at Gitmo

Is force-feeding a form of torture?

Many detainees have endured more than a decade without habeas corpus or trial in conditions condemned by the Red Cross.

“I am known only as 239 here,” wrote Shaker Aamer from his cell in Guantánamo. He is one of 166 prisoners trapped between a perpetual “war on terrorism” and a political/judicial system crippled by moral cowardice and jingoism. Captured 11 years ago, Aamer was cleared for release in 2007, but release never came.

Despair and anger have driven Aamer and more than 100 detainees to join a hunger strike that began February 6.

“They believe they are never going to get out,” says Robert Gensburg, a U.S. lawyer representing a Gitmo prisoner. “They have no hope, no hope for anything worthwhile.”

By June 3, U.S. military personnel were force-feeding 37 prisoners, strapping them in a chair the manufacturer calls “a padded cell on wheels.”

“A mask is placed over the detainee’s mouth to prevent spitting and biting,” according to Standard Operating Procedure (SOP): JTF-JMG 001, an Army document obtained by Al Jazeera.

Soldiers then push a tube through the prisoner’s nose into his stomach, confirm placement with a chest X-ray or an air-water mix, and pump in nutrients. Between feeds, strikers often remain in solitary confinement, which the SOP says is “vital to prevent them from achieving solidarity.”

Many detainees have endured more than a decade without habeas corpus or trial in conditions condemned by the Red Cross. Some 86 have been cleared but not released because of political and diplomatic obstacles; another 46 cannot be tried because evidence is lacking or was “coerced.”

“If anyone believes that I have done anything wrong,” wrote prisoner Musa’ab Omar Al Madhwani,“I beg them to charge me with a crime, try me and sentence me. If not, release me. … Indefinite detention is the worst form of torture.”

But it is not the only torture at Guantanamo.

The force feeding can take two hours and is repeated twice a day. “It can be extremely painful,” attorney David Remes told Reuters. “One of my clients said that it’s like having a razor blade go down through your nose and into your throat.” If the prisoner struggles, a guard may “hold the detainee’s head in the midline position,” SOP: JTF- JMG 001 advises.

The U.N. Human Rights Office condemned force-feeding Gitmo strikers as a form of torture and breach of international law. The American Medical Association wrote in an April 25 letter to Defense Secretary Chuck Hagel that force-feeding is unethical and inhumane: “Every competent patient has the right to refuse medical intervention, including life-sustaining interventions.”

Force-feeding can have complications, such as exposing “patients” to medically unnecessary radiation from repeated X-rays or causing conditions that require various drugs, like the anti-nausea med Phenergan and the heartburn drug Reglan, both of which can have serious side effects.

The military defends force feeding as a humanitarian effort to “protect, preserve, and promote life.” But Gensburg dismisses that rationale. “They’ve had deaths, suicides, before [at Gitmo], and they created tremendous embarrassment. The suggestion that the administration cares about the people there and their lives is nonsense.”

Constrained by a memorandum of understanding he signed when he became Abdul Zahir’s lawyer, Gensburg has paused carefully before answering each question. But asked if Obama’s hands are tied, he doesn’t hesitate. “No. He is the Commander-in-Chief of the armed forces. There is so much he can do—persuasion, actions—but he is too weak a president to do either,” he says. “The system … is absolutely disgraceful,” he adds, “no one can say when it will change.” Least of all the prisoners. Heinous criminals and the tragically unlucky alike, they are denied the very constitutional and human rights Washington uses to justify its military adventures.

The hunger strike—their only weapon—relies on moral suasion against medical personnel willing to just follow orders that violate their ethical code, and against an administration lacking the courage to respect the Constitution, free the innocent, try those for whom evidence of guilt exists and shut down the facility.

“There are very few ways the prisoners can demonstrate they are human beings,” says Gensburg, “few ways they can say ‘I’m a human being. Look at what you are doing to me.’ ”