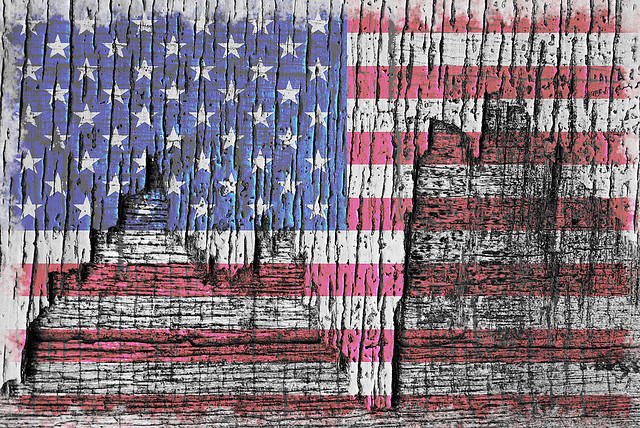 America is certainly exceptional, but that isn’t necessarily something to be proud of.

“American exceptionalism” is perhaps the most misunderstood phrase in politics. If, like the Merriam-Webster Dictionary, we define “exceptionalism” as “the condition of being different from the norm” - then it's certainly true that America is exceptional. But we rarely stop to ask: Should we always want to be exceptional?
The assumption in our culture is yes - but it's not always so clear-cut when you consider the key ways we are exceptional in comparison to other industrialized countries.
America, for instance, has an exceptional economy. GDP-wise, it is the largest in the world, making it the planet's most powerful engine of technological innovation and wealth creation. At the same time, the economy is exceptional for creating the industrialized world's most financially unequal society; producing one of the industrialized world's highest rates of childhood poverty; and mandating the industrialized world's least amount of off time (paid sick days, maternity leave, etc.).
In terms of health care, we have an exceptional system that stands out for spending more than any other nation's. According to the Cato Institute's Michael Tanner, that gets us a system that “is at the top of the charts when it comes to surviving cancer (and) drives much of the innovation and research on health care worldwide.”
Then again, America's health care system is also exceptional for being the only one in the industrialized world that doesn't guarantee health care to every citizen. Results-wise, that contributes to a society that, according to a recent National Academy of Sciences report, is far more unhealthy than 16 other developed nations.
“Americans have been dying at younger ages than people in almost all other high-income countries,” the report noted. “Not only are their lives shorter, but Americans also have a longstanding pattern of poorer health that is strikingly consistent and pervasive over the life course.”
In terms of freedom, even with the post-9/11 crackdown on civil liberties, America remains exceptional for how our laws safeguard free speech. But we are also exceptional for having the industrialized world's only president who asserts the right to execute citizens without due process. Similarly, we are exceptional in incarcerating more citizens than any other nation on Earth.
In terms of military might, America is exceptional for having the planet's most dominant fighting force. We are also exceptional for our spending - we devote more resources to military programs than the next 19 biggest-spending nations combined. And compared to the rest of the industrialized world, we are exceptional in the number of ongoing wars we prosecute; the amount of people we kill; and the amount of casualties we regularly incur.
So, again, in many ways America is indeed quite exceptional. But that's not always a positive thing, which raises the ultimate question: Is there a way to remain exceptional in ways that benefit us while also being a bit less exceptional in the ways that harm us and others?
Can, for instance, we have an exceptional economy without the exceptionally crushing inequality and poverty? Can we preserve the exceptional parts of our health care system, but also have a system that is less exceptional for how it denies access to all citizens and often delivers substandard health outcomes? Can we preserve exceptional freedoms while also being a less exceptional in our incarceration policies? And can we preserve an exceptionally effective military but be a little less exceptional in how much we spend on the Pentagon, how many wars we initiate, how many casualties we incur and how many people we kill?
The pessimistic answer to these questions is no. But the true sign of American exceptionalism is an America that starts saying yes.