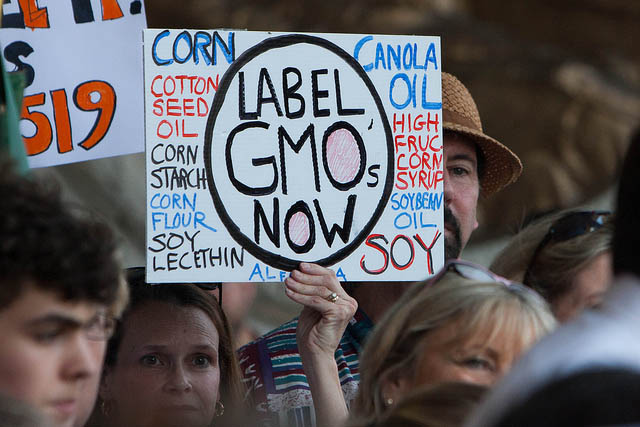 Four states to go, and a cascade of food labeling laws will take effect.

In June, legislators in Connecticut took a bite out of the secrecy surrounding genetically modified foods.

Connecticut is the first state to pass legislation that requires food manufacturers to label products containing genetically modified ingredients. But the historic legislation, pushed forward by consumer and environmental advocacy groups such as GMO Free CT, comes with a caveat. Before the new law can take effect, four other states, including at least one that borders Connecticut, must pass a similar bill, and a combination of northeastern states with a total population of 20 million must also approve GMO labeling legislation.

This “safety-in numbers” approach is an attempt to minimize the potential for lawsuits from food manufacturers. Until now, industry has successfully thwarted most attempts by the “right to know” movement, which emphasizes that the health risks  of GMOs are still unclear and that consumers have the right to choose safe food, to pass labeling laws. In Vermont, the threat of a lawsuit from Monsanto halted passage of a similar law in spring 2012. And during the November 2012 elections, California voters rejected Proposition 37, a ballot initiative that would have required GMO labeling, after Monsanto and other biotech companies spent approximately $50 million on advertising against the initiative.

This time around, the push for labeling laws could bear more fruit: Maine has already followed in Connecticut’s wake and approved its own labeling law (as in Connecticut, the Maine law is contingent on other nearby states passing their own bills), and 25 other states—including all of the northeastern states—have introduced legislation to require labeling or prohibit the production of genetically engineered foods, according to the Center for Food Safety.

Connecticut’s new law is part of a global effort to label or limit genetically engineered foods. In 2004, the European union introduced a universal labeling law for GMOs. More than 60 countries around the world have GMO labeling laws, and many have official bans on GMO cultivation.

Tara Cook-Littman of GMO Free CT told the Huffington Post that though the GMO labeling movement was at first dismissed as “a bunch of crazy moms and environmentalists,” things changed “when advocates were able to show themselves to be a serious movement with political power.”

Jessica Corbett is a former In These Times intern. She writes about politics, the environment and gender, and is currently based in New York City. Follow her on Twitter at @corbett_jessica.