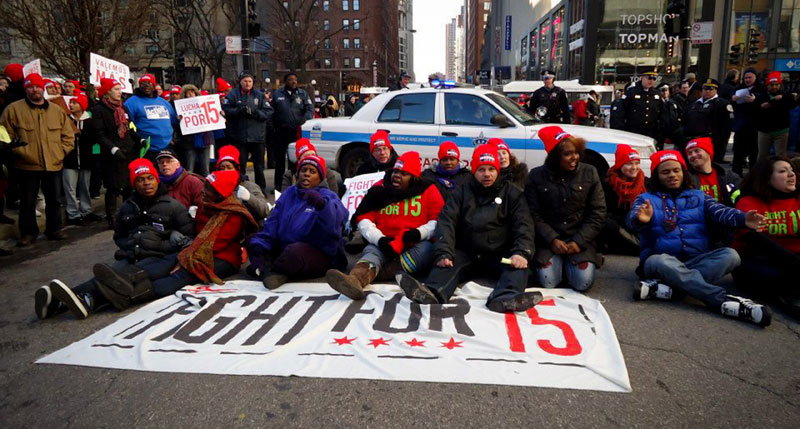 At the height of the December 2012 shopping season, 21 low-wage workers and supporters blocked traffic on the Magnificent Mile, Chicago's premier retail strip, demanding fair wages. (Courtesy of the WOCC)

How low-wage service workers are changing the face of labor.

Unbound by decades of legal decisions that hem in unions, the low-wage workers’ associations are freer to use more innovative and militant tactics, such as strikes.

As a worker at The Protein Bar, a quick-service eatery in Chicago’s glitzy North Michigan Avenue shopping district, Amie Crawford is very important to America’s unions: Even though she doesn’t belong to one, she may be a harbinger of new life for the labor movement at a time when even friends are preparing its obituary.

Last year, Crawford joined the “Fight for 15” campaign, a labor and community-supported project that aims to improve conditions for workers in Chicago’s central business districts. The campaign demands a $15 minimum wage and the right to form unions without interference from management.

Crawford recruited other fast food and retail workers to join neighborhood marches and helped form a workers’ association, Workers Organizing Committee of Chicago. On April 24, she and several hundred workers from about 30 businesses went on strike, cheered on by community groups like Arise Chicago, a faith-based worker center. The next day, members of these groups accompanied the strikers back to their jobs to shield them from potential retaliation. Crawford, empowered by the Chicago strike, volunteered a few days later to join Fight for 15 strikers in Milwaukee, one of seven cities where the campaign has taken hold, along with Chicago, New York, St. Louis, Detroit, Seattle and Washington, D.C.

These strikes have been the defining tactic of a new movement of low-wage service workers that has gained momentum in 2013. Small groups of workers have launched sudden strikes against big chains such as Wal-Mart and McDonald’s, as well as small employers such as car washes, laundries and taxi companies. In many cases, only a minority of employees were involved, sometimes from multiple workplaces. The strikes have typically been sudden and short, lasting just long enough to broadcast their message. A few campaigns have won union recognition; more have won small victories like a pay raise or a scheduling change. But taken together, the campaigns have surprised experts like Kate Bronfenbrenner, director of labor education research at Cornell University, who says she could not have imagined such an upsurge even two years ago.

“What’s new is that the strike is being embraced by a lot of groups as the central point of their strategy, instead of happenstance,” he says.

Crawford, a 57-year-old former interior designer who was pushed into the service industry by hard times, has seen firsthand how the strikes feed the movement’s growth. “The [Chicago Fight for 15] strike showed workers they could come out of the shadows and that they would be heard, and it showed businesses that we weren’t going to go away,” she says. “After the strike, workers sought us out, asking, ‘What is this?’ ”

Such enthusiasm leads Keith Kelleher, president of SEIU Healthcare Illinois & Indiana, to call the strikes “hugely significant” because they demonstrate a desire for organization within a large and growing sector of workers who have plenty of reason to be disgruntled. Service workers’ wages are rock-bottom and have seen little improvement over the last decade. Arbitrary and unpredictable work schedules offer too few hours and preclude workers from holding other jobs. And a growing number of workers, including those who are older, more experienced and better educated, find that such jobs are their only long-term prospect. According to the National Employment Law Project, 58 percent of jobs generated in the recovery from the 2008 financial crash have been low-wage, compared to 21 percent of jobs lost.

But traditional unions have had only limited success tapping service workers’ mounting frustrations. They have run up against several major obstacles: Service sector workplaces are typically small, turnover runs high and major chains pour in resources to crush organizing attempts. If union-busting efforts don’t succeed, chains like Wal-Mart often simply shutter unionized shops. So even if unions achieve isolated organizing victories, they still need to conquer whole markets or industries to make those changes stick. And as upset as many workers may be, they are often unfamiliar with or cynical about collective action at work.

That’s where the new movement comes in. Unbound by decades of legal decisions that hem in unions, the low-wage workers’ associations are freer to use more innovative and militant tactics, such as strikes, which capture attention and enlarge the movement. The law—and contracts—often restrict union tactics, limiting the timing of strikes or their use in support of other workers, for example. Violating these labor laws can be costly. When the mine workers union pulled out all the stops in its 1989 strike against Pittston Coal—occupying a mine, blocking roads and engaging in civil disobedience—it narrowly avoided paying $64 million in contempt-of-court fees and other penalties.

So unions, especially the United Food and Commercial Workers and the SEIU, increasingly help finance organizing projects like Fight for 15 that aren’t formal unions. Elaine Bernard, director of Harvard Law School’s Labor and Worklife Program, thinks the new movement has potential for dramatic growth if union leaders refrain from imposing their own preconceived structures. “Fund [the worker activity] and let it go,” she says. “This is a movement where a lot of different things should be tried.”

Indeed, campaigns such as Fight for 15, Warehouse Workers for Justice and Our Walmart appear to be giving newly recruited workers a significant voice. Many have an independent organizing committee to allow workers to take initiative.

The new campaigns also have a community focus often missing from more traditional union recruitment drives. Many have close ties to community groups, such as Action Now in Chicago or New York Communities for Change, for whom the struggle against inequality naturally leads to fighting for higher wages at work. In this way, the campaigns harken back to historic labor upsurges with a broad social base, like the Knights of Labor of the 1880s and the strike-based organizing of the 1930s.

Unlike labor’s recent strikes, which have been rare and mostly defensive, the low-wage worker strikes play energetic offense—building the local committees, engaging strikers in organizing and spreading a broader critique of employers like Wal-Mart and of public policy. “This is a shout to the American people about the terrible state of labor law,” says Bernard.

Lerner believes the strikes could help create the conditions for a wider surge of labor organizing, especially if the campaigns can articulate why workers’ success should matter to everyone and can escalate their actions while protecting strikers from retaliation.

But once they’ve built steam and support, how can campaigns like Fight for 15 force substantial changes in the workplace and establish a sustainable structure to deal with employers? Fight for 15 leaders have not spelled out their next steps, but many options are open to them. Low-wage workers could decide to form traditional unions. They could negotiate broad guidelines for their sectors with major employers or local merchants’ associations. They could lobby for better labor laws, like a higher minimum wage. Or they could maintain the current structure, a loose movement that uses direct actions such as strikes to win specific improvements.

Although it may seem hard to imagine at the moment, any of these pathways could evolve into a series of broad, citywide struggles reminiscent of the general strikes of the 1930s in San Francisco, Minneapolis and other cities, which led to the surge of unionization in the country. And considering the breadth of employers they confront, the campaigns could move the United States toward more of a European approach to setting minimum standards for particular industries.

In this way, an organizing campaign turns into a social movement, centered on worker rights but linked to many other key issues of politics and values. And a surge of worker organizing, some in novel forms, becomes an historical opportunity to change both politics and the world of work.