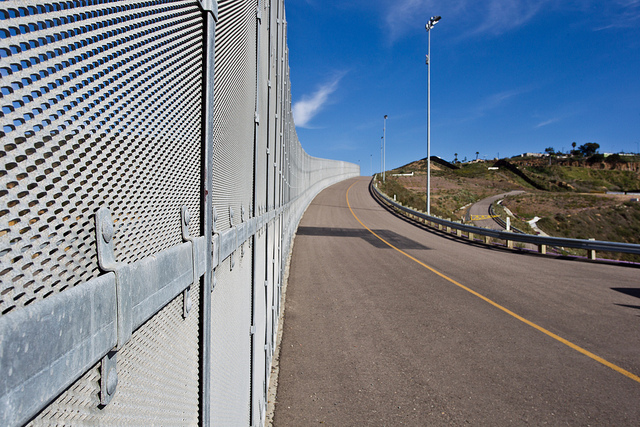 Who Owns the Earth?

Environmental degradation and the blurring of borders raise a serious question.

Almost all borders have been imposed and maintained by violence, and are quite arbitrary.

With wrenching tragedies only a few miles away, and still worse catastrophes perhaps not far removed, it may seem wrong, perhaps even cruel, to shift attention to other prospects that, although abstract and uncertain, might offer a path to a better world—and not in the remote future.

I've visited Lebanon several times and witnessed moments of great hope, and of despair, that were tinged with the Lebanese people's remarkable determination to overcome and to move forward.

The first time I visited—if that’s the right word—was exactly 60 years ago, almost to the day. My wife and I were hiking in Israel's northern Galilee one evening, when a jeep drove by on a road near us and someone called out that we should turn back: We were in the wrong country. We had inadvertently crossed the border, then unmarked—now, I suppose, bristling with armaments.

A minor event, but it forcefully brought home a lesson: The legitimacy of borders—of states, for that matter—is at best conditional and temporary.

Almost all borders have been imposed and maintained by violence, and are quite arbitrary. The Lebanon-Israel border was established a century ago by the Sykes-Picot Agreement, dividing up the former Ottoman Empire in the interests of British and French imperial power, with no concern for the people who happened to live there, or even for the terrain. The border makes no sense, which is why it was so easy to cross unwittingly.

Surveying the terrible conflicts in the world, it's clear that almost all are the residue of imperial crimes and the borders that the great powers drew in their own interests.

Pashtuns, for example, have never accepted the legitimacy of the Durand Line, drawn by Britain to separate Pakistan from Afghanistan; nor has any Afghan government ever accepted it. It is in the interests of today's imperial powers that Pashtuns crossing the Durand Line are labeled “terrorists” so that their homes may be subjected to murderous attack by U.S. drones and special operations forces.

Few borders in the world are so heavily guarded by sophisticated technology, and so subject to impassioned rhetoric, as the one that separates Mexico from the United States, two countries with amicable diplomatic relations.

That border was established by U.S. aggression during the 19th century. But it was kept fairly open until 1994, when President Bill Clinton initiated Operation Gatekeeper, militarizing it.

Before then, people had regularly crossed it to see relatives and friends. It's likely that Operation Gatekeeper was motivated by another event that year: the imposition of the North American Free Trade Agreement, which is a misnomer because of the words “free trade.”

Doubtless the Clinton administration understood that Mexican farmers, however efficient they might be, couldn't compete with highly subsidized U.S. agribusiness, and that Mexican businesses couldn't compete with U.S. multinationals, which under NAFTA rules must receive special privileges like “national treatment” in Mexico. Such measures would almost inevitably lead to a flood of immigrants across the border.

Some borders are eroding along with the cruel hatreds and conflicts they symbolize and inspire. The most dramatic case is Europe. For centuries, Europe was the most savage region in the world, torn by hideous and destructive wars. Europe developed the technology and the culture of war that enabled it to conquer the world. After a final burst of indescribable savagery, the mutual destruction ceased at the end of World War II.

Scholars attribute that outcome to the thesis of democratic peace—that one democracy hesitates to war against another. But Europeans may also have understood that they had developed such capacities for destruction that the next time they played their favorite game, it would be the last.

The closer integration that has developed since then is not without serious problems, but it is a vast improvement over what came before.

A similar outcome would hardly be unprecedented for the Middle East, which until recently was essentially borderless. And the borders are eroding, though in awful ways.

Syria's seemingly inexorable plunge to suicide is tearing the country apart. Veteran Middle East correspondent Patrick Cockburn, now working for The Independent, predicts that the conflagration and its regional impact may lead to the end of the Sykes-Picot regime.

The Syrian civil war has reignited the Sunni-Shiite conflict that was one of the most terrible consequences of the U.S.-U.K. invasion of Iraq 10 years ago.

The Kurdish regions of Iraq and now Syria are moving toward autonomy and linkages. Many analysts now predict that a Kurdish state may be established before a Palestinian state is.

If Palestine ever gains independence in something like the terms of the overwhelming international consensus, its borders with Israel will likely erode through normal commercial and cultural interchange, as has happened in the past during periods of relative calm.

That development could be a step toward closer regional integration, and perhaps the slow disappearance of the artificial border dividing the Galilee between Israel and Lebanon, so that hikers and others could pass freely where my wife and I crossed 60 years ago.

Such a development seems to me to offer the only realistic hope for some resolution of the plight of Palestinian refugees, now only one of the refugee disasters tormenting the region since the invasion of Iraq and Syria's descent into hell.

The blurring of borders and these challenges to the legitimacy of states bring to the fore serious questions about who owns the Earth. Who owns the global atmosphere being polluted by the heat-trapping gases that have just passed an especially perilous threshold, as we learned in May?

Or to adopt the phrase used by indigenous people throughout much of the world, Who will defend the Earth? Who will uphold the rights of nature? Who will adopt the role of steward of the commons, our collective possession?

That the Earth now desperately needs defense from impending environmental catastrophe is surely obvious to any rational and literate person. The different reactions to the crisis are a most remarkable feature of current history.

At the forefront of the defense of nature are those often called “primitive”: members of indigenous and tribal groups, like the First Nations in Canada or the Aborigines in Australia—the remnants of peoples who have survived the imperial onslaught. At the forefront of the assault on nature are those who call themselves the most advanced and civilized: the richest and most powerful nations.

The struggle to defend the commons takes many forms. In microcosm, it is taking place right now in Turkey's Taksim Square, where brave men and women are protecting one of the last remnants of the commons of Istanbul from the wrecking ball of commercialization and gentrification and autocratic rule that is destroying this ancient treasure.

The defenders of Taksim Square are at the forefront of a worldwide struggle to preserve the global commons from the ravages of that same wrecking ball—a struggle in which we must all take part, with dedication and resolve, if there is to be any hope for decent human survival in a world that has no borders. It is our common possession, to defend or to destroy.

Open the Borders. Open the Prison Gates. Don’t Sacrifice a Single Person to This Virus.