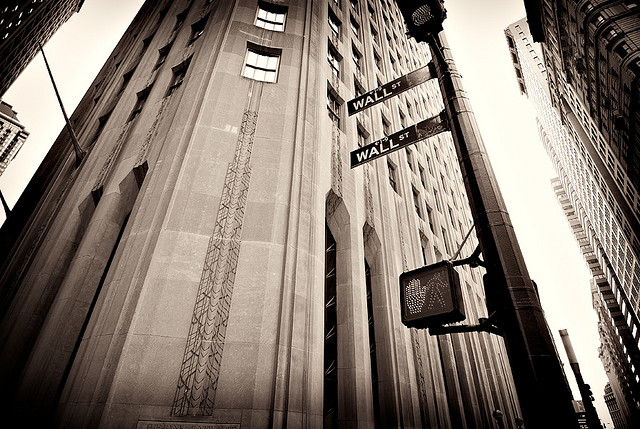 Despite wreaking havoc on the economy in 2008, banks are bigger and more powerful today. (Emmanuel Huybrechts/Flickr/Creative Commons)

Who Will Stand Up to Wall Street?

While the House continues kowtowing, a select few in the Senate are working to tame the banks.

Americans have the right to make the rules for corporations, particularly ones like banks that have failed spectacularly at self-governance.

Well, if you’re a Wall Street banker, that is. Not if you’re a college student looking for a loan. Because bankers and Congress don’t intend to give you a break today.

Not if you’re one of the hundreds of thousands of workers furloughed because of the sequester. Because Congress has no intention of charging highflying banks a financial transaction tax, the revenues from which could prevent many of those cuts.

Not if you’re one of those middle class Americans who bailed out the banks and now fears renewed recklessness on Wall Street will require another rescue. Because Wall Street has persuaded Congress that it really, really should not closely regulate banks.

But, hey, they’re partying on Wall Street, right? The thing is, people are supposed to rule. Not Wall Street, not banks, not money. People rule in a democracy. This is something apparently forgotten by some in Congress. Banks are corporations, which are legal entities established under rules written by people. Their existence should advance America and Americans. Not the other way around. Many in Congress need to be reminded of that.

Start with the U.S. House of Representatives. Just last month, the House passed measures to reverse regulations in the 2010 Dodd-Frank Wall Street Reform and Financial Protection Act and to deregulate derivatives, those high-risk financial instruments at the heart of the 2008 market collapse.

Members of the House lost sight of who they work for, who rules. Here’s a hint: It’s not banks.

Over in the Senate, by contrast, several lawmakers have made it clear they know people rule. Two groups of Senators are working to strengthen financial regulation.

A Democrat and a Republican, Sen. Sherrod Brown of Ohio and Sen. David Vitter of Louisiana, introduced legislation requiring big banks to increase the capital they must hold to cover losses. That would diminish risk of another taxpayer bailout. It would also encourage the nation’s largest banks to break into smaller financial institutions with reduced capital requirements.

Similarly, two Democrats, a Republican, and an independent in the Senate introduced legislation to update and reinstate the Glass-Steagall regulations that prevented market crashes for 70 years—from the time they were passed in 1933 in response to the Great Crash until 1999, just nine years before the 2008 crash that caused the Great Recession.

The 21st Century Glass-Steagall Act would restore the regulations that prohibited banks that use federal deposit insurance from engaging in risky Wall Street activities like swaps dealing. The key sponsor is Elizabeth Warren, the Democrat from Massachusetts who succeeded in getting the Consumer Financial Protection Bureau included in the Dodd-Frank law. She’s intent on ending too-big-to-fail banks. She says bankers are free to gamble on Wall Street, but not with the federally insured money in Main Street Americans’ checking and savings accounts.

Republican John McCain of Arizona is with her. Which is remarkable because he voted to repeal the original Glass-Steagall Act.  He says overturning Glass-Steagall was a mistake because “a culture of dangerous greed and excessive risk-taking has taken root in the banking world” imperiling everyday bank customers.

Some bankers agree with them. That includes bankers who pushed for repeal of Glass-Steagall like Sanford “Sandy” Weill. He engineered mergers of traditional and investment banks to create Citigroup. Taxpayers forked over $476 billion to rescue Citigroup, the largest of the bank bailouts.

Despite that support and despite the fact that the four biggest banks now are 30 percent larger than they were at the time of the crash and continue high-risk practices, previous attempts to revive Glass-Steagall failed. Warren and McCain aren’t backing down, though. They want bank rules that protect Americans. They don’t believe banks rule.

Warren made that clear on another matterl—borrowing for tuition. She called for the interest rate on student loans to equal the rate that the Federal Reserve grants big banks.

Unfortunately, the majority in Congress failed to agree with her that the government should give students the same deal it gives banks. Instead, Congress is proposing legislation that would set the student rate at 3.85 percent for one year, but after that allow it to rise up to 8.25 percent. That rate increase would hit about 7 million students a year. But not banks.

That suggests a Congress that is ruling for banks—as does its failure to adopt a financial transaction fee. This tiny tax, about 3 cents on every $100 traded as currently proposed, would cool risky high-speed trading and raise about a third of the money needed to restore programs cut by the sequester.

Clearly, when six Wall Street banks can make $23 billion in three months, they can afford to pay this fee. Still, they’ll hand over millions to lobbyists to avoid it—just like they did to prevent reinstatement of Glass-Steagall. JPMorgan Chase spent $8 million lobbying last year; Wells Fargo, $6.8 million; Citigroup, $5.6 million.

Congress should pass the tax anyway. And Glass-Steagall. And a student loan rate matching the Federal Reserve rate for banks. Americans have the right to make the rules for corporations, particularly ones like banks that have failed spectacularly at self-governance.