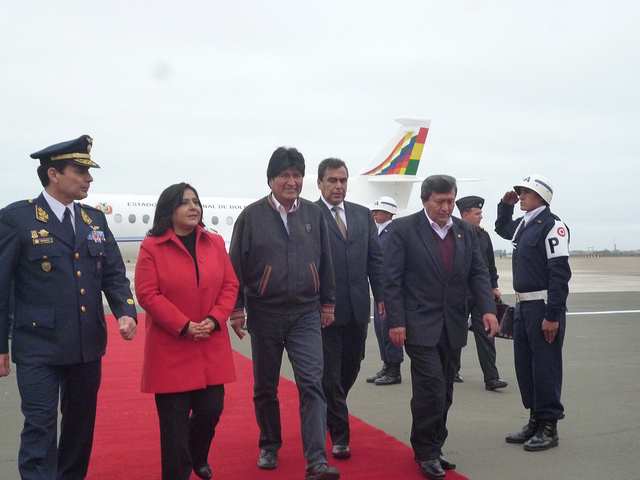 Is Edward J. Snowden Aboard This Plane?

America’s imperial power is on the decline, to the world’s benefit.

Governments always plead security as an excuse—in the Snowden case, security from terrorist attack. This pretext comes from an administration carrying out a grand international terrorist campaign with drones and special operations forces that is generating potential terrorists at every step.

On July 9, the Organization of American States held a special session to discuss the shocking behavior of the European states that had refused to allow the government plane carrying Bolivian President Evo Morales to enter their airspace.

Morales was flying home from a Moscow summit on July 3. In an interview there he had said he was open to offering political asylum to Edward J. Snowden, the former U.S. spy-agency contractor wanted by Washington on espionage charges, who was in the Moscow airport.

The OAS expressed its solidarity with Morales, condemned “actions that violate the basic rules and principles of international law such as the inviolability of Heads of State,” and “firmly” called on the European governments - France, Italy, Portugal and Spain - to explain their actions and issue apologies.

An emergency meeting of UNASUR—the Union of South American Nations—denounced “the flagrant violation of international treaties” by European powers.

Latin American heads of state weighed in, too. President Dilma Rousseff of Brazil expressed the country's “indignation and condemnation of the situation imposed on President Evo Morales by some European countries” and warned that this “serious lack of respect for the law…compromises dialogue between the two continents and possible negotiations between them.”

With virtually identical reservations, two states refused to sign the OAS resolution: the United States and Canada. Their growing isolation in the hemisphere as Latin America frees itself from the imperial yoke after 500 years is of historic significance.

Morales' plane, reporting technical problems, was permitted to land in Austria. Bolivia charges that the plane was searched to discover whether Snowden was on board. Austria responds that “there was no formal inspection.” Whatever happened followed warnings delivered from Washington. Beyond that the story is murky.

Washington has made clear that any country that refuses to extradite Snowden will face harsh punishment. The United States will “chase him to the ends of the earth,” Sen. Lindsey Graham warned.

But U.S. government spokespersons assured the world that Snowden will be granted the full protection of American law - referring to those same laws that have kept U.S. Army soldier Bradley Manning (who released a vast archive of U.S. military and diplomatic documents to WikiLeaks) in prison for three years, much of it in solitary confinement under humiliating conditions. Long gone is the archaic notion of a speedy trial before a jury of peers. On July 30 a military judge found Manning guilty of charges that could lead to a maximum sentence of 136 years.

Like Snowden, Manning committed the crime of revealing to Americans—and others—what their government is doing. That is a severe breach of “security” in the operative meaning of the term, familiar to anyone who has pored over declassified documents. Typically “security” means security of government officials from the prying eyes of the public to whom they are answerable—in theory.

Governments always plead security as an excuse—in the Snowden case, security from terrorist attack. This pretext comes from an administration carrying out a grand international terrorist campaign with drones and special operations forces that is generating potential terrorists at every step.

Their indignation knows no bounds at the thought that someone wanted by the United States should receive asylum in Bolivia, which has an extradition treaty with the U.S. Oddly missing from the tumult is the fact that extradition works both ways—again, in theory.

Last September, the United States rejected Bolivia's 2008 petition to extradite former president Gonzalo Sánchez de Lozada—“Goni”—to face charges of genocide and crimes against humanity. It would, however, be an error to compare Bolivia's request for extradition with Washington's, even if we were to suppose that the cases have comparable merit.

St. Augustine calls the pirate's answer “elegant and excellent.” But the ancient philosopher, a bishop in Roman Africa, is only a voice from the global South, easily dismissed. Modern sophisticates comprehend that the Emperor has rights that little folk like Bolivians cannot aspire to.

Goni is only one of many that the Emperor chooses not to extradite. Another case is that of Luis Posada Carriles, described by Peter Kornbluh, an analyst of Latin American terror, as “one of the most dangerous terrorists in recent history.”

Posada is wanted by Venezuela and Cuba for his role in the 1976 bombing of a Cubana commercial airliner, killing 73 people. The CIA and FBI identified him as a suspect. But Cubans and Venezuelans also lack the prerogatives of the Emperor, who organized and backed the reign of terror to which Cubans have been subjected since liberation.

The late Orlando Bosch, Posada's partner in terrorism, also benefited from the Emperor's benevolence. The Justice Department and FBI requested that he be deported as a threat to U.S. security, charging him with dozens of terrorist acts. In 1990, after President George H.W. Bush overturned the deportation order, Bosch lived the rest of his life happily in Miami, undisturbed by calls for extradition by Cuba and Costa Rica, two mere pirates.

Another insignificant pirate is Italy, now seeking the extradition of 23 CIA operatives indicted for kidnapping Hassan Mustafa Osama Nasr, an Egyptian cleric in Milan, whom they rendered to Egypt for torture (he was later found to be innocent). Good luck, Italy.

There are other cases, but the crime of rendition returns us to the matter of Latin American independence. The Open Society Institute recently released a study called “Globalizing Torture: CIA Secret Detention and Extraordinary Rendition.” It reviewed global participation in the crime, which was very broad, including among European countries.

Latin American scholar Greg Grandin pointed out that one region was absent from the list of shame: Latin America. That is doubly remarkable. Latin America had long been the reliable “backyard” for the United States. If any of the locals sought to raise their heads, they would be decapitated by terror or military coup. And as it was under U.S. control throughout the latter half of the last century, Latin America was one of the torture capitals of the world.

That's no longer the case, as the United States and Canada are being virtually expelled from the hemisphere.