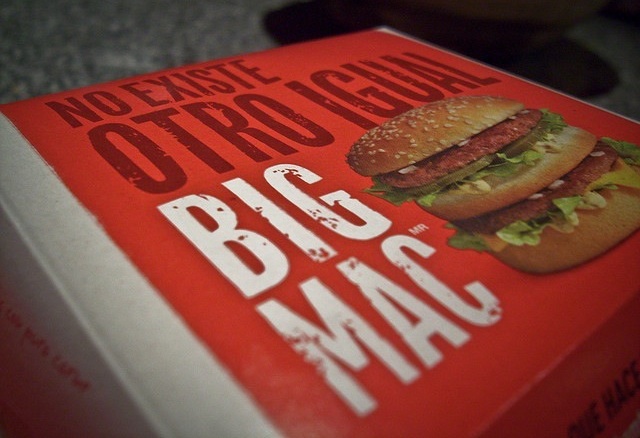 Researchers estimate that raising the minimum wage to $10.50 an hour would result in just a nickel increase in the price of a Big Mac. (Geronimo de Francesco / Flickr / Creative Commons)

Pennies at the Register, Dollars in the Paycheck

Would higher wages really be ‘devastating’ for individual consumers?

According to a recent study, raising the wages of all of Walmart's employees to at least $12 an hour would cost the average customer just 46 cents more during their typical trip to the store.

You know the boilerplate argument against higher wages in America, because you've heard it so many times from Fox News' and CNBC pundits. But as service industry workers now mount protests against poverty-level pay and as the Associated Press reports that “four out of 5 U.S. adults struggle with joblessness, near-poverty or reliance on welfare,” it is worth reviewing the blowhard's case for low wages one more time - just to see whether it even makes sense.

What gives these assertions such mass appeal is their populist insinuation that higher wages would hurt the Average Joe. Ultimately, that Average Joe is supposed to conclude that the supposed harm modest wage increases will inflict on him will be far greater than the benefit they will generate for him and the economy as a whole.

For the sake of evaluating this particular conclusion, let's set aside all of the other moral and economic questions at play in the larger debate over wages. Let's, for instance, bypass a discussion about why the richest nation on earth has a $7.25-an-hour federal minimum wage that condemns many workers to destitution. Let's also for a moment disregard the fact that CEOs of the biggest restaurant companies make more in a morning than the average minimum-wage worker in their companies make in a year. Let's even ignore evidence that raising the minimum wage boosts the economy by putting money in the hands of those who will most quickly spend it.

Let's instead focus on a very simple question: Is it really true that higher wages would be devastating for individual consumers?

The answer, it seems, depends on your definition of “devastating.” Is 5 cents really “devastating”? What about 22 cents or 46 cents? Does that somehow qualify as “devastating”?

Those figures aren't pulled out of thin air— they come from three data-driven reports proving that it costs mere pennies at the register to put more dollars in millions of Americans' paychecks.

The first analysis comes from 100 economists who, in a letter to policymakers, estimated that raising the minimum wage to $10.50 an hour would result in just a nickel increase in the price of a Big Mac. That was followed up by a report in Newsweek based on the calculations of University of Massachusetts economists. They found that raising McDonalds’ workers wages to $15 an hour would likely add just 22 cents to the retail price of the same sandwich.

It is much the same for Wal-Mart. According to a study by researchers at the City University of New York and the University of California, raising the wages of all of the retailers' employees to at least $12 an hour would cost the average customer just 46 cents more during their typical trip to the store. Over an entire year, that's just $12.50.

With those numbers in mind, let's circle back to the concept of harm by considering what is more devastating: wages that relegate millions of people to a life of poverty or having to fork over just a bit more pocket change during your next trip to McDonalds and Wal-Mart?

As Congress contemplates raising the minimum wage and more workers take collective action in the fight for better pay, the answer should be more obvious than ever.