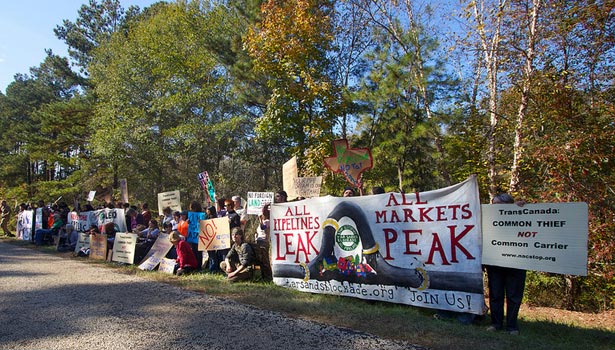 Tar Sands Drones Are On Their Way

The energy industry wants to use unmanned aerial vehicles to monitor pipelines.

It isn’t all that difficult to imagine a scenario in which hundreds of pipeline drones are actively working to block direct action across the continent.

North American energy companies are planning to use drones to monitor their pipelines—in part to check for potential gas or oil leaks, but also to limit “third-party intrusions,” a broad range of activity that includes anything from unwanted vehicles entering restricted areas around pipelines to environmental activists.

The Pipeline Research Council International (PRCI), a multi-national organization funded by some of the world’s largest pipeline operators like BP, Shell, TransCanada and Enbridge, is leading efforts to research and develop unmanned aerial vehicle (UAV) technology for pipeline monitoring. The PRCI has been working with the American Petroleum Institute and the Interstate Natural Gas Association on drone research for the last two years, according to PRCI President Cliff Johnson. He says researchers are currently running test flights.

“It could be a more efficient and more cost-effective tool … than a manned system,” Johnson says.

Today, companies often rely on piloted aircraft for pipeline monitoring. That involves surveillance of the pipeline’s “right of way,” a strip of land surrounding the pipeline whose rights are typically shared by pipeline operators and landowners. In the right of way, which can range from about 25 to 125 feet, companies check for unauthorized vehicles, people and anything else that’s not supposed to be there. Meanwhile, companies engage in additional environmental monitoring to check for potential threats to the integrity of the pipeline, such as leakage.

Drones may ultimately be able to accomplish both of these monitoring tasks more effectively than humans, says Peter Lidiak, pipeline director at the American Petroleum Institute (API). Lidiak believes that pipeline operators will start adopting drones in the next five to 10 years.

These drones will probably be deployed in the United States before taking off in Canada. In 2015, the Federal Aviation Authority (FAA) will release its regulations for commercial drones, paving the way for thousands of UAVs to enter domestic airspace. Canada, on the other hand, does not yet have any such plans. The country’s FAA equivalent, Transport Canada, does issue licenses for commercial drones, but the existing regulations are stringent.

But this doesn’t mean Canada will miss out on all the action—especially once multi-nationals like TransCanada, which operate on both sides of the border, start using drones on the American segments of their network.

“Given that Canada and the United States, in terms of energy, are very closely connected, I can’t see but that once the restrictions are lifted in the States, there won’t be pressure to do so in Canada,” says Angela Gendron, a national security expert and senior fellow at Carleton University’s Canadian Centre of Intelligence and Security Studies.

The use of drones to monitor pipelines, like any other form of domestic surveillance, raises an array of privacy concerns.

In the eyes of the energy industry, anything entering the pipeline’s right of way is ultimately considered a security threat. The logic behind drone surveillance is focused on making it easier for companies to detect those threats—an ambiguous concept that can refer to animals, vehicles, non-violent protesters, violent protesters or unauthorized developers.

Paul Drover, the executive director of Unmanned Systems Canada, the nation’s top drone lobby, advertises the benefits of pipeline UAVs by pointing out their ability to scan for environmental activists. At the international drone lobby’s annual convention in Washington last week, Drover told In These Times that aerial surveillance from UAVs would enable pipeline companies to better detect “folks setting up camp.” When asked if he was referring to activists, Drover replied “that’s the left side of the arc.”

The API's Lidiak insists that concerns about environmental activism are not driving industry interest in developing drones. Yet he acknowledges that protesters could be covered as potential intruders.

“The primary reason for those monitoring for any kind of intrusion, whether it’s individuals that are potentially protesting or for construction equipment, is really to find out if there’s anyone doing anything on the right of way that might be harmful for the pipeline,” Lidiak says. “The primary purpose wouldn’t be monitoring for activists. You might be able to detect that activity as a result of doing your patrols, but that’s not the primary reason for any kind of patrolling.”

Angela Gendron, who wrote a December 2010 report for Canada’s Department of National Defence about the need to protect the nation’s “critical energy infrastructure,” says that monitoring activists makes a lot of sense from the energy industry’s perspective.

“You do get security officers at private-sector energy companies who are very concerned about environmental activists and I can see that they would feel that a UAV sitting up there hovering for 19 hours or whatever [it may be] would be quite useful,” Gendron says. “As it now stands, they have to rely on police reports and anything else they have on hand to monitor where those activists are going to demonstrate next and so on. Having a UAV up there would be much a more economic measure.”

While the industry appears to only be interested in using drones on completed pipelines for now, UAVs could potentially be used in the future to monitor pipelines under construction. The technology may not be ready today, but if industry enthusiasts are to believed, drones could be a fixture of pipelines 10 to 20 years from now. And with the expansion of the natural gas industry combined with an oil industry eager to link Albertan tar sands to global export markets, pipeline construction doesn’t exactly show signs of slowing down.

As those plans face increased pushback from climate justice activists—whether it’s from radicals in the Great Plains or First Nations groups in western Canada—it isn’t all that difficult to imagine a scenario in which hundreds of pipeline drones are actively working to block direct action across the continent.

Catherine Crump, staff attorney at the American Civil Liberties Union, says that “narrowly-targeted” pipeline monitoring isn’t necessarily problematic in itself, but warns about its potential for abuse. “I think drones raise the prospect that Americans will be subjected to constant aerial surveillance in ways they’ve never experienced before and that poses the possibility of changing our ability to engage in political protest,” Crump says.

Jesse Coleman, a Washington, D.C.-based researcher for Greenpeace, points to the fact that TransCanada recently colluded with law enforcement officials to infiltrate a camp of anti-pipeline activists in Oklahoma to block a protest from taking place.

“To think they would do that and not use drones to spy on their opposition, I think that’d be a little naïve,” Coleman says. “You are flying over all these miles of pipeline and picking up all this information. What happens when you do see things that are interesting to you? There are so many ethical considerations.”

Drones could also infringe on the privacy of residents who sign agreements with energy companies to allow pipelines to cross their property.

“I would suggest that folks did not sign up for video surveillance when they signed easement contracts,” says Ron Seifert, spokesperson for the Tar Sands Blockade, an activist group trying to prevent construction of the Keystone XL’s southern segment in Texas and Oklahoma. “Of course, keep in mind that a lot of these easements go right through landowners’ front yards and backyards. Does that mean that every time they go outside they have to worry that TransCanada, a multinational corporation who is known to share information with the federal government, might be filming them? Does that mean in signing a contract with TransCanada folks are subjected to surveillance and sharing information with the government?”

But Seifert says he wouldn’t expect drone surveillance to dissuade climate justice activists, many of whom are already unafraid of engaging in civil disobedience and risking arrest.

“Regardless of the type of surveillance, I think folks have come to the conclusion that those risks are necessary to take,” he says. “Because to not take action is far more dangerous than to set up a blockade or participate in direct action. We all know that tar sands infrastructure is too dangerous to exist. It’s a threat to the future of the planet.”