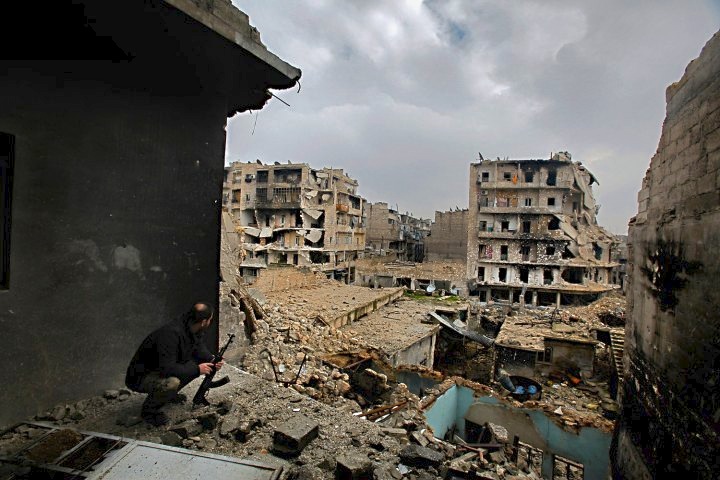 How the Syrian Revolution Went Wrong

With the opposition fracturing, is there still hope for a Syrian Spring?

It seems extremely unlikely at this point that the revolution will succeed. It was never going to be easy to break away the regime’s base, but if it hasn’t happened before this point in the struggle, it is less likely to happen now.

People are rebuilding institutions, they are managing their cities after the fall of the state and the regime, and it is a very challenging task to do because there are no resources, there is no funding, and there are permanent attacks by the regime. Those areas I’m talking about in the north are liberated: there are no clashes on the ground. But there are constant airstrikes and missiles are launched on these cities.

So people are coming up with creative solutions: they are creating political institutions. There are local councils in each one of those cities and they meet on a weekly basis. They discuss everything in the city and they try to solve their problems.

But no good revolution goes unpunished.

The incipient revolution against the Assad regime has been punished by every available means.

It has been pummeled from the air, missiles ripping through liberated territories.

It has been ripped to pieces from the ground, well-accoutered loyalist forces machine-gunning deserters.

It has been tormented with clouds of poisonous gas, which cause victims to die slowly and helplessly as their bodies are paralyzed and breathing shut down.

It has buried tens of thousands of bodies. The UN report identifies some 100,000 total killed in a war that has taken a bloody toll on all sides. The Syrian Observatory for Human Rights suggests a similar figure, 21,850 of whom were rebel fighters, 40,146 civilians and 45,000 regime fighters.

This is a mournful state of affairs for a revolutionary movement that grew out of the heady promise of the Arab Spring. The Syrian revolution began as one of a series of democratic uprisings throughout the Middle East and North Africa in early 2011. Protests started in the Syrian city of Daraa, over the arrest and torture of students for graffiti against the regime, and escalated to nationwide demonstrations after regime forces killed several people.

Repression was the default regime response but, as the protests spread, the government undertook a more complex strategy. It continued to repress the uprising, but simultaneously offered reforms, such as removing the niqab ban, and lifting the “state of emergency” law, which was a key demand of the protesters. Yet by this point the opposition wanted far more fundamental democratic change, which the regime could not deliver. The persistence of the protests led to an outright military response on the part of the regime, beginning with the deployment of the Syrian army in Daraa on April 25, 2011.

The uprising was forced, from this point on, to acquire an armed wing. This it did in a painfully slow and syncopated fashion, with poorly armed local militias forming. Finally, at the end of July 2011, a group of officers who had defected from the armed forces announced the formation of the Free Syrian Army as an umbrella group linking the armed opposition. In practice, however, the armed opposition has remained fragmented and politically incoherent. The aspiring leadership remained distant, disconnected from the grassroots. It is this which created spaces in which relatively marginal sectarian jihadi groups could begin to get a foothold, and in which regional powers could begin to look for local auxiliaries.

The uprising has subsequently been slowly strangled in a mesh of client-relationships as, initially unarmed and helpless in the face of Assad’s forces, its various presumptive leaderships aligned with Turkey, Qatar, Saudi Arabia, France, anyone who would offer leverage or weapons. It has developed within its ranks what looks like a counterrevolution within the revolution, as sectarian jihadis such as Al Nusra (misleadingly referred to as “Al Qaida”) have taken over freed towns and jailed opposition activists. The formation of a new opposition group, federating eleven Islamist groups in opposition to the National Coalition, indicates that the jihadis are gaining ground. Notably, this alliance includes not just the extant Islamist groups but also sections of the Free Syrian Army.

There is a revolution, but it is losing. It is sometimes suggested that the revolution’s major difficulty has been a lack of weapons relative to the state’s overwhelming military strength. If only the revolution was armed with something other than a few Saudi or Qatari supplied pea-shooters… It’s a nice thought, but it’s already outdated. It has taken some time and some frantic negotiations, but weapons from the U.S. are in fact being delivered to the Syrian opposition. France has been involved in training opposition fighters, and the U.S. has been training a more limited number of FSA soldiers in Jordan. The arms are mainly ‘light’ weaponry such as machine guns for the moment, although it also includes sophisticated non-lethal equipment to help weather attacks and coordinate offensives.

More to the point, there is so much more holding back the revolution than a lack of weapons. While it doesn’t do to wag fingers at people fighting for their lives and political freedom, it is essential to soberly recognise the limits of the revolutionary process in Syria.

But first, from an analytical perspective, it is important not to reify “the regime.” There is no “the regime” in any simple way; as with any state, there is only a set of relations between various institutions and forces operating in and through them. There are divergent interests and conflicts—indeed, this very fact may help explain how a chemical weapons attack was perpetrated on civilians while UN weapons inspectors were in the country. Had the revolution succeeded in winning over a significant component of the regime’s base, it seems very likely that more state forces would have broken away than in fact did, and the military situation would have been decidedly different. Politics is the dominant factor here; military consequences follow.

A significant factor in the revolution’s failure to spread is that the opposition has been hopelessly divided throughout this fight. The founding of the National Coalition for Syrian Revolutionary and Opposition Forces, (representing a fusion of all the major Islamist and secular forces, and incorporating the Free Syrian Army (FSA) and the Local Coordinating Committees), was supposed to have overcome this. Likewise, the formation of the Supreme Joint Military Command was to have overcome the operational divisions between fighting forces. Between them, these two organisations would form the basis for a post-Assad government and security force. In practice, there is little coordination or political federation between the forces fighting on the ground. Command structures have improved, but remain disarticulated, and diverse sources of funding and weapons inhibit unity. The leadership in the National Council is divided between clients of different Gulf regimes.

The sectarianism built into the Syrian state has also undermined the prospects for unity. The troops, intelligence and police operatives working for the regime are overwhelmingly Alawites. The protesters Assad began by murdering were overwhelmingly Sunni, and his response to the uprising has been to characterise it as a Sunni fundamentalist attack on the Alawite minority. This not only vilified the opposition, but also linked the fate of religious minorities—above all the Alawites—to the fate of the regime. The toxic intersection of violent repression and sectarian fomentation on the part of the state was escalated with the deployment of the shabiha (loyalist militias dressed in civilian clothing), who have carried out some of the worst atrocities. It is patronising to claim that sectarianism in the opposition is just a reflection of the regime’s behaviour. But the regime’s divide-and-conquer strategy certainly fueled the spread of existing sectarianism and helps to explain—in tandem with the manifest weaknesses of the extant secular opposition—how organised sectarian forces have come to the fore in the opposition.

Notably, a major point of division within the revolution is precisely the issue of US imperialism. It has been clear for a while that the dominant opposition figures were looking for military intervention to tip the balance of forces in their favour. The US, responding to the sarin gas attack in a Damascus suburb, recently threatened military intervention, and, despite the evident reluctance of allies to join in a full bombing attack, Obama began expanding the US Navy’s presence in the Mediterranean in preparation for an attack. The rationale for the attack—which has been seemingly deferred indefinitely pending the outcome of U.S.-Russian negotiations—was to “punish” the use of chemical weapons: a more futile argument for war has rarely been offered.  “Punishment” in this context is incredibly nebulous: anything from breaking a window to destroying some military installations to full-scale invasion could constitute “punishment.” How much “punishment” is sufficient? What can be achieved by this that could not be achieved by the usual elite negotiations? At any rate, the Syrian opposition is divided, with the jihadi groups positioning themselves as the most hardened anti-imperialists. Full-blown warfare has broken out in the areas freed from government control between FSA battalions and jihadists, who are in turn waging a military struggle among themselves.

This raging battle is all the more incapacitating given the disproportionate role that salafist jihadi groups have assumed in the armed struggle. Despite certain alarmist reports which tend to merge salafist fighters with ‘Islamists’ in toto, these particular Islamist groups—who practise a literalistic and puritanical version of Islam—probably represent a minority of the total fighters. But the salafists are nonetheless better organised, according to the UN commission report, they have taken part in every major military operation of the opposition and have led a number of them. According to Foreign Policy, “jihadists are still the rebels' most lethal weapon. Jihadist suicide attacks have been responsible for some of the most important strategic gains recently: Rebel groups besieged Mennagh military airbase in Aleppo for more than a year, for example, but were unable to completely capture it—until [the jihadi group] ISIS dispatched its suicide bombers on Aug. 5. The same thing happened at the Hamidiya military complex in the northern province of Idlib last month.” The salafists’ disproportionate role exacerbates sectarianism and suppresses opposition activism, retarding the development of the revolution.

It seems extremely unlikely at this point that the revolution will succeed. It was never going to be easy to break away the regime’s base, but if it hasn’t happened before this point in the struggle, it is less likely to happen now. The sectarian dynamic which the state has done so much to cultivate has a feedback effect in consolidating the unity and determination of loyalist fighters. There appear to be no good outcomes. The Syrian opposition may be forced to choose between years of a just war against a regime degenerating further into civil war and sectarian murder within a tripartite Syria, and an unjust peace, most likely negotiated between the US and Russia as much as between the opposition and the Syrian power bloc. Only Syrians can make that choice; others are fortunate not to have to.

Richard Seymour is a Northern Irish writer and owner of the popular blog Lenin's Tomb. He has written for The Guardian, London Review of Books, and Al Jazeera and is the author of several books, most recently Corbyn: The Strange Rebirth of Radical Politics (Verso).