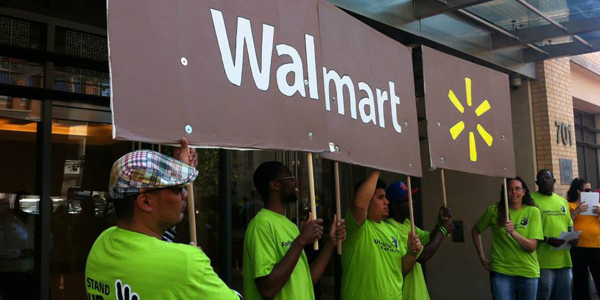 Protesters stand against Wal-Mart's low wages and unjust treatment of workers at an August action in Washington, D.C. (OURWalmart)

American Workers: From Bounty to Bleakness

This Thanksgiving, many American workers won’t share in the bounty they helped create.

The six Waltons who own Wal-Mart are the richest family in the world ... Meantime, the Waltons pay such poverty wages that Wal-Mart workers can’t afford their own Thanksgiving meals.

At the first Thanksgiving, there was no expression of the sentiment: “I built this feast by myself.” Native Americans sat side by side with pilgrims—religious leader by huntsman, chief by planter. They shared the bounty they’d all worked to create.

This Thanksgiving will be very different for too many American workers. They won’t share in the bounty they helped create. The perfect symbol of that is an Ohio Wal-Mart placing bins in an employee-only area asking low-paid workers to donate Thanksgiving food to their low-paid colleagues.

The six Waltons who own Wal-Mart are the richest family in the world. They’re worth $102.7 billion, more than America’s poorest 49 million families put together. The Waltons’ turkeys will be served with gold leaf on gold platters. By private chefs. On very, very private estates. There won’t be any Wal-Mart greeters or cashiers or stock boys sitting side by side with Waltons at their opulent celebration of bounty. Meantime, the Waltons pay such poverty wages that Wal-Mart workers can’t afford their own Thanksgiving meals. The Walton heirs’ gluttonous, aristocratic attitude betrays the promise of the New World.

It’s not unique to the Waltons, although they bear special responsibility as the nation’s largest private sector employer, one that made $15.7 billion last year.  Other highly profitable corporations, particularly fast food restaurants, also pay poverty wages to workers while handing to CEOs and stockholders virtually all of the benefits derived from front-line labor.

McDonald’s, like Wal-Mart, is so immersed in this patrician philosophy that it offers its 700,000 U.S. workers clueless advice instead of decent wages. Earlier this year, McDonald’s provided workers with a budget to help them make ends meet on pittance pay. McDonald’s told them to take a second job, work 80 hours a week! Even then, the budget didn’t account for heating bills.

A raise would work much better for most workers. That’s exactly what McDonald’s gave its CEOs last year. It tripled the pay of its new and retiring CEOs. The new guy, Jim Skinner, now gets $27.7 million. That’ll buy a lot of turkeys.

Now, on the eve of Thanksgiving, McDonald’s has offered its workers some more advice—including breaking their food into small pieces so they’ll feel full after eating less. Good advice for workers who can’t afford a Happy Meal, let alone a turkey and trimmings.

Also, McDonald’s McResource site tells workers not to whine about their low wages and empty stomachs. Don’t worry, be happy, it warns: “Stress hormone levels rise by 15% after ten minutes of complaining.”

Many McDonald’s workers are ignoring that counsel. Like Wal-Mart workers, fast food workers are taking to the streets in strikes and protests. They want their employers, who are wealthy from the sweat of laborers, to share the bounty workers helped create.

The biggest single action by Wal-Mart workers was last Black Friday—that big shopping day after Thanksgiving. Since then, Wal-Mart workers have taken to the streets in increasing numbers across the nation.

Similarly, fast food workers began a wave of strikes last November in New York City, and those protests now have spread to 60 cities.

Participation takes valor from workers who can’t make it paycheck to paycheck. They know striking means risking everything. Many have suffered for demanding decent treatment.

Just last week, the Office of General Counsel of the National Labor Relations Board found merit to allegations that Wal-Mart unlawfully surveilled, threatened, punished or fired workers who engaged in legally protected strikes and protests in 14 states. Resolution for these workers could take years, however.

The protesting workers are asking their employers to pay them living wages. They don’t want to depend on taxpayer aid.

That’s right. Taxpayers prop up the payrolls of the fabulously wealthy Walton family and the highly profitable fast food corporations.

A report issued last month by researchers at Berkeley and other universities, titled “Fast Food, Poverty Wages: The Public Cost of Low-Wage Jobs in the Fast-Food Industry” calculates that the cost to taxpayers in welfare payments, food stamps and other public assistance to the families of fast food workers is more than $10 billion a year.

The researchers found that fast food workers’ families are enrolled in public assistance programs at twice the rate of the overall U.S. workforce.

It’s a similar story at Wal-Mart, where 1.4 million Americans work. A study earlier this year by the U.S. House Committee on Education and the Workforce found that one Wal-Mart Supercenter can cost taxpayers as much as $1.7 million a year in public benefits for low-paid workers. That study is aptly titled, “The Low-Wage Drag on Our Economy: Wal-Mart’s Low Wages and Their Effect on Taxpayers and Economic Growth.”

A Wal-Mart spokesman, Kory Lundberg, tried to put a positive spin on the Thanksgiving food donation bins at the Ohio store. He said the food drive is proof that workers care about each other. That is true. It is workers supporting workers.

Then he added: “This is part of the company’s culture to rally around associates and take care of them when they face extreme hardships.”

That is not true. The Waltons aren’t depositing turkeys and yams in those bins. Those bins are there because the Waltons don’t rally around their associates; the Waltons don’t care that their workers face extreme hardships—hardships that would be avoided if the Waltons paid a living wage.

Wal-Mart workers are planning more protests this week on Black Friday, as many as 1,500 across the country. They are asking for your help, and you can find out how by going to this Working America site. It will be too late to change this year’s Thanksgiving for low-paid workers. But if you take McDonald’s advice to not worry and be happy, you can participate with the belief that your efforts will change next year’s Thanksgiving from bleakness to some semblance of bounty for millions of American workers.