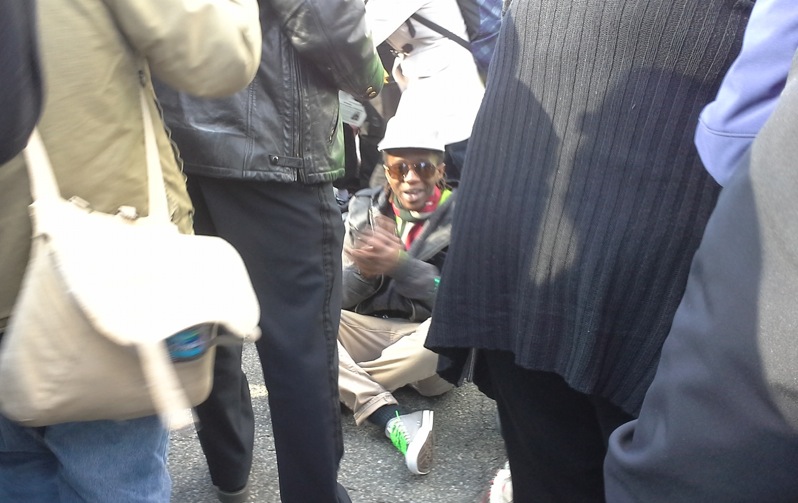 Wal-Mart touts a caring culture. Now, its workers are caring for each other by speaking out.

'When I saw the food bins in Ohio, it made me think, "Employees are not just hungry on Thanksgiving, they’re hungry every day because they’re getting paid low wages," ' says Tiffany Beroid, a worker at a Wal-Mart in Laurel, Md.

“I've come today to represent all the silent Wal-Mart workers that are afraid to stand up for their rights,” Elaine Rozier, a Wal-Mart employee of eight years, told a crowd of about 150 labor activists and community supporters—accompanied by raucous musicians with Occupy Guitarmy and the Rude Mechanical Orchestra—on Friday in Secaucus, N.J., across the street from a well-guarded Wal-Mart and Sam's Club (the wholesale club owned by Wal-Mart and named for the company’s celebrated founder, Sam Walton). “I'm standing up for my rights, my kids, my grandkids, and their kids,” Rozier said.

Perhaps because of the fear she mentioned, Rozier, who comes from Miami, was one of the only identified Wal-Mart employees in the crowd. Along with Mark Bowers and Colby Harris, two Wal-Mart workers from Texas, Rozier traveled to New Jersey for Black Friday, Wal-Mart's biggest retail sales day, to demonstrate to the workers inside the Secaucus store that they, too, could stand up for their rights.

Accompanied by ten supporters, the three workers blocked traffic on the street alongside the Wal-Mart, chanting, singing and clapping until police took them away in handcuffs.

The protest was one of hundreds of Black Friday actions organized by OUR Walmart, a United Food and Commercial Workers-backed group of Wal-Mart workers—including Rozier, Bowers and Harris—that has been putting on strikes, protests, and direct actions at Wal-Mart for over a year in support of better wages, benefits and conditions. The first wave of strikes hit in October of 2012, and on Black Friday of that year, some 400 workers reportedly went on strike at stores around the country.

“Stand up, live better” has become the rallying cry of the movement, a twist on the retail giant's own slogan, “Save money, live better.” On Friday, workers in Secaucus repeatedly echoed the “stand up” line.

OUR Walmart has always focused on preventing Wal-Mart from retaliating against workers for organizing, but after the firings of several strikers this summer, the group has doubled down on the issue. “I'm getting arrested because Wal-Mart has continued to retaliate against the associates who’ve been speaking up,” Harris told In These Times before sitting down in the middle of the street to risk arrest—one of at least 111 protesters arrested in eight cities this Black Friday, according to UFCW. “I was actually fired illegally September 30 for participating in concerted activity over the past year and a half. That's why I'm here today: to call on Wal-Mart to reinstate those who were illegally fired and work with the associates to end poverty wages [and] give us consistency with scheduling and hours.”

Wal-Mart has denied that the firings were illegal, but the National Labor Relations Board disagrees. Last week, the board found evidence that Wal-Mart had in fact violated labor law by retaliating against workers who took action over the past year.

The NLRB ruling added wind to the movement’s sails. As actions heated up over the last week—including strikes and a vigil in front of Wal-Mart's Bentonville, Ark. headquarters—the workers took heart that officials understood what they were going through.

“That was very encouraging, being able to get the NLRB on our side,” says Yvette Brown, a Placerville, Calif., Wal-Mart worker, who was fired, she says, about two weeks after going on an unfair labor practices strike in June. “It's about time, I've been really excited.”

Brown spoke to In These Times by phone from Bentonville. She was one of several workers who stood outside the company's home office demanding to be reinstated in the days leading up to Black Friday. She'd been hired, she said, about two and a half years ago for what she thought was a manager position in the fabrics and crafts department of her store. But, she said, she was told once she started that she was simply a sales associate. “They promised me all these wonderful things, it didn’t seem like it was happening,” she said. Yet found the company’s much-touted open door policy didn't work for her. “Each time I’d address an issue, I felt like I was a nuisance.”

Within a year of getting the job, Brown found out about OUR Walmart. Joining the organization encouraged her to step up and speak out, and in June, she went on strike and traveled to Bentonville for the first time. The trip left her even more empowered: Corporate headquarters, far from intimidating her, made her feel at ease.  “I was really impressed at how small this town was, it kind of reminded me of my hometown, Placerville, how countryish it felt, like a home away from home,” she said. “When I got to home office I felt I expected some bigger, elaborate place.”

That feeling has been part of Wal-Mart's image—the homey, family company that cares for its employees. But it seems like that image and the culture of workers caring for one another that goes along with it are beginning to backfire on Wal-Mart. Brown felt comfortable enough in Bentonville to return once again with a protest sign. And the caring family culture that Wal-Mart prides itself on embarrassed the company recently with the news that a Canton, Ohio, Wal-Mart store had bins out asking associates to donate to those going hungry on Thanksgiving: their coworkers. The company, when confronted with this issue, called it evidence that Wal-Mart employees care about one another, but it also serves as evidence that while the associates might care, their employer seems not to.

“When I saw the food bins in Ohio, it made me think, ‘Employees are not just hungry on Thanksgiving, they’re hungry every day because they’re getting paid low wages,’ ” says Tiffany Beroid, a worker at Wal-Mart in Laurel, Md., who went on her first strike on Tuesday, November 26, as part of the week of actions leading up to Black Friday.

Many of the Wal-Mart workers I've spoken to this week and over the last year note that concern for one another led them to get involved with OUR Walmart. Mark Bowers, who also worked at Wal-Mart in Dallas, Texas for eight years before being fired after going on strike, expressed that sentiment: “Right now I’m here to fight for everybody who has been done wrong. I feel like if I don't fight our next generation of kids will not have a future.”

Beroid took the family culture a step further, bringing her 8-year-old daughter with her as she went on strike. She considers it a great experience for her daughter to be part of a historic moment. “Like she said, when she was protesting, she is the future,” Beroid says.

The future of the Wal-Mart movement remains unclear. In the midst of a week of bad news for Wal-Mart, the company announced that Doug McMillon would replace five-year chief executive Mike Duke. In a press statement, McMillon promised to “create opportunity for our associates.” If the incoming executive is looking for a goodwill gesture, one option would be to honor the workers’ demands for better wages, reinstatement of fired workers, an end to retaliation and more consistent hours.

I asked Beroid what she'd like to say to the company's new CEO, and she replied, “First of all, I would want to thank him for applauding the workers. That was the first time that I've ever heard that, business never applauds us.” But, she continued, she would like him to own up to the company's low wages.

It still seems more likely that Beroid and her colleagues will get a raise if the federal or state governments act to raise the minimum wage—something that, thanks to the growing movement of other low-wage workers taking action at fast-food restaurants and retail outlets around the country, seems ever more possible.

Workers around the country have rallied to the cause of the Wal-Mart and fast-food workers—surrounding the Wal-Mart workers at the Secaucus store were representatives from the Retail Action Project, 99 Pickets and many other workers’ groups from the New York and New Jersey area; seated on either side of Colby Harris as the police closed in were a Boilermaker and a postal worker. While increasing public support doesn't help workers force concessions from the companies they work for, it does build pressure on elected officials—several members of Congress, including Senator Sherrod Brown (D-Ohio) and Rep. Jan Schakowsky (D-Ill.), released a statement supporting the workers. Naquasia LeGrand, a KFC worker from Brooklyn, told the crowd, “It doesn’t make no sense that these companies is making this money off our backs. So now it’s time that we stand up straight and take back what's ours.”

It's hard to measure the success of OUR Walmart in concrete concessions—while there have been none at the national level, some may be happening at the individual stores. But perhaps the very fact that McMillon, the company’s new CEO, is a former hourly associate should be counted as a victory for the workers’ movement. Wal-Mart doesn't appear likely to shower its workers with benefits as its stock price stagnates and its sales shrink, but the company has, however indirectly, acknowledged its weak point.

The workers risking arrest in Secaucus today remain determined to keep fighting, and judging from the size of the cheering crowd, they will continue to have community support.

I asked Harris, who has been with the movement since the early days and went on three separate strikes before his firing, how he thinks OUR Walmart has changed since it began.

He replied, “I feel like it's gotten a lot stronger, a lot of workers have gotten over their fears and decided to join us. The reality is the retaliation is still there, so a lot of workers who would like to speak out still aren't. But through our consistency and us continuing to speak out, eventually those workers will get enough strength and courage to stand with us.”