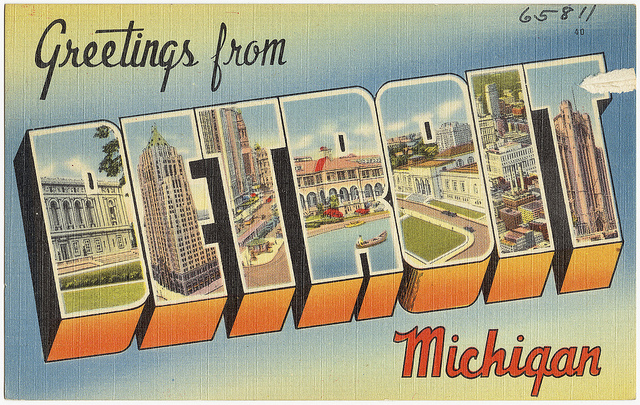 In the wake of Detroit's bankruptcy, many wonder how the city will regain economic stability (Boston Public Library/Flickr/Creative Commons).

Though these questions have mostly been ignored, continuing to ask them can at least highlight the fact that something nefarious is happening right now in the Motor City.

Though they are important, let's be honest: Municipal budget figures can be mind-numbingly boring. Even in high-profile, high-stakes dramas like Detroit's bankruptcy, the sheer flood of numbers can encourage people to simply tune it all out for fear of being further confused.

Thus, in the interest of not putting you to sleep or further perplexing you, here are three painfully simple questions about Detroit's bankruptcy. Though these questions have mostly been ignored, continuing to ask them can at least highlight the fact that something nefarious is happening right now in the Motor City.

1. Why are Detroit officials simultaneously moving to cut municipal workers' pensions while spending hundreds of millions of dollars on a new professional hockey stadium?

Gov. Rick Snyder, R-Mich., and his appointed emergency manager Kevyn Orr are pleading poverty to justify cuts to the average Detroit municipal worker's $19,000-a-year pension. Yet, they are also saying they have plenty of money available to continue a planned $285 million taxpayer subsidy for the construction of a new hockey stadium for the Red Wings. Economic data over the years suggest that that paying pension benefits is often a far more powerful tool for economic stimulus than financing stadium subsidies. That's because pensions reliably pump resources into a local economy while stadium subsidies often end up a net loss for taxpayers. So why is Detroit prioritizing stadiums over pensions?

2. Why are municipal employees being blamed for Detroit's woes when data prove they had little to do with the city's fiscal problems?

In an extensive report for the think tank Demos, former Goldman Sachs investment banker Wallace Turbeville shows that Detroit officials' current “focus on cutting retiree benefits and reducing the city’s long-term liabilities to address the crisis (is) inappropriate and, in important ways, not rooted in fact.” That's because, as Turbeville documents, “Detroit’s bankruptcy was primarily caused by a severe decline in revenue and exacerbated by complicated Wall Street deals that put its ability to pay its expenses at greater risk.” Yet, despite these facts, Detroit's municipal employees are primarily being blamed by politicians and pundits for causing the crisis. Why?

3. If Michigan is so strapped for cash, why is Gov. Snyder almost doubling the salaries of his top officials?

The Detroit Free Press reports that while exploring pension cuts, Snyder's administration “quietly increased the salaries of its top investment officials in the Treasury Department by more than 80 percent.” As just two examples, Snyder's move means that a pair of his top aides will now be paid an annual salary of $333,000 and $233,000, respectively. If as Snyder's administration claims, “there's not enough money” for pensioners, how is there enough money to pay Snyder's political appointees those kind of salaries?

The fact that these simple questions have been mostly excluded from the national discussion about Detroit is proof that so much of what passes for “news” these days is ideology and opinion. In this particular case, the pervasive ideology in elite political and media circles is a hatred of the public sector and the widespread opinion in those circles is that municipal employees are lazy leeches who deserve to be punished. And so for the most part, these basic questions still go unasked–and unanswered.

But just because these queries are being ignored, doesn't mean they should be. Michigan taxpayers and retirees have a right to some basic answers. The same goes for taxpayers and retirees in the next city that tries to follow Detroit's current path–and yes, that will almost certainly happen. The class war is clearly going local. The more the questions are raised right now, the better the chance for the middle class to survive.

Reagan Lives On in Biden