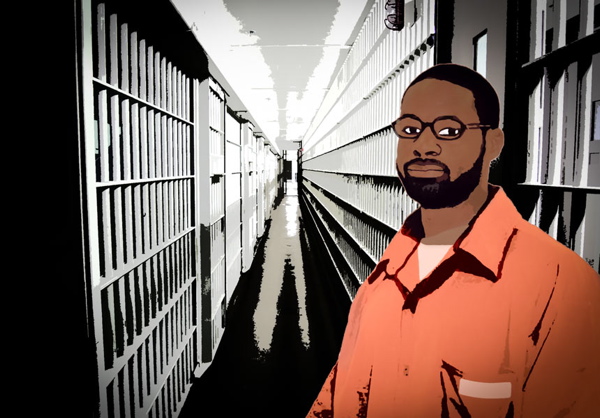 Stacey Torrance was only 14 years old when he was sentenced to life in prison without the possibility of parole under Pennsylvania's strict mandatory sentencing laws. (Rachel K. Dooley)

Could a recent Supreme Court decision give juvenile lifers a second chance?

Pennsylvania’s response seemed like the blessing Torrance had prayed for since the day he was locked up. More than 20 years have passed since he was charged with murder. Under the new rules, he should be up for parole, right? Wrong.

When Stacey Torrance was sentenced to life in prison without the possibility of parole in a Philadelphia courtroom in 1988, the sentence seemed somewhat unusual. First of all, life in prison is typically reserved for perpetrators of violent crime. And while someone had been killed during the chain of events that landed Torrance in front of a judge, Torrance hadn’t planned or participated in the killing. Torrance had agreed to lure Alexander Porter, the brother of a friend, to an older acquaintance who planned to steal Porter’s keys and then burgle the home of Porter’s father. But instead of simply stealing Porter’s keys, the older acquaintance, along with an accomplice Torrance had never met, tied him up and threw him into the trunk of their car. Torrance, too, was tied up–something he had not agreed to. Torrance was then taken to his mother’s home and released. Porter was driven away and eventually killed by Torrance’s older acquaintances, who were later tried for first-degree murder and eventually sentenced to a lifetime in prison.

Secondly, Torrance had never been in trouble with the law before. And a life sentence for a non-violent first offense tends to raise eyebrows—particularly when the offender didn’t pull a trigger.

But most importantly, Torrance was only 14 years old in 1988. If he had been convicted in another state, he might have been released when he turned 21, back in 1995. But Torrance was convicted of second-degree murder and, under Pennsylvania’s mandatory sentencing laws, the judge had no choice but to hand down a life sentence. So Torrance spent the year of his 21st birthday in a prison cell within Pennsylvania’s Department of Corrections. He remains incarcerated to this day.

But if an appeal to the U.S. Supreme Court gains traction, there’s a chance he might eventually become a free man.

Pennsylvania has sentenced more juveniles to life in prison than any other state in the country. Out of the 2,500 or so prisoners sentenced to life without parole before turning 18 in the United States, about 500 are in Pennsylvania. Michigan and Louisiana are competing for second place with about 350, and Florida and California follow with about 250 each. Missouri and Illinois both have about 100. The rest are scattered around the country in states that tend to avoid sentences of juvenile life without parole—or JLWOP—in all but the most heinous crimes. A handful of states have no JLWOP prisoners.

For years, none of that mattered to Stacey Torrance, or any of the other juvenile lifers in his situation. They were behind bars until death. But last year, the Supreme Court ruled 5–4 in Miller v. Alabama that mandatory life-without-parole sentences for juveniles were unconstitutional. Justice Elena Kagan, in her majority opinion, explained the obvious: Kids are affected by “immaturity, impetuosity, and failure to appreciate risks and consequences,” which makes it unfair, cruel and unusual to send them to prison for life.

State legislators went to work. Laws changed. In Louisiana, for example, juvenile lifers are now required to serve a minimum of 35 years behind bars before their first parole hearing. JLWOP is still an option in Louisiana—just not a mandatory one. In California, JLWOP is no longer an option at all; a parole review is required after juvenile lifers have served 15, 20 and 25 years behind bars. In Pennsylvania, those convicted of second-degree murder before the age of 15—such as Stacey Torrance—must serve 20 years before their first parole hearing; those charged between ages of 15 and 17 must serve 30 years.

After Miller, juvenile lifers had hope. In a paper flood, they filed new direct appeals to state and federal courts, and filed for resentencing under laws such as Pennsylvania’s Post Conviction Relief Act (PCRA), which allows for an additional inquiry after Pennsylvania’s Superior Court has denied a prisoner’s direct appeal.

For Torrance, Pennsylvania’s response to Miller seemed like the blessing he had prayed for since the day he was locked up. More than 20 years have passed since he was charged with murder. Under the new rules, he should be up for parole, right?

Living in the past

When the Supreme Court ruled in Miller v. Alabama, it failed to address one major question: What should be done about the 2,500 JLWOP sentences already being served? That was left to the states to determine on their own.

On October 30, 2013, the Pennsylvania Supreme Court made a decision in the case of Ian Cunningham, a 31-year-old prisoner serving life in prison for a murder he committed at 17. The court determined that his appeal “must be decided under the law as it stood at the time his conviction became final in 2005.” That meant the Miller decision would effectively be ignored in his case. He would remain a prisoner serving life without parole. In other words, Pennsylvania’s highest court decided Miller would only apply to cases going forward, not cases that had already been resolved.

This decision didn’t affect just Cunningham. All but about 15 or so JLWOP sentences in Pennsylvania would remain as they were—sentences of life in prison without the possibility of parole.

For people such as Bobbi Jamriska, Pennsylvania’s director of the National Organization of Victims of Juvenile Lifers, Pennsylvania’s JLWOP decision was a win. In 1993, Jamriska’s pregnant sister was killed by a 16-year-old who is serving a life-without parole sentence.

On the other side of the argument are people such as Jeffrey Shook, an associate professor of social work at the University of Pittsburgh who studies the transfer of juveniles to the adult criminal justice system. “The spirit of Miller was that kids are different and they shouldn’t be held to these mandatory sentences,” he says. Pennsylvania’s decision, he says, “creates two arbitrary classes of offenders based simply upon when a decision was handed down by a judge. That’s not a solid basis for justice.”

Pennsylvania wasn’t the only state to rule out retroactivity. Arkansas, Minnesota, Texas, Wyoming and Florida also decided to leave old JLWOP cases alone. But it’s by no means a nationwide consensus. Courts in Illinois, Iowa, California, Delaware and North Carolina have made the opposite decision—that Miller should be fully retroactive, that old sentences should be reconsidered.

For Stacey Torrance—and the more than 2,000 juvenile lifers nationwide—the lack of consistency in how Miller was interpreted could eventually be a good thing. Bradley Bridge, an attorney with the Defender Association of Philadelphia, told In These Times that he plans to work with the Juvenile Law Center in Philadelphia to appeal the Cunningham decision to the U.S. Supreme Court by the end of January 2014. Bridge believes that the lack of national consensus on the retroactivity issue will compel the nation’s highest court to step in again.

“This is an important issue that [the nine justices of the U.S. Supreme Court] do care about,” he says, noting that the Supreme Court has made rulings in three separate cases over the last eight years dealing with how juveniles should be sentenced in court. “So they’re very interested in the topic, and the topic has a wide variety of resolutions all over the country. … Which is why I think there’s a reasonable chance that they will hear the case.”

Shook puts it a little more simply. “This is not over,” he says. “This is by no means the end of the story.”

Matt Stroud is a former Innocence Network investigator who now covers the U.S. legal system, in all its glory and ugliness, as a freelance journalist. Follow him on Twitter @ssttrroouudd. Email him at stroudjournalism