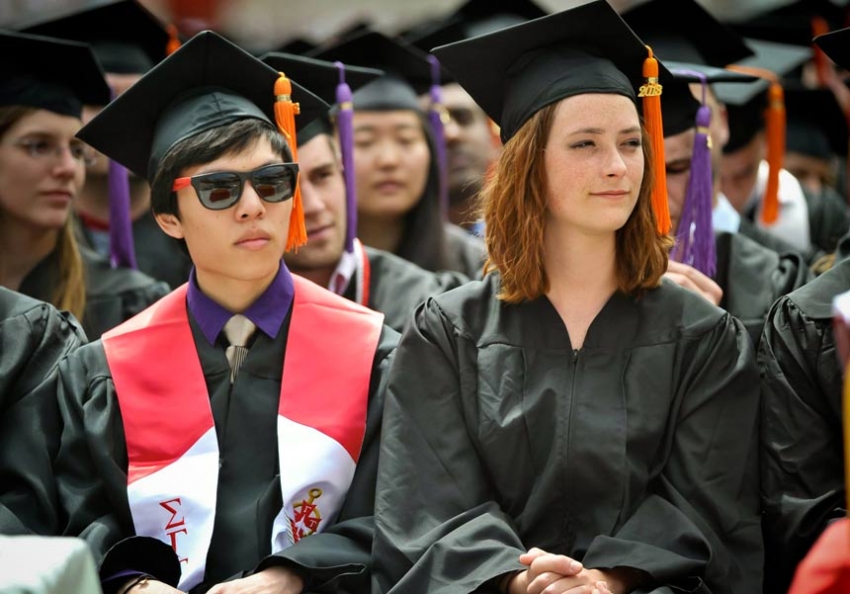 Graduating students at commencement ceremony at Ohio State University on May 5, 2013.

The Right wants us to think higher education has no value.

'Public colleges and universities nationwide have seen significant funding cuts over the past five years, and while the recession is usually blamed, the Right keeps the fiscal screws tight by cutting taxes on the wealthy and corporations.'

Among the many visionary goals of our nation’s right wing—impoverish older people, starve the poor, deny climate change, outlaw abortion and contraception, eliminate healthcare for millions—few are more foundational than defunding education in general and higher education in particular. Public colleges and universities nationwide have seen significant funding cuts over the past five years, and while the recession is usually blamed, the Right keeps the fiscal screws tight by cutting taxes on the wealthy and corporations. Here in Michigan, in Republican Gov. Rick Snyder’s first budget, there was a 15 percent cut in state aid to universities and a $1.8 billion tax cut for businesses. This equals a win-win for the Right: Keep the fat cats in your corner, and constrain the opportunity for young people to learn a host of things that might, well, make them interrogate right-wing policies. The Pew Research Center and others have found that lower income and less-educated whites are becoming more likely to vote Republican than Democrat, with 54 percent of those without a college degree identifying as Republican in 2012; only 37 percent identified as Democratic, so the gap is, well, quite wide.

And here’s the ideological bonus: Public universities, clobbered by defunding, raise tuition. Then conservative pundits like S.E. Cupp can scream about the outrageous unaffordability (and elitism, of course) of a college degree and claim that it’s money down a rat hole. As she put it, colleges are “not meeting the demand of manufacturers and employers who want people who can’t just, you know, read Freud and Nietzsche … but who can actually read a business plan.” She’s hardly alone— stories asking “Is College Worth It?” are everywhere now. Few put two and two together: that the government cuts have to be made up somehow.

The recent assaults on the value of a college degree (coupled with the shameful student loan scandal) have borne fruit: According to a College Board and National Journal poll, 46 percent of respondents believe a college degree isn’t necessary for success, while only 37 percent said so in the previous year’s poll. Here is another victory of opinion over fact. Even with the high cost of college, graduates make an average $365,000 more during their lifetimes—after you subtract all the costs of going to school—than their counterparts with only a high school degree. At the University of Michigan, where I teach, a recent calculation showed that after accounting for tuition and fees, a Michigan grad made $901,400 more than a non-college graduate.

Or take California as an example. Disinvestment has been so massive—9 percent over the past ten years—that according to the Public Policy Institute of California, the state now spends more on its prison system than on its public universities. With few choices but to raise tuition, University of California and California State schools have seen enrollments drop by one-fifth over the past five years. If the trend persists, the state faces a significant drop in college graduates just at the time when more and more jobs—some estimate as many as 60 percent—will require some post-secondary education.

But this is also part of the problem: the monetizing of higher education, as if the potential increase in wages is the most important metric of going to college. The liberal arts are especially under siege: Why study literature or history, anyway? Parents ask, “How will this degree help my kid get a job?” Of course they want a “return on investment.” But a liberal arts education, given the new work environment of the 21st century, when people will have multiple career trajectories during their lives, may be more crucial than ever. It trains students to probe and ask questions; to look at more than one side of an argument; to open their hearts and minds to other worldviews; to do research to try to figure out the best solutions to problems; to develop analytical thinking, which never goes out of style; to write and speak clearly and forcefully; to accept failure as part of the process of success; and to be flexible in adapting to new work routines and challenges. This habit of mind—adaptive, open to new ideas and challenges, accepting of difference, understanding of history—is exactly what young people need to succeed now more than ever, and precisely what the defunders of higher education do not want young people to ever acquire.