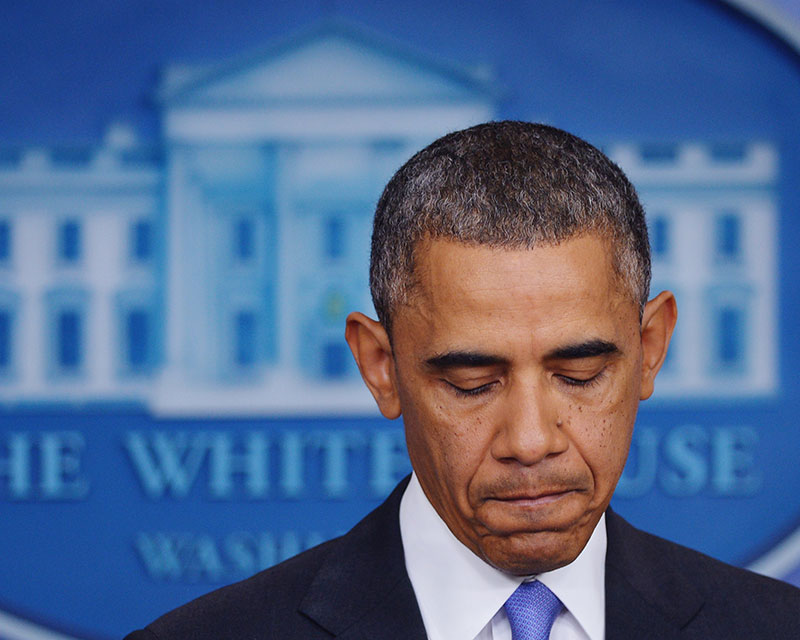 Barack Obama pauses as he speaks on the Affordable Care Act in the Brady Press Briefing Room of the White House on November 14, 2013. (Photo by Mandel Ngan/AFP/Getty Images, Inc.)

How Obama and the Democrats failed to defend the universal right to healthcare.

The president’s (and the ACA’s) declining popularity underscores growing public doubts about Democrats’ willingness to stand and fight.

Outside observers watching the brouhaha over the Affordable Care Act’s website malfunction might well have assumed that the GOP, not the Democratic Party, is the governing party. After all, GOP zealots turned the long-overdue launch of national healthcare—a momentous achievement for the country—into a phony crisis about a website malfunction. What’s more, the national media obliged by allotting more time to fulminations about the website than interrogating the ideologues who oppose healthcare equity. While a few progressive commentators pushed back, the governing party went into retreat.

The GOP fury over the website’s issues was rooted not in any newfound interest in the ACA’s success, but in a long-held opposition to healthcare as a “right.” In a telling moment in the 2008 presidential debates, Obama asserted a right to healthcare, and McCain rejected it. The problem is that Democrats have handled this malevolence as normal political discourse, rather than the outlier worldview it is. Republicans are the only major political party in the industrialized world still fighting national healthcare. The failure of Democrats to turn this retrograde worldview into a national scandal explains why the GOP maintains an undeserved death grip on the healthcare conversation.

But Democrats have not only failed to confront Republicans. They have also reinforced conservative mantras that undermine their professed agenda by mimicking the anti-government evangelism and uncritical exaltation of markets, most memorably in Bill Clinton’s famous 1996 declaration that “the era of big government is over.” Democrats also ceded political space to GOP fanatics during the Affordable Care Act’s conception in 2009. Instead of contesting Tea Party fearmongering around Obamacare, Democrats offered concessions—first by excluding single-payer healthcare from consideration, then jettisoning the public option. The president’s (and the ACA’s) declining popularity underscores growing public doubts about Democrats’ willingness to stand and fight.

Rather than reassert the purpose of his health plan in the face of post-launch criticism, Obama apologized—repeatedly. His team promised that the improved ACA website would operate with “private-sector velocity and effectiveness.” Apparently they couldn’t find any examples of government “velocity and effectiveness.” They clearly didn’t consider the U.S. air traffic control system, which wondrously handles 64 million takeoffs and landings each year (Air Force One included) and oversees the safest skies in the world. Nor the Social Security Administration, which has never missed a payment to its 57,469,232 beneficiaries. By contrast, in the private sector last year, a security breach at Target Corp compromised the credit card data of 70 million customers, and a battery malfunction grounded all Dreamliner jets—built by that icon of capitalism, Boeing—but no one blamed free enterprise.

Instead of defusing a phony crisis, the Obama administration’s gratuitous paean to “the private sector” only emboldened foes. On Fox News, archconservative Charles Krauthammer denounced the hypocrisy of conceding private-sector superiority while trying to nationalize American medicine.

Fast forward to the ACA rollout. Obama lets right-wing ideologues exploit a website malfunction. He tolerates feigned GOP outrage over cancelled health plans, although Republicans didn’t protest the turnover of more than 50 percent of individual plans each year under the previous system. He begs unscrupulous insurers to reinstate junk policies, when he could have turned the tables on them and revived (yes) the public option by absorbing the cancellation victims into a federal plan like Medicare.

Progressive disillusionment with Democrats has simmered for decades. As progressives push for more populist candidates, Democrats must choose a path. Will they confront corporate power and reassert the rightful place of government to facilitate economic justice and equity? There are signs of progressive renewal, including the inspiring struggles of restaurant and retail workers, campaigns to raise the minimum wage, election outcomes in New York and Seattle, growing opposition to war and a rising educational justice movement. Will Democrats embrace the demands of a resurgent progressive movement, or will they continue to indulge their corporatist impulses—and donors?