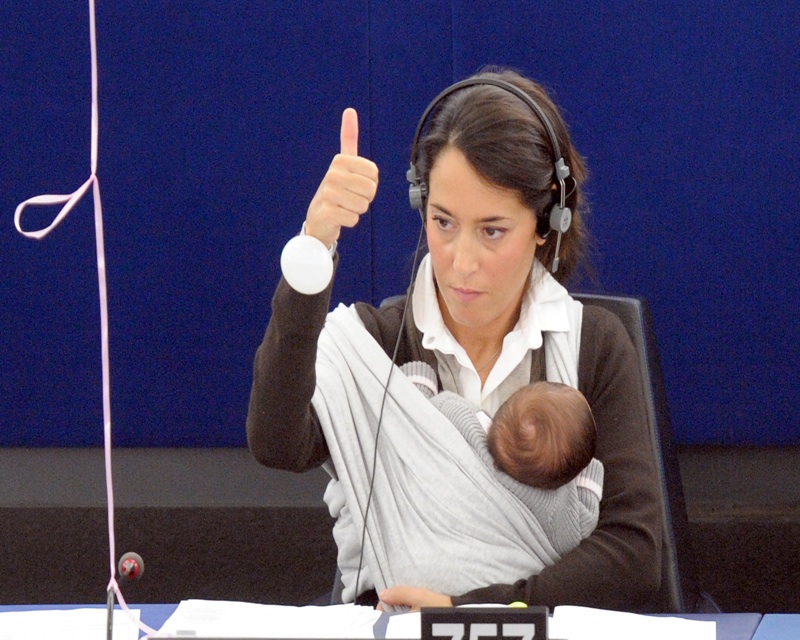 On October 20, 2010, European Deputy Licia Ronzulli voted in favor of increasing maternity leave in Europe from 14 to 20 weeks. The U.S. is the only industrialized country not to mandate paid maternity leave (Frederick Florin/AFP/Getty).

Why Paid Sick Leave Is Good For Business

The standard public defense of this sad reality is a domino-theory argument. Corporate leaders and the conservative politicians they own typically argue that paid leave mandates will automatically raise costs and that those costs will consequently prompt job and wage cuts that hurt the very workers the mandates aim to help. This shrewd bit of spin reimagines the corporate class's desire to exploit workers as fight-for-the-little guy altruism.

As political demagoguery, the line has been wildly successful in not only helping defeat paid leave proposals but also in justifying laws in 10 states that preemptively prohibit local communities from enacting such mandates. The trouble, though, is that mandate opponents’ underlying economic argument is not substantiated by the data.

In the past, it may have been easy to write these findings off by saying they were just speculative or by claiming that other countries' success with employer mandates is irrelevant to America. But as of this month, even those facile misdirects have been debunked, as powerful new data emerges from Connecticut, a state that mandated paid sick days back in 2011.

In a new study surveying 251 Connecticut firms, researchers from the Center for Economic and Policy Research and the City University of New York showed that “a large majority of employers reported that the law did not affect business operations and that they had no or only small increases in costs … employers saw decreases in the spread of illnesses and increases in morale.” In all, the study found that today “over three-fourths of (Connecticut) employers reported that they were very supportive or somewhat supportive of the paid sick days law.”

It should go without saying that denying workers any guaranteed leave is inhumane and the opposite of “pro-family.” With roughly 40 million American workers having no paid sick leave, with only 11 percent of private-sector workers having access to paid family leave, and with millions getting no paid vacation, there is a strong moral argument for lawmakers to enact guarantees for sick, maternity and vacation leave. Indeed, just like a basic sense of human decency was the impetus for labor, wage and workplace safety laws, so, too, should human rights be the basis for paid leave mandates.

But even if you are a cold-hearted misanthrope, a greed-driven executive or a corrupt politician ignoring the moral case for reform, the concrete numbers from Connecticut prove that paid leave mandates make macroeconomic sense.

In practice, that means such mandates do not conflict with capitalist objectives or American culture’s worship of the almighty dollar. It means that paid-leave mandates are both moral necessities and smart economic policies. It also means they are long overdue.