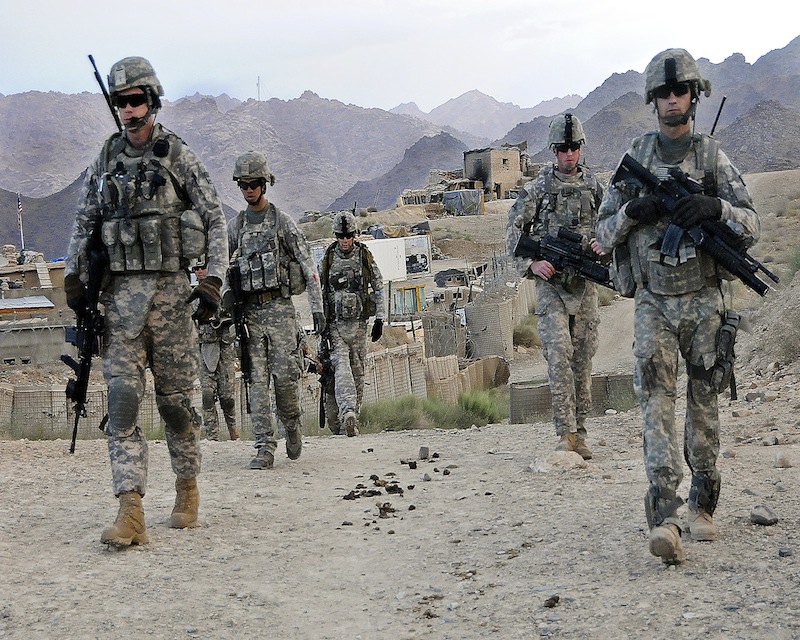 Asked, 'Which country do you think is the greatest threat to peace in the world today?' international respondents overwhelmingly chose the United States, with three times as many votes as second-place Pakistan. (Staff Sgt. William Tremblay / U.S. Army / Creative Commons)

The Greatest Threat to World Peace

The United States polls higher than Pakistan, Iran and China as a perceived menace to peace.

As the year 2013 drew to an end, the BBC reported on the results of the WIN/Gallup International poll on the question: “Which country do you think is the greatest threat to peace in the world today?”

The United States was the champion by a substantial margin, winning three times the votes of second-place Pakistan.

By contrast, the debate in American scholarly and media circles is about whether Iran can be contained, and whether the huge NSA surveillance system is needed to protect U.S. security.

In view of the poll, it would seem that there are more pertinent questions: Can the United States be contained and other nations secured in the face of the U.S. threat?

In some parts of the world the United States ranks even higher as a perceived menace to world peace, notably in the Middle East, where overwhelming majorities regard the U.S. and its close ally Israel as the major threats they face, not the U.S.-Israeli favorite: Iran.

Few Latin Americans are likely to question the judgment of Cuban nationalist hero José Martí, who wrote in 1894, “The further they draw away from the United States, the freer and more prosperous the [Latin] American people will be.”

Martí's judgment has been confirmed in recent years, once again by an analysis of poverty by the U.N. Economic Commission for Latin America and the Caribbean, released last month.

The U.N. report shows that far-reaching reforms have sharply reduced poverty in Brazil, Uruguay, Venezuela and some other countries where U.S. influence is slight, but that it remains abysmal in others—namely, those that have long been under U.S. domination, like Guatemala and Honduras. Even in relatively wealthy Mexico, under the umbrella of the North American Free Trade Agreement, poverty is severe, with 1 million added to the numbers of the poor in 2013.

Sometimes the reasons for the world's concerns are obliquely recognized in the United States, as when former CIA director Michael Hayden, discussing Obama's drone murder campaign, conceded that “Right now, there isn't a government on the planet that agrees with our legal rationale for these operations, except for Afghanistan and maybe Israel.”

A normal country would be concerned by how it is viewed in the world. Certainly that would be true of a country committed to “a decent respect to the opinions of mankind,” to quote the Founding Fathers. But the United States is far from a normal country. It has had the most powerful economy in the world for a century, and has had no real challenge to its global hegemony since World War II, despite some decline, partly self-administered.

The U.S., conscious of “soft power,” undertakes major campaigns of “public diplomacy” (aka propaganda) to create a favorable image, sometimes accompanied by worthwhile policies that are welcomed. But when the world persists in believing that the United States is by far the greatest threat to peace, the American press scarcely reports the fact.

A current example can be seen in the laments about the escalating Sunni-Shiite conflict that is tearing apart the Middle East, particularly in Iraq and Syria. The prevailing theme of U.S. commentary is that this strife is a terrible consequence of the withdrawal of American force from the region—a lesson in the dangers of “isolationism.”

The opposite is more nearly correct. The roots of the conflict within Islam are many and varied, but it cannot be seriously denied that the split was significantly exacerbated by the American- and British-led invasion of Iraq. And it cannot be too often repeated that aggression was defined at the Nuremberg Trials as “the supreme international crime,” differing from others in that it encompasses all the evil that follows, including the current catastrophe.

A remarkable illustration of this rapid inversion of history is the American reaction to the current atrocities in Fallujah. The dominant theme is the pain about the sacrifices, in vain, of the American soldiers who fought and died to liberate Fallujah. A look at the news reports of the U.S. assaults on Fallujah in 2004 quickly reveals that these were among the most vicious and disgraceful war crimes of the aggression.

The death of Nelson Mandela provides another occasion for reflection on the remarkable impact of what has been called “historical engineering”: reshaping the facts of history to serve the needs of power.

When Mandela at last obtained his freedom, he declared that “During all my years in prison, Cuba was an inspiration and Fidel Castro a tower of strength. … [Cuban victories] destroyed the myth of the invincibility of the white oppressor [and] inspired the fighting masses of South Africa ….a turning point for the liberation of our continent—and of my people—from the scourge of apartheid. … What other country can point to a record of greater selflessness than Cuba has displayed in its relations to Africa?”

Today the names of Cubans who died defending Angola from U.S.-backed South African aggression, defying American demands that they leave the country, are inscribed on the “Wall of Names” in Pretoria's Freedom Park. And the thousands of Cuban aid workers who sustained Angola, largely at Cuban expense, are also not forgotten.

The U.S.-approved version is quite different. From the first days after South Africa agreed to withdraw from illegally occupied Namibia in 1988, paving the way for the end of apartheid, the outcome was hailed by the Wall Street Journal as a “splendid achievement” of American diplomacy, “one of the most significant foreign policy achievements of the Reagan administration.”

The reasons why Mandela and South Africans perceive a radically different picture are spelled out in Piero Gleijeses' masterful scholarly inquiry Visions of Freedom: Havana, Washington, Pretoria, and the Struggle for Southern Africa, 1976-1991.

As Gleijeses convincingly demonstrates, South Africa's aggression and terrorism in Angola and its occupation of Namibia were ended by “Cuban military might” accompanied by “fierce black resistance” within South Africa and the courage of Namibian guerrillas. The Namibian liberation forces easily won fair elections as soon as these were possible. Similarly, in elections in Angola, the Cuban-backed government prevailed—while the United States continued to support vicious opposition terrorists there even after South Africa was compelled to back away.

To the end, the Reaganites remained virtually alone in their strong support for the apartheid regime and its murderous depredations in neighboring countries. Though these shameful episodes may be wiped out of internal U.S. history, others are likely to understand Mandela's words.

In these and all too many other cases, supreme power does provide protection against reality—to a point.