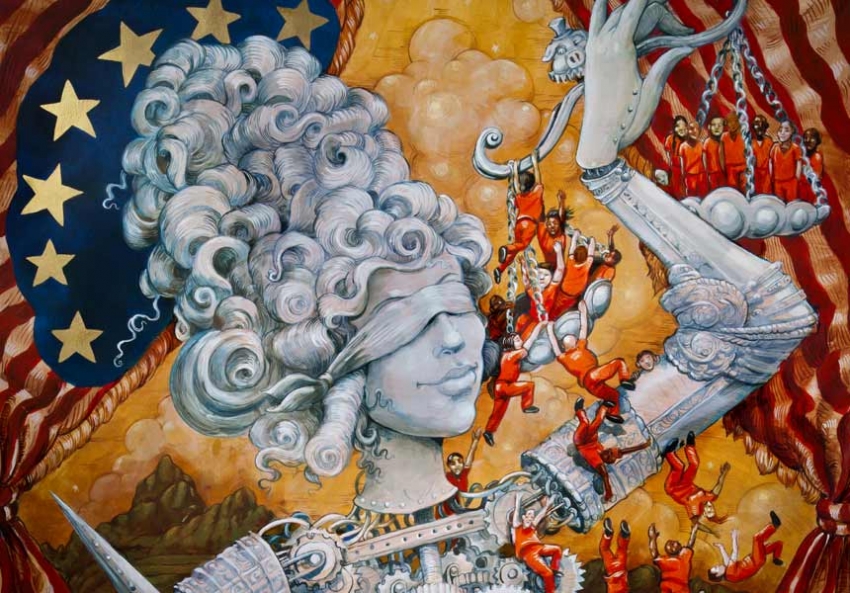 Matt Taibbi’s new book, The Divide, illuminates the corruption in our courtrooms.

Matt Taibbi’s The Divide: American Injustice in the Age of the Wealth Gap is a book about what happens in American courtrooms. Immigrants are deported for traffic violations. Lawyers retained by relatively honest billionaires to defend themselves against attacks from more classically psychotic billionaires are treated by judges with a contempt typically reserved for telemarketers. Wrongful termination lawsuits filed by corporate whistleblowers are thrown out. Bail gets set just high enough to feed prison contractors hordes of accused loiterers, and just low enough to ensure bail bondsmen won’t take the business. Day after day, megabanks win the legal authority to repossess the car or house or bank account of this or that alleged debtor on the basis of her failure to show up in court to answer a summons she never received, because in lieu of actually delivering that summons, the megabank paid some bucket shop four dollars to produce a signed affidavit swearing one of its employees had physically delivered it, while in fact depositing it and thousands like it in a dumpster, a technique known in the business as “sewer service.”

And day after day, five o’ clock rolls around and thousands of alleged jaywalkers, obstructors of pedestrian traffic and open-container possessors are instructed to show up again next month because the arresting officer was too preoccupied with nabbing fresh loiterers to show up to court that day, or because there are simply too many defendants—50,000 marijuana possession cases, 80,000 disorderly conduct cases and 140,000 open container cases a year in New York City alone. Cases rarely go to trial: Innocent 99 percenters admit guilt, and guilty financial crime syndicates shell out millions for the privilege of admitting nothing.

I visited one such courtroom myself last July, after $100 parking tickets started appearing on my car window every other night or so, for the alleged infraction of “failure to secure D.C. tags.” I collected 11 before I finally found a free day to haul myself into a courtroom to explain: My car was not registered in D.C. because I didn’t live in D.C.; I just happened to work at a restaurant in D.C. that closed after the metro stopped running.

“Why did you allow so many tickets to accumulate before disputing them?” the judge wanted to know.

“Well, I had work, and since ticketing people for failure to register their cars in states in which they do not actually reside seemed to clearly be an illegal racket I wanted to contest in person,” I said.

“What you refer to as an illegal racket,” he replied, “is the broadly recognized power of the state to tax its citizens.”

Taibbi never quite articulates this, but virtually all the judges presiding over the bureaucratic atrocities described in the book seem to view themselves fundamentally as tax collectors. “Get your wallets ready! We take Visa and MasterCard!” one judge ghoulishly announces before a room filled with public urinators and sidewalk bicyclists. Another upholds California’s subjection of food-stamp applicants to terrifying unannounced searches by the welfare-fraud Gestapo on the grounds that the public “interest in ensuring the aid provided from tax dollars reaches its proper and intended recipients” trumps the Fourth Amendment. Undocumented immigrants in particular are viewed as what one lawyer calls “walking ATM machines”; one single mom in Los Angeles named Natividad Felix finally catches a “break” when a judge reduces her $1,700 fine for driving without a license to $500—plus 170 hours of community service.

In 2011, one federal judge, writing in the Michigan Bar Journal, described the decline of the American judiciary into a modern version of the Roman Empire “tax farming” bureaucracy, wherein judges have been “appointed [as] revenue agents” charged with extracting state funds “from people in no position to complain”—all so legislators across the nation can eternally and “speciously pledge no new taxes.” But why do so few judges reject this degradation of the profession?

Taibbi doesn’t really explore how the administration of justice came to be so thoroughly dominated by individuals whose apparent absence of any basic concept of the word makes Judge Judy look like Louis Brandeis. This mystery is at once the strength and the ultimate limitation of The Divide. He spends upwards of 10 pages documenting the hell into which the (already miserable) life of Natividad descended during the three months in which, on top of her evening job as a cook at a homeless shelter, she woke up at 5 a.m. every morning to ferry her six children to school before cleaning toilets as part of her court-mandated community service. After that account, no one really has the patience to hear out the nameless judge’s side of the story, and I frankly don’t give a damn.

But in failing to interrogate judicial cowardice, Taibbi neglects to actually nail what he’s hitting upon. For better and worse, the term “neoliberalism” makes no appearance in The Divide, enabling Taibbi to exhaustively chronicle the grotesque hypocrisies he sees without examining the tyrannical Mother Hypocrisy governing all this miscarriage of justice.

Taibbi misses the fact that the criminalization of poverty he finds so maddening is just a subset of a broader criminalization of honesty itself. If that sounds hyperbolic, ask yourself what the First Amendment has done for “truth” lately. We all know how effectively it has been deployed to protect shadowy right-wing propagandists and catastrophically mendacious securities- ratings agencies, but somehow the free speech rights of whistleblowers are invariably trumped by the higher legal protections afforded to intellectual property, trade secrets, non-disclosure agreements and national security.

At this point, even the least conspiracy-minded observer understands that this metamorphosis happened neither by accident nor overnight. For more than six decades now, the Chicago-based cognitive coup plotters who came up with the market fundamentalism we generally know as mainstream macroeconomics have been painstakingly inculcating legal rhetoric and practice with the same theories. The preeminent legal scholars of our time have written shelves full of books advancing the arguments that, inter alia: free markets make corporate monopolies impossible, insider trading makes markets freer, the gravest threat plaguing the American justice system is good intentions, etc.

Together, these ideas comprise the “law and economics” movement, a subsidiary of the cognitive dissonance dissemination racket that is neoliberalism: the fuzzy notion that “the market” is always right and that anyone who claims otherwise is just jealous. Social justice is a “mirage,” neoliberalism’s founding father Friedrich Hayek declared in Law, Legislation and Liberty, fully aware that the modifier “social” was both legally and practically meaningless.

Thus, law and economics scholars formally advise justice administrators, often in the context of cushy junkets, to grapple with the system's essential duplicity via such concepts as the “Coase theorem”—so named after the late University of Chicago law professor and Nobel laureate Ronald H. Coase—whose essential postulate can basically be summarized as “if Plaintiff A has his act together sufficiently to sue Corporate Malefactor B, Plaintiff A can negotiate a more ‘efficient’ compromise with Corporate Malefactor B behind closed doors without involving a jury.”

And so when a bank loots billions of dollars from the bank it’s acquiring, the judge accepts the argument that the theft merely reflected a change in market forces around the deal. And when a kung fu instructor and a founder of a major hedge fund hear the same tip about an upcoming deal and illegally load up on stock, the Securities and Exchange Commission charges the kung fu instructor with insider trading and fires the enforcement officer whose investigation of the hedge fund kingpin begins to point to the then-CEO of Morgan Stanley.

And when an earnest young computer programmer decides to leak a cache of surveillance data in the name of patriotism, he stays alive thanks in part to a curious decision to cede control of much of the information to a media venture, First Look Media, financed exclusively by the billionaire Pierre Omidyar, the founding chairman of eBay. EBay, in turn, owns Paypal, the company that worked with the Justice Department to prosecute programmers who crashed its servers in 2010 in retaliation for its decision to cut off Wikileaks’ PayPal accounts.

First Look just poached Matt Taibbi away from Rolling Stone. I hope this is a good thing. I know the almighty market could give two shits what I think.

Moe Tkacik is an embittered waitress with two young sons in Washington, D.C.