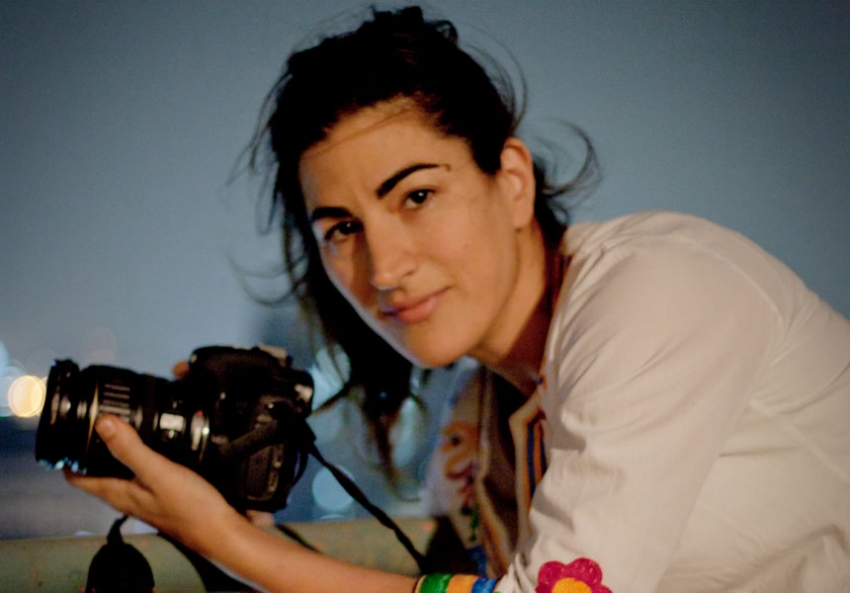 The Revolution Will Be Filmed

Jehane Noujaim, director of Oscar-nominated documentary The Square, on the challenges of shooting a revolution-in-progress.

'Our characters are still deeply optimistic--they wouldn't be struggling for change if they didn't believe there was a hopeful future.'

The Square is a “you are there” film about the Egyptian revolution that, with its vérité footage of tear gas and barricades, puts viewers right in the thick of the upheaval. During filming, The Square ’s director, Jehane Noujaim, was caught in the violent conflicts between protesters and the Egyptian armed forces, and was arrested by Egyptian police. But for Noujaim, who was born to an American mother and an Egyptian father and grew up in Egypt, it was vital to capture the intimate danger of the revolution on film.

The Square premiered at the 2013 Sundance Film Festival, won the Toronto International Film Festival’s documentary People’s Choice Award and received an Oscar nomination for Best Documentary Feature. In These Times spoke with Noujaim in February at the Beverly Hills offices of Netflix, which is now distributing The Square in 47 countries.

The on-the-go filmmaker, who quipped that she now lives “in a suitcase and airplane between Cairo and New York City,” spoke about Egypt’s political situation, the wave of global mass uprisings and what’s next for her as a filmmaker.

Did you fear for your life while shooting The Square?

If you’d asked me a few years ago whether I’d be teargassed while making this film, I would have said you were crazy. But we learned a sort of fearlessness from our characters. When you’re surrounded by people who are willing to put everything on the line for what they believe in, and you’re dedicating yourself to giving their story some kind of platform, your fear disappears. My parents still think I’m crazy.

We were also with people, though, who were very street-smart. Every time I’d get into a dangerous situation, Ahmed [Hassan, a revolutionary who is featured prominently in The Square] would appear from out of nowhere and manage to get me out. In that way, I feel like we were very safe. Although if you see the footage it doesn’t look like it was a very safe situation. [Laughs]

Jodie Evans, who has produced several other documentaries and co-founded the activist organization CODEPINK, was one of The Square ’s executive producers. How did she get involved in its creation?

Oh, Jodie has been a magic godsend, really, for this film. She has been fighting for change around the world for a long time, such as with the creation of CODEPINK. What Jodie saw in the film was this “look at how change actually happens” [aspect]. Usually, members of the public sort of see “the greatest hits of change”—where Martin Luther King gives his speech or Gandhi’s successful—but they never see the very difficult, boring, depressing, heartbreaking moments. They never see the downside. Films like The Square give people an understanding that these kinds of change take patience. When you see characters depressed, and having lost and failed, what’s so important is that they go back to try again the next day. That is what you see in this film. And that’s why Jodie got very excited about this film. Without her, The Square would not have been finished.

Will The Square be shown in Tahrir Square?

Our dream is to show The Square there. That’s where it was born. We just showed it in Mexico City [in Plaza San Jerónimo]—the energy was tangible. In Ukraine, we showed it on blowup screens in Kiev in [Maidan] square. We intend to show it in squares in places around the world. We’re dying to bring it back to Cairo to show it in Tahrir. We’re going through the complicated bureaucratic process of getting that approval. When we go back to Egypt we’ll see what happens.

Do you have any apprehension about showing The Square in Egypt today, given the government’s recent pushback against dissent?

We are going through a very dark time in Egypt now. Al Jazeera journalists have been arrested. Human rights lawyer Ragia Omran just told me more than 1,000 people have been arrested since January 25. There’s a former member of Parliament who is facing a court case because of a tweet he wrote.

But I don’t think that the fight is over. We’ve only been in the struggle for three years; the time between the American Revolution and Constitution was something like 16 years. We’re in the middle of the struggle. Even though people are being arrested and rights are being trampled on, that’s why this is the most important time for this film to come out.

Our characters are still deeply optimistic—they wouldn’t be struggling for change if they didn’t believe there was a hopeful future. If you speak to each one of them, including Magdy [Ashour], the Muslim Brotherhood character, everybody says, “We’ll never go back.” There’s a staying power to this movement, and people will continue fighting for change.

So yes, it’s a very scary time. At the same time, we made a film about people fighting on the frontlines for change, and we need to face this fear head-on. That’s part of what we’re doing right now, by releasing this film and by going through [Egypt’s] censorship process.

It seems like in great Hollywood tradition, The Square: The Sequel is begging to get made. What’s next for you?

Releasing this film in Egypt is something that is closest and dearest to our hearts. The Square is a stand-alone film. However, since we finished it, there have been hugely important political events that have happened. We do have cameras still filming on the ground. That’s what’s exciting, actually, about releasing The Square on Netflix, because people are watching it online. So they can immediately connect to our Facebook page, our YouTube channel, or go to the Twitter hashtag #TheSquare and continue the conversation.

We have the ability—from the 1,600 hours we filmed and from the stuff we’re still filming—to upload pieces online to continue that conversation.

We’re living in an age of mass uprisings. Every day there seems to be another protest—such as those in Bosnia, Venezuela or Ukraine. What do you make of these mass revolts?

Young people are trying to change their relationship with their government. It’s this exciting time when they’re using a public space as a political tool for change. Even though the specifics in different countries are very different, there is a common energy—perhaps like in the ’60s—that is present around the world. And because the world is more interconnected, because young revolutionaries can see what’s happening in Kiev and vice versa, there’s an amazing, almost magical energy that happens when people are connecting with and learning from each other.

What was it like being nominated for an Academy Award?

We could not be more thrilled to be in the company of such incredibly talented filmmakers and storytellers. What we’re really excited about, though, is the fact that with this nomination, this film has the ability to affect the conversation on the ground in Egypt as a president and parliament are being elected. That’s a rare place for a documentary to be.

People who we have followed in our film are fighting for very basic human rights and social justice in the country. When publications say, “The struggle in Egypt is over; it’s failed; a military government has taken over,” that shuts the door on others continuing to believe in the struggle of those in the country.

The film’s Oscar nomination, instead, elevated this conversation. When we told Ahmed [Hassan] about it, he said, “I want to run down the streets yelling and screaming because this means that our story, our continuing struggle, will never be able to be silenced.”