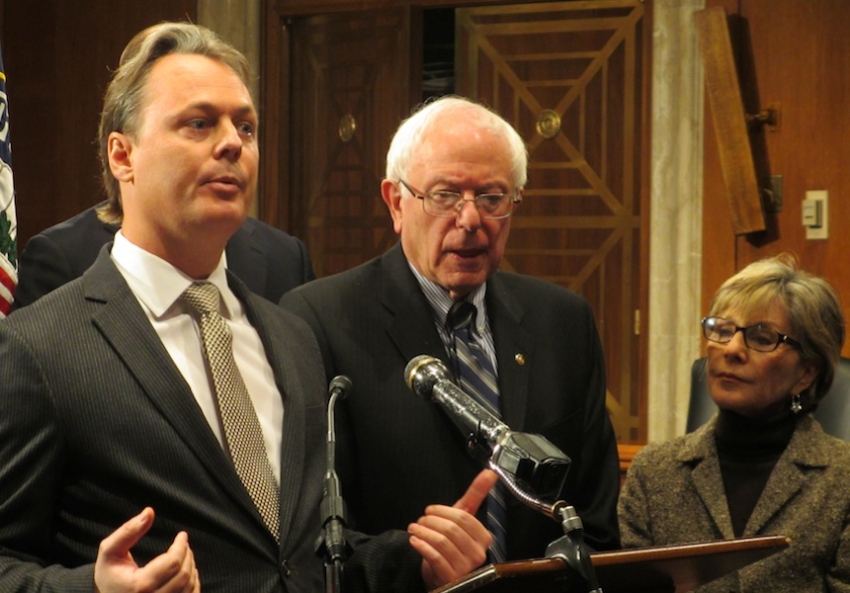 Conflict in Ukraine Could Be a Boon for Big Gas

A slew of bills in Congress would expedite permits for liquefied natural gas exports.

But the boom has been restricted to domestic markets, which now wrestle with overproduction and oversupply. So in recent years, producers have set their sights on foreign soil, where American-drilled gas could fetch far higher prices than it does at home.

The mounting tensions in southeastern Ukraine may hand the American natural gas industry one of its biggest policy victories in years.

Citing the Kremlin’s nefarious energy influence over Ukraine and Europe at large—Kiev gets about 60 percent of its gas supply from Russia, the EU 30 percent—Congress is making moves that would ostensibly unleash a flood of gas overseas from America’s comparatively friendly shores. Representatives Ted Poe (R-Tex.), Cory Gardner (R-Col.) and Mike Turner (R-Ohio) each introduced bills earlier this month to supposedly fast-track liquefied natural gas exports to the regions. Mark Udall (D-Col.), meanwhile, sponsors similar legislation in the Senate.

Under existing law, companies wishing to export natural gas must apply first to the Department of Energy, then to the Federal Energy Regulatory Commission. The DOE automatically approves applications to export to countries that share free trade agreements with the United States—countries without such deals, like Ukraine, require a lengthier review process. Each of the four bills aims to speed up that part of the review.

Poe’s bill, the Fight Russian Energy Exploitation (FREE) Act, adds the EU, Ukraine and a number of Central Asian countries to the expedited approval process. Turner and Udall’s bills add the WTO countries, which include Ukraine. Gardner’s, meanwhile, adds the WTO countries and triggers the automatic approval of pending applications for which a notice has been issued in the Federal Register.

The bills’ sponsors claim the legislation will help bolster Ukraine and the rest of the EU’s energy supplies against Russian influence.

But Tyson Slocum, director of Public Citizen’s Energy Program, maintains the latest push for reforms has little to do with Crimea or Russia. Instead, he says, it’s about an industry seeking timely justification for its long-term interests. A change in permit policy today would likely pay major dividends in the future, when domestic producers are actually able to move gas abroad in large quantities.

Exports are a logical step for oil and gas producers intent on accessing new markets.

Over the last decade, the combination of horizontal drilling and fracking in American shale formations—such as the Bakken and Marcellus—has driven soaring production and lower natural gas prices across the country. But the boom has been restricted to domestic markets, which now wrestle with overproduction and oversupply. So in recent years, producers have set their sights on foreign soil, where American-drilled gas could fetch far higher prices than it does at home. In Asia, for example, LNG is about five times as expensive as it is in the United States.

“Producers, particularly in the Marcellus shale but elsewhere as well, have limited opportunities to move their cask to meet global demand,” says Slocum. “So this is all about [trying] to globalize natural gas prices, because price differences are vast between Europe and Asia and North America because of isolation of the market. If you’re able to globalize that, you’re able to sell your fracked gas for far more [and] earn more profits.”

To that end, American oil and gas producers are aggressively trying to liberalize export policy. The industry’s leading lobbying organizations, the Independent Petroleum Association of America (IPAA) and America’s Natural Gas Alliance (ANGA), have publicly backed expediting LNG permits and boosting exports since well before the situation in Crimea garnered international attention. In February of this year, a group of mostly Gulf Coast-based companies unveiled a new coalition designed to win support on the Hill for export reform—“Our Energy Moment.” (That group, too, is now publicly tying the issue of gas exports to Ukraine.)

And though the flare-up in the Black Sea supposedly inspired the recent push, many of the members of Congress supportive of the four new bills have backed similar legislation in the past. Last June, for instance, Rep. Poe introduced a bill that would remove the Department of Energy from the LNG export permitting process entirely. Just a few months after that, he authored legislation that would put a 60-day limit on the DOE’s review of export applications—the failure to issue a decision would trigger automatic approval. Rep. Turner also introduced a similar version of his 2014 bill in February 2013.

The same story goes for Sen. John Barrasso (R-Wyo.), who last Wednesday tried to attach an amendment to a congressional aid package for Ukraine that would expedite the LNG permitting process. (Foreign Relations Committee Chairman Bob Menendez ruled the move out of order). It's a familiar subject for the Cowboy State’s junior senator: Last year, Barrasso introduced legislation to streamline export permits to NATO countries and Japan.

The disingenuousness of the whole affair has Raúl Grijalva (D-Ariz.), co-chair of the Congressional Progressive Caucus, crying foul. He calls the crisis in Crimea a “convenient excuse” for pro-LNG members of Congress.

“It’s insulting in that the appeal is so base,” Grijalva says. “And the XL [pipeline] is essential in helping Ukraine too,” he says sarcastically—a reference, perhaps, to recent comments from Paul Ryan that linked U.S. influence in Ukraine to construction of the Keystone.

Natural gas to the rescue? Not quite

While they’re broadly supportive of these efforts, representatives of the gas producers themselves are still quick to acknowledge that changing existing rules would have no immediate impact in terms of foreign aid.

“You cannot just turn on the spigot and begin sending natural gas to Ukraine,” says Dan Whitten, spokesperson for America’s Natural Gas Alliance (ANGA). “It will take some time to build the terminals, get the contracts in place to have that done. We hope that the pace of progress will speed up, but we’re not of the view that you can just decide to start exporting and then begin doing it tomorrow.”

That’s because the industry lacks the capacity do so. As of today, there’s not a single facility in the United States that’s shipping liquefied natural gas abroad.

The nation’s first LNG export terminal, Cheniere Energy’s Sabine Pass on the border between Texas and Louisiana, isn’t scheduled to start shipping gas until late 2015. And according to Energy Secretary Ernest Moniz, any other facilities aren’t likely to export before 2017 or 2018.

Still, according to some in the industry, the bills are necessary to prevent future crises from taking place. “You have to start somewhere,” says Julia Bell, spokesperson for the IPAA. “And if we had started this a few years ago then we probably wouldn’t be in the position that we are right now, with Russia exerting its energy influence the way it is.”

The gas producers' major players won’t officially back any of the particular proposals, though, until they see how things shake out in the House and Senate.

“We’re just waiting to see which one Congress rallies behinds,” says Bell.  “And we’re going to support that.” ANGA maintains a similar stance.

And the fate of the bills themselves remains equally uncertain. Any of the four pieces of legislation would likely pass the Republican-dominated House, which has proven more than loyal to the fossil fuel industry. Things would be more complicated in the Senate, where many Democrats take their cues from the administration.

Energy Secretary Moniz has acknowledged that speeding up permits would do little to help Ukraine in the short-term, but said he “welcome[s] consultation” with Congress on reforming the export approval process.

The biggest wild card is Mary Landrieu (D-La.), the new chair of the Senate Energy Committee and longtime champion of oil and gas interests. Public Citizen’s Slocum worries that a yes vote in the House on any one of the bills could provide impetus for Landrieu to move along similar legislation in her committee.

Landrieu has publicly pressured the DOE to approve two export facilities in Louisiana, which has enough pending applications to make it a major transport hub. She’s also very supportive of gas exports in general.

And as the senator faces a tough re-election campaign—polls give her GOP opponent a slight edge—it’s probably in her best interest to stay on industry’s good side. Only two senators, both Republicans facing Tea Party challengers, have taken more money from energy companies than Landrieu has this election cycle—Minority Leader Mitch McConnell (R-Ky.) and John Cornyn (R-Texas).

Ultimately, environmentalists can only hope that reason triumphs in the end over corporate interest. Sadly, that’s never a given when legislators tackle energy policy.

“We’re physically unable to make [exports] happen,” says Slocum. “But that doesn’t matter in terms of their campaign, as long as they can make people believe there’s a connection.”