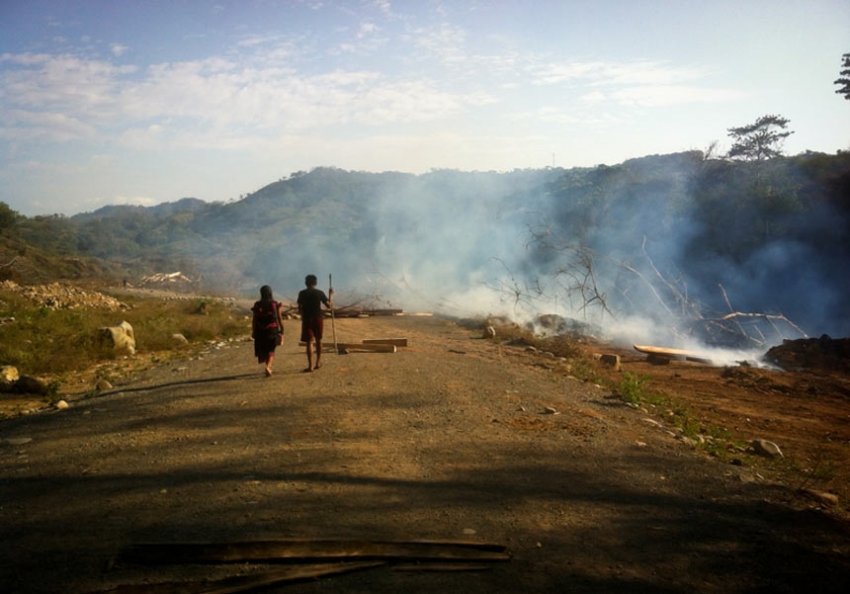 In Panama, Indigenous Ngäbe-Buglé activists are fighting a dam they say will threaten their way of life. (Lawrence Reichard)

Village Of The Dammed

In Panama, the Ngäbe-Buglé fight to save their river and their land.

On several occasions Ngäbe-Buglé activists and their indigenous, Latino, labor and supporters have blocked the nearby Pan-American Highway, Panama’s chief economic lifeline. ... But they’ve paid a heavy price for their militancy. At least two protesters have been killed in clashes with police.

Walking along the stone and dirt road that follows the Tabasará River to the construction site of Panama’s controversial Barro Blanco hydroelectric dam is a bit like stepping into a Gabriel García Márquez novel, one titled Chronicle of a Battle Foretold. The road is blocked by huge felled trees and seemingly endless piles of rocks and boulders. You know the battle’s coming, but you don’t know when, or how violent it will be.

The roadblocks were put in place by indigenous Ngäbe-Buglé activists who say that the private Panamanian company that’s building the Barro Blanco dam, Generadora del Istmo S.A. (Genisa), built the road so Panamanian police can cross the rough terrain and evict potentially hundreds of Ngäbe-Buglé protesters. The Ngäbe-Buglé firmly refuse to leave the land—their land—that is slated to be inundated by the dam. The trees, rocks and boulders they’ve used to block the road might not pose much of a challenge for Genisa’s heavy equipment, but the gaping hole that they tore through Genisa’s makeshift bridge over the deep, fast-flowing Tabasará could be a real problem.

High up on a bluff overlooking the Barro Blanco construction site and the scarred Tabasará, hundreds of Ngäbe-Buglé demonstrators have constructed a makeshift protest camp replete with banners and flags and one small, rudimentary, three-wall structure made of palm fronds. Scores of protesters sleep under the stars on tarps and pieces of cardboard. They eat handfuls of Froot Loops, and refried beans are dished out of a five-gallon bucket into cutaway plastic soda bottles.

A few hundred yards away on another rough dirt road, a small contingent of police wearing shirts that read “ANTI-DISTURBIO” (anti-riot) keeps an eye on the camp.

Defying heat in the upper 90s, a young man sitting beside me is covered from head to toe, masking his identity. Only his eyes show. “Where are we supposed to go?” he says. “This is our land. We live here. We have always lived here.” This refrain is repeated over and over by the Ngäbe-Buglé.

Construction of the hydroelectric project began in 2011, and resistance to it has been fierce. On several occasions Ngäbe-Buglé activists and their indigenous, Latino, labor and supporters have blocked the nearby Pan-American Highway, Panama’s chief economic lifeline. In one 2012 action, they grabbed national headlines by shutting down the road for more than eight days. But they’ve paid a heavy price for their militancy. At least two protesters have been killed in clashes with police. And now, with construction of the dam approaching completion, the stakes are even higher.

Genisa has said that only 14 acres of land and five indigenous families will be affected by the dam. According to Ngäbe-Buglé activists, those five families have all refused offers from Genisa of between $1,000 and $4,000 each to abandon the lands they have cultivated, hunted, fished and lived on for what they call “forever.”

But Ricardo Miranda, a Ngäbe activist fighting the dam, says that more than 400 Ngäbe-Buglé will be displaced and another 3,500-plus will lose farmland, hunting and fishing grounds, and access to fresh, clean, potable water. A 2013 report from the United Nations Development Programme concluded that it’s likely that three Ngäbe-Buglé villages will eventually be flooded by the project. Gone too will be four pre-Columbian petroglyphs, which, according to Panamanian archaeologist Jonathan González, are protected national monuments. (Genisa did not respond to a request for comment.)

Genisa is incorporated in Panama, but its board chairman is Luis Kafie, one of the richest men in Honduras. According to Genisa’s website, the Ngäbe-Buglé Comarca’s General Congress delegated a decision on Barro Blanco to the Regional Congress of Kädriri, which approved the project. But Ricardo Miranda insists that the agreement is invalid because the congress is not authorized to negotiate a land deal with a private company, and that in such cases a public referendum is required.

Barro Blanco is being financed by the Dutch FMO Bank, the German DEG Bank and the Central American Bank for Economic Integration (CABEI). All the banks’ websites tout their environmental and social responsibility, and Miranda says he hopes solidarity groups in Holland and Germany will pressure FMO and DEG to adhere to official European Union social responsibility standards and abandon Barro Blanco.

In the meantime, the Ngäbe-Buglé have taken their fight right to Genisa and the Panamanian government. Their first protest camp was a mile or two upstream from, and out of sight of, the dam’s construction site. But in March they upped the ante and moved the camp downstream to its current location, within eyesight of the construction site. Panama has national elections coming up on May 4, and few think the government will move on protesters before the election. But all bets are off if the protesters move on to the Barro Blanco construction site, which they have said they likely will—although they won’t say when.

Miranda is the general coordinator of the April 10 Movement (M-10), an organization founded by Ngäbe-Buglé activists in April 1999 to defend the Tabasará watershed from exploitative hydroelectric projects, and in an interview in Panama City, Miranda said that M-10 is ready if the government moves against the protesters. According to Miranda, 20 labor unions and indigenous and campesino groups have committed to shutting down major roads and highways in at least 15 spots scattered throughout the country if Barro Blanco construction is not halted soon. Miranda added that at least some roads will be closed if the government attacks the Ngäbe-Buglé protest camp.

Meanwhile, the Panamanian government is ratcheting up the pressure. On March 20, Miranda says, the government issued warrants for him and for his uncle and fellow activist Manolo Miranda. And activists blame the government for a recent wave of cell phone malfunctions affecting their ranks. With Panama’s economy booming, electricity shortages widening, and the Ngäbe-Buglé digging in to defend their land, the real battle over Barro Blanco may be just beginning.

Lawrence Reichard is an activist and freelance journalist currently residing in Panama. He can be reached at lreichard@gmail.com.