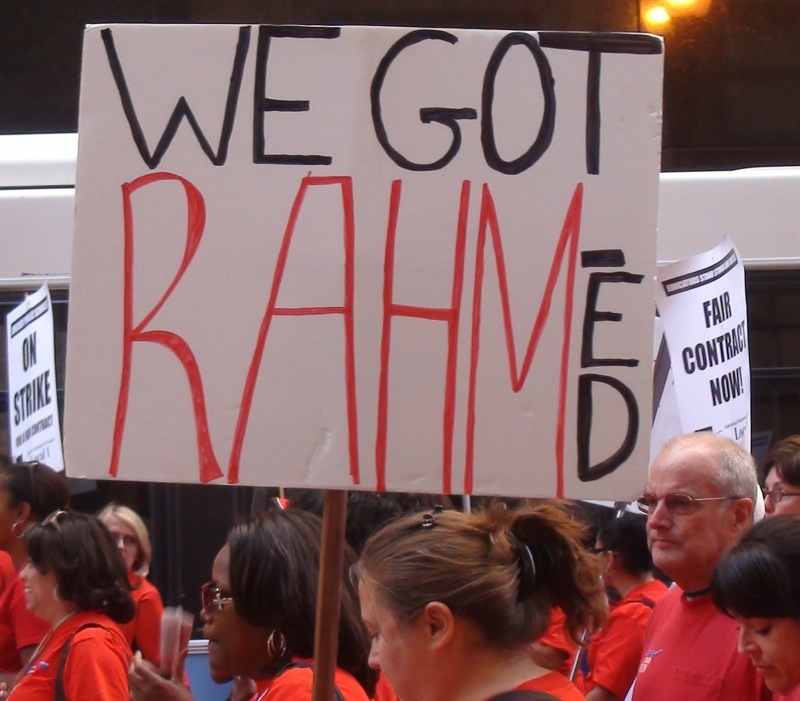 The Chicago Teachers Union went on strike in September of 2012, protesting layoffs and cuts in funding. Yet a series of recent revelations show that Mayor Rahm Emanuel continues to place corporate interests above residents' basic needs. (Firedoglake / Flickr / Creative Commons)

Corruption in the Windy City

In times of crisis, public employees often take the fall while the corporate class prospers.

We aren’t told that while states and cities pretend they have no money to deal with public sector pensions, many are paying giant taxpayer subsidies to corporations—subsidies that are often far larger than the pension shortfalls.

In America, there is regular ol' corruption, and then there is Chicago Corruption, with a capital “C.” America's third largest city is so notoriously corrupt, all you have to do is say “Chicago politics” and many people instantly start making jokes about payoffs and reciting lines from “The Untouchables.”

Yet, while the Windy City's brand of corruption is extreme, it is also emblematic, as a recent spate of revelations prove.

Chicago is facing a pension shortfall for its police officers, firefighters, teachers and other municipal workers. If you've followed this story, you've probably heard that the only way Mayor Rahm Emanuel can deal with the situation is to slash those workers' pensions and to jack up property taxes on those who aren’t politically connected enough to have secured themselves special exemptions.

This same fantastical story, portraying public employees as the primary cause of budget crises, is being told across the country. Yet, in many cases, we’re only being told half the tale. We aren’t told that the pension shortfalls in many locales were created because local governments did not make their required pension contributions over many years. And perhaps even more shocking, we aren’t told that while states and cities pretend they have no money to deal with public sector pensions, many are paying giant taxpayer subsidies to corporations—subsidies that are often far larger than the pension shortfalls.

Chicago exemplifies how corruption is often at the heart of this grand bait-and-switch.

According to a report by the taxpayer watchdog group Good Jobs First, the supposedly budget-strapped Windy City—which for years has not made its full pension payments—has mountains of cash sitting in a slush fund controlled by its poverty-pleading mayor. Indeed, as the report documents, the slush fund now receives more diverted property taxes each year than it would cost to adequately finance Chicago’s pension funds.

Yet, Emanuel is refusing to use the cash from that slush fund to shore up the pensions. Instead, his new pension “reform” proposal cuts pension benefits, requires higher contributions from public employees, raises property taxes—but also quietly increases his slush fund.

Why, you ask, would Emanuel refuse to relinquish some of the half billion dollars a year that is going into his slush fund? Perhaps because he has been using it to enrich Chicago's corporate class, including some of his biggest campaign donors.

For example, just after Emanuel took office, he used the slush fund to finance a $7 million subsidy that will benefit a grocery chain. The CEO of that chain’s parent company gave Emanuel’s campaign $25,000.

$29 million subsidy to support a new skyscraper development plan. Opponents of the subsidy told CBS that the money is simply financing “a very expensive corporate plaza” for the building. Now here’s the kicker: The building will house the new Chicago headquarters of a law firm whose employees have given Emanuel more than $125,000.

Then there is Emanuel’s $55 million subsidy for a new hotel near Chicago’s convention center. An investment company that owns a major stake in the construction firm gave Emanuel's campaign $31,500.

Not to sound like a broken record, but again: This same thing occurs in states and cities across the country. The wealthy corporate interests who bankroll politicians have for years convinced those politicians to not make required pension payments and to instead spend the cash on taxpayer subsidies - the kind that happen to go to those politicians' donors.

Now that the bill for such irresponsibility is coming due, those bankrolled politicians are trying to protect the subsidies their donors so cherish by trying to balance budgets primarily through punitive measures against taxpayers and public employees.

Unfortunately, in this massive wealth transfer, corrupt Chicago is not the anomaly. It is a microcosm.