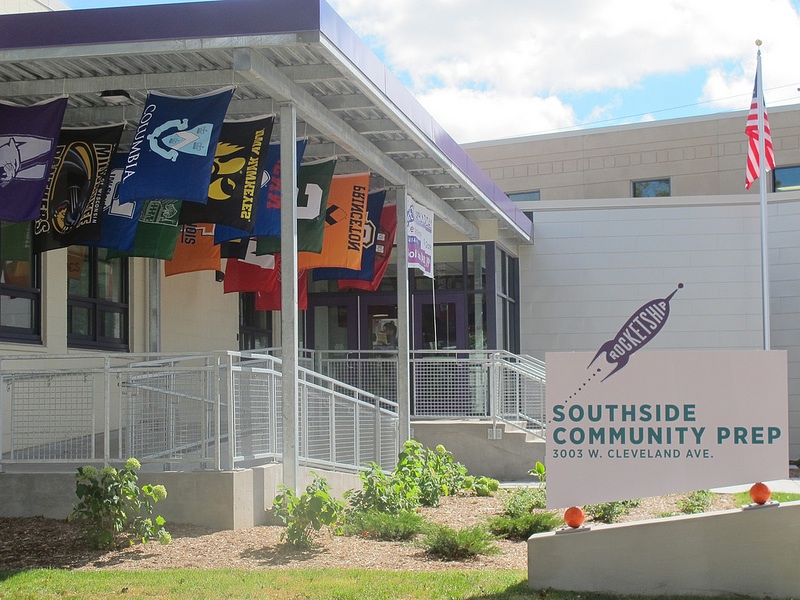 In pushing these efforts, politicians, rightwing think tanks, chambers of commerce, and, most of all, the American Legislative Exchange Council are actually creating the very problem of failure in the school system they claim their privatization plans will help address.

Gordon Lafer, a political economist and University of Oregon professor who has advised Congress, state legislatures, and the New York City mayor's office, landed at the airport in Milwaukee, Wisconsin, late last night bringing with him a briefing paper on school privatization and how it hurts poor kids.

“I hope people connect the dots,” Lafer said by phone from the Milwaukee airport.

Lafer's research, commissioned by the Economic Policy Institute to evaluate the school-privatization push in Milwaukee, is a sweeping indictment of the growing private charter school industry and other schemes backed by rightwing groups and big business that siphon public funds out of public schools and enrich corporate investors at the expense of quality education for poor children.

Milwaukee is ground zero for school privatization, having pioneered the use of publicly funded private school vouchers in 1990.

In its last session, Wisconsin legislators pushed forward bills to close low-performing public schools and replace them with less accountable, privately run enterprises. The Economic Policy Institute asked Lafer to analyze the effects of privatization on the children these schools serve.

The results are not pretty.

A popular chain of charter schools called Rocketship, which originated in California and has spread to Wisconsin, with the enthusiastic support of state legislators and the local chamber of commerce in Milwaukee, is “a low-budget operation that relies on young and inexperienced teachers rather than more veteran and expensive faculty, that reduces curriculum to a near-exclusive focus on reading and math, and that replaces teachers with online learning and digital applications for a significant portion of the day,” Lafer writes.

With no gym, art class, librarians, or significant science or social studies, Rocketship provides a stripped-down program of study with a heavy focus on standardized tests.

“The education model of the Rocketship chain of schools, a company central to the education reform push in Milwaukee, is particularly ill suited to providing the city's children with a high-quality education,” Lafer found.

Because of its extraordinarily high teacher turnover (the chain relies heavily on Teach for America volunteers), its large classes, and reductive curriculum, Rocketship subjects kids most in need of consistent, nurturing, adult attention to low-quality instruction and neglect.

That model, which is also on display in Milwaukee's low-performing voucher schools, is demonstrably harmful to kids. But it has generated big profits for wealthy investors.

From 2010 to 2013, Rocketship increased it assets from $2.2 million to $15.8 million. And while it posted impressive test scores at its first schools in California, over the last four years, test scores have fallen at every Rocketship school. All seven Rocketship schools failed to make adequate yearly progress according to federal standards for the last school year.

“Given that Rocketship places such a strong emphasis on standardized testing, it is telling that, even by this measure, the company has faced struggles and disappointments,” Lafer writes.

While Rocketship is a nonprofit, its business model enriches its directors through a deal with a licensed software company called “DreamBox,” supplied by for-profit vendors, who happen to also sit on Rocketship's board.

According to a 2013 Department of Education evaluation, DreamBox has “no discernible effects on mathematics achievement for elementary school students.”

Despite that failing grade, Rocketship continues to use DreamBox.

“It appears the question [Rocketship] aims to answer is not simply, 'How can we do better by poor kids?' but rather, 'How can we educate poor kids while generating a 15 percent rate of return for investors?'” Lafer writes.

Both the rapidly growing private charter industry and other school privatization efforts, Lafer shows, have failed to produce quality schools.

Worse, in pushing these efforts, politicians, rightwing think tanks, chambers of commerce, and, most of all, the American Legislative Exchange Council are actually creating the very problem of failure in the school system they claim their privatization plans will help address.

A recent proposal in the Wisconsin legislature, expected to come up again next session, would mandate that 5 percent of all of the state's public schools receive “failing” grades, which lead to closure after the third “F.” Schools deemed “failing” would be replaced by charter shools such as Rocketship. The charter schools, by contrast, a majority of whom failed to meet state expectations in 2012-2013, would get an eight-year grace period before they were judged to have failed, and could not be closed until their ninth year, no matter how many Fs they received.

By judging schools only on standardized test scores, even schools that serve the poorest children with the most chaotic backgrounds, such skewed “accountability” systems set them up to fail, Lafer found.

The resource drain from the public schools, as public funds go to more private business ventures, makes the problem worse.

Lafer takes it a step further, pointing out in his report that the same Chamber of Commerce officials who promote Rocketship in Milwaukee send their own kids to enriching, well-funded schools with art, music, and small classes.

“The fact that what's considered the gold standard for poor students in Milwaukee is considered unacceptable for kids in the suburbs is just wrong,” Lafer said by phone.

Finally, in his report, Lafer outlines how the corporate lobbyists and their allies pushing school privatization are manufacturing failure for poor communities in a broad, coordinated way, including “the dominant role of corporate lobbies in promotion of online learning and privately run charter schools; the corporate lobbies' support for dramatic cuts in funding for public services, including education; and these same lobbies' advocacy for an economic agenda that makes it harder for many families to work their way out of poverty.”

“The idea that what Chamber of Commerce lobbyists lie awake at night thinking about is what will help poor kids … I mean, we're adults, right?” Lafer commented by phone.

Wisconsin is on the leading edge of school privatization. But this is a national issue. And Lafer's report has major national implications.

“When people understand what it is, the corporate agenda for education is broadly unpopular,” Lafer points out.

“People want the same things for their kids: in-person instruction, teachers who see what's special about their kid, and, even if they don't particularly care about art and music, a general sense of a broader education that helps their kids to develop to their full potential,” Lafer says.

He compares support for public education to the minimum wage, which also enjoys broad public support.

“The Kochs and the Waltons are thinking about advancing an agenda that makes life materially harder for the majority of the country. How do you do it? One way is to continually lower expectations.”

Hence the narrative that public schools have “failed.”

But a national pro-public-school movement is pushing back.

Lafer points to the Chicago teachers' strike as particularly significant, because it focused on quality education for kids.

“It's not just what you are against but, for teachers, what's your vision for a humane, just school system,” he says.

“Teachers talk about what it means for kids to have big classes and no services. But for a long time those conversations only happened on the side, not in the context of the union.”

The Chicago teachers' strike changed that.

“Around the country unions are thinking we need to and we can put issues of educational quality front and center in our campaign,” Lafer says.

And he points to the growing movement of parents who are opposing standardized testing and a stripped-down education model.

Reprinted with permission from The Progressive. This report was made possible by a generous grant from the Voqal Fund.

Ruth Conniff is the editor of The Progressive magazine.