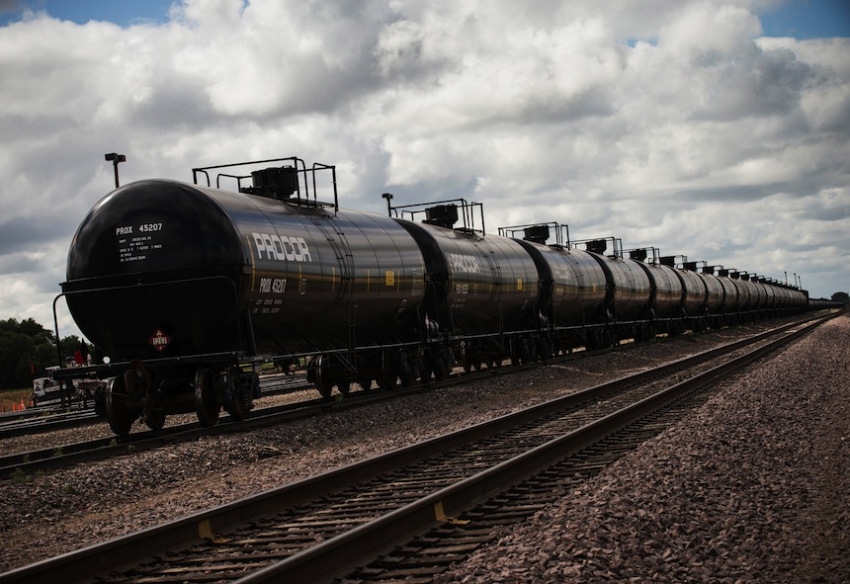 Emails cast doubt on the integrity of a federal crackdown on unsafe shipping practices.

PHMSA routinely comes under fire for being too friendly with the energy industry that it regulates and for taking too long to issue much-needed rules. The small-budget agency also has oversight of the nation’s interstate oil and gas pipelines. Its 151 inspectors cover more than 2 million miles of pipeline across the country.

Emails obtained by In These Times show a cozy relationship between North Dakota’s oil industry and a chief federal inspector charged with monitoring the safety of shipping crude oil by rail. The emails cast serious doubts on the integrity of the federal government’s supposed crackdown on the industry’s shoddy shipping practices—a subject of growing concern in the midst of a largely unregulated, and in some cases, deadly, transport boom.

Last August, the Pipeline and Hazardous Materials Safety Agency (PHMSA) and Federal Railroad Administration announced they were rolling out the “Bakken Blitz”—a crackdown on shippers and carriers that mislabel their cargo. Federal hazmat regulations require trains carrying oil to properly classify and identify their shipments with placards. These practices are supposed to ensure that oil is safely packaged before being shipped. They’re also aimed at informing railroad personnel and, in the event of a mishap, any emergency responders. Regulators introduced the Blitz just one month after the Lac Mégantic disaster, when a runaway freight train carrying oil exploded in the small Quebec town, killing 47 people. In that case, Canadian safety investigators found American shippers in North Dakota’s Bakken region had understated the volatility of the oil that ignited and destroyed much of Lac Mégantic’s downtown area. Improper classification caused the shipment to be transported in an improper package. Emergency responders, too, were caught by surprise at how quickly the fire spread and how long it burned.

As part of the Department of Transportation’s new enforcement effort, PHMSA officials show up unannounced at rail facilities to conduct classification inspections—at least that’s what an agency spokesperson told In These Times at first. An email obtained through a Freedom of Information Act request strongly suggests that Kipton Wills, Central Region Director of PHMSA's Office of Hazardous Materials Enforcement, pre-arranged at least one of his agency’s visits to a Hess Corp. rail yard in Tioga, North Dakota, last October.

“We will accommodate your request to inspect trucks at the Tioga Rail Terminal,” Jody Schroeder, the rail terminal supervisor, wrote in an email to Wills dated October 3, 2013—five days before the inspection took place. “At your convenience please let me know your schedule for this event.”

Schroeder later confirmed that Wills reached out to him about the visit.

Earlier this month, PHMSA spokesperson Gordon Delcambre told In These Times that such inspections are impromptu. “They’re unannounced,” he said. “[Inspectors] figure out who they’re going to visit ahead of time, make plans, go to the area and then start knocking on doors.”

Indeed, this is normal procedure. The agency’s handbook notes “the policy of the PHMSA hazardous materials enforcement program is to conduct unannounced inspections.” Exceptions can include cases of “apparent imminent danger to enable the company to correct the danger,” instances where special preparations, records and equipment are necessary, and cases where “giving advance notice would enhance the probability of an effective and thorough inspection.”

Delcambre said he would follow up with PHMSA’s Central Region director Wills to confirm the crude-by-rail inspections were unannounced. “Our field hazmat inspector procedures have not changed with our Bakken region effort,” Delcambre wrote later that day in an email. “PHMSA inspectors still do ‘unannounced’ visits to hazmat shippers and offerors and have been taking crude oil samples as needed at the facilities they call on.”

But when asked to respond for this story, Delcambre qualified that answer.

“Because we were conducting inspections on Hess Property of other entities (highway carriers) and in order to do that safely, in some cases such as this one, prior open coordination for facility orientation and confirmation of appropriate personal protective equipment was needed,” he wrote in an email.

The inspection of the Hess facility, which also services other oil and gas companies like Marathon, did turn up “probable violations.” Out of 18 oil samples that PHMSA collected and tested at the Tioga plant, the labeling on 10 of them understated how flammable the cargo was. In each of those cases, Hess and Marathon misclassified Packing Group I oil as belonging to Packing Group II. Packing Group I is the highest risk designation, reserved for crude oil with an initial boiling point lower than 95 degrees Fahrenheit. It’s the most explosive kind of crude.

But Martin MacKerel, an environmental activist with the Bay Area-based Sunflower Alliance, says that these fines could have been much higher. “It's clear that announcing the inspections gave the oil company the opportunity to reduce their fines,” says MacKerel. “These kinds of inspections need to be unannounced to have any real value.”

As he announced the slew of fines, the only federal enforcement thus far to stem from the “Bakken Blitz,” Transportation Secretary Anthony Foxx sounded a stern warning:

The fines we are proposing today should send a message to everyone involved in the shipment of crude oil. You must test and classify this material properly if you want to use our transportation system to ship it.

But emails from the top PHMSA official on the ground to Hess strike a much friendlier tone.

On February 4, the day that the fines were publicly announced, Schroeder reached out to PHMSA’s Wills asking if he knew anything about the violations that the inspector’s higher-ups had just announced. Wills replied to Schroeder that he had just learned about the fines, but said that he hoped PHMSA and industry leaders could “get it all on one page working together as a coordinated effort not an enforcement effort.”

Avoiding “enforcement” would appear to contradict the point of the Bakken Blitz, not to mention the very mission of PHSMA—whose job is to enforce existing regulations. After all, federal hazmat regulations are nothing new. The Department of Transportation’s crackdown is only supposed to make sure that North Dakota oil shippers are following the same practices that other truck drivers and railroad operators across the country have to comply with every day.

The emails may indicate a disconnect between federal priorities and those of local regulators. Just before the fines were issued, safety concerns over crude-by-rail shipments had again taken the national stage. On December 30, 2013, a derailed grain train collided with an oil train in Casselton, North Dakota, sending 400,000 gallons of Bakken crude up in flames, and forcing residents to evacuate. Days after that, PHMSA issued a safety alert warning, noting “the type of crude oil being transported from the Bakken region may be more flammable than traditional heavy crude oil.” And later that month, Secretary Foxx issued a “Call to Action” and met with railroad executives and major players in the oil and gas industry like the American Petroleum Institute.

Referencing this meeting in his email to rail supervisor Schroeder, Wills appeared to suggest the impetus for the fines came from agency superiors in Washington “Once the results came back and the Secretary of Transportation met with the energy companies and railroad CEO’s [sic], it left the control of field staff and became a larger issue,” he wrote. “In my mind, the solution is getting the bosses from both sides around the table and discussing feasible testing schedules, etc. I will be in North Dakota next week and I am hoping to have a lot more information from my own agency by then on what the [Notice of Proposed Violation] means and what we can do as far as working in partnership.”

Those bosses eventually did sit around the table. PHMSA spokesperson Gordon Delcambre tells In These Times that officials from the agency’s Hazmat Safety Office met with representatives from the North Dakota Petroleum Council on April 1 to discuss “joint interest in the safe transportation of crude oil.” The Council does not publicly disclose all of its members, but the board of directors includes Hess, Marathon, Whiting and other major energy companies such as Enbridge Pipelines and ConocoPhillips.

There have been no fines announced since February, although Delcambre says that Bakken Blitz is still ongoing.

Safety advocates say the emails illustrate a business-friendly regulatory approach that runs counter to the core mission of the agency.

“It's telling that PHMSA has no interest in enforcement,” says Matt Krogh, Tar Sands Free West Coast campaign director at ForestEthics, an environmental group based in the Pacific Northwest. “Their goal appears to be to work together with industrial violators, not to provide the enforcement mechanism provided for in the law, and requested by higher ups in the Department of Transportation. Companies that routinely misclassify hazardous materials destined to transit America's main streets and urban centers should be prosecuted, not coddled.”

It’s a familiar critique of what’s been referred to as a “sleepy, industry-dominated organization.” PHMSA routinely comes under fire for being too friendly with the energy industry that it regulates and for taking too long to issue much-needed rules. The small-budget agency also has oversight of the nation’s interstate oil and gas pipelines. Its 151 inspectors cover more than 2 million miles of pipeline across the country. And the unexpected shale-drilling boom has left the agency in charge of another daunting task—monitoring crude-by-rail shipments. Grappling with a dearth of pipelines, North Dakota oil producers have found rail to be the easiest, cheapest means of getting their product to market. Railroads carried more than 400,000 carloads of crude oil last year, according to the Association of American Railroads—compared to only 9,500 in 2008.

As shipments have increased, so, too, have accidents. The industry’s safety practices—from the tank-cars and routes it uses to the way it tests and classifies its shipments—garner increasing national and international attention. Last week in Washington, the National Transportation Safety Board convened a “Rail Safety Forum,” bringing together different government agencies and industry officials to discuss growing challenges. And in an unprecedented move, earlier this month, a United Nations panel on hazardous materials agreed to weigh in to the matter. The panel reportedly accepted a request from American and Canadian authorities to examine whether existing shipping rules in North America properly account for how dangerous and volatile Bakken-drilled crude actually is.

Washington may well be making moves to beef up safety practices and enforcement efforts. However, the emails obtained by In These Times raise questions about how successfully that message is being transmitted to inspectors on the ground.

As Oil Plummets, Climate Activists Say Now Is the Time to Mobilize for a Green New Deal