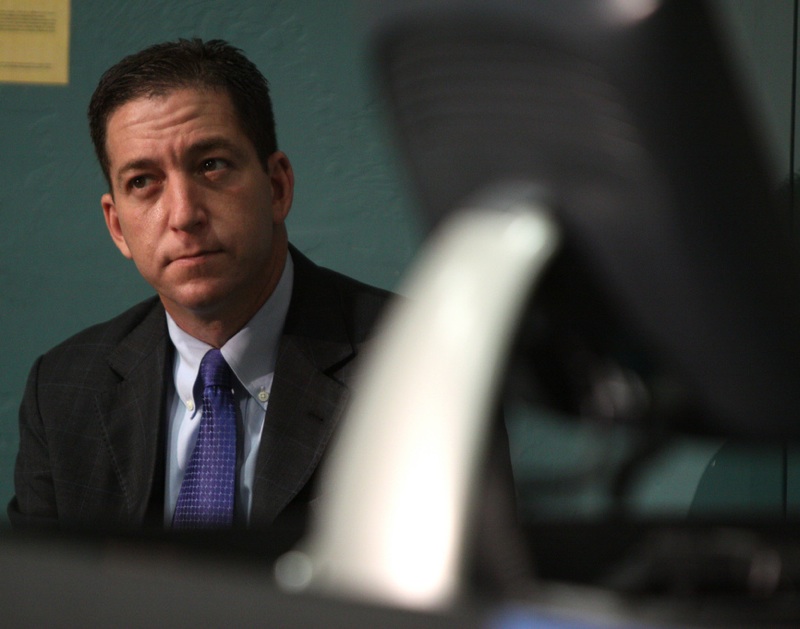 Glenn Greenwald at the Young Americans for Liberty's Civil Liberties tour at the University of Arizona in Tucson. (Gage Skidmore / Flickr / Creative Commons)

Glenn Greenwald’s new book, No Place To Hide, recounts how he and Edward Snowden dragged the secretive agency into the spotlight.

When government officials label Snowden or Greenwald a terrorist or criminal, it's not idle bullshit—it's representatives of one of the planet’s most powerful forces identifying an enemy.

On June 5, 2013, when UK newspaper The Guardian informed U.S. officials that it was about to publish a report about the NSA’s mass surveillance of Americans, the government's response was indignant. Janine Gibson, the paper's U.S. editor, was “not a serious journalist,” The Guardian “not a serious newspaper,” and “no normal journalistic outlet would publish this quickly without first meeting with us,” unnamed officials told the paper.

The report, published later that day, was the first of a string of stories about the NSA that earned The Guardian and the Washington Post a 2014 Pulitzer Prize for public service. No Place to Hide, a new book by journalist Glenn Greenwald—the force behind many of those Guardian stories—is a chilling and precise indictment of the culture of control and secrecy that has become Washington’s “normal,” as well as a story of how it may be coming to an end.

Based on documents carefully purloined by whistleblower Edward Snowden, The Guardian reporting provided unprecedented glimpses into the hyper-secretive world of the NSA, showing an agency with little oversight, vast capabilities and an insatiable hunger to spy on everyone and everything. The responses to the leaks from establishment media, for their part, show a U.S. mainstream press eager and willing to defend and serve power. Greenwald is typically boisterous and unsparing in attacking these two forces, the book's main targets. (Even the Washington Post, co-winner of the Pulitzer, doesn’t escape his ire; Greenwald calls its editorial page writers “vociferous and mindless cheerleaders for U.S. militarism, secrecy and surveillance.”)

No Place To Hide is peppered with criticism of the dysfunctional unwritten rules of U.S. national-security reporting. For example, the practice of “treating [government assertions] with respect no matter how frivolous they are,” “vesting with equal credence the government's defenses and the actual facts,” and “diluting revelations to a muddled, incoherent, often inconsequential mess.” Or the suppression of unfavorable stories at the government's request, as when the New York Times quashed an election-year 2004 story on warrantless wiretapping under George W. Bush. (The paper published it a year later; Greenwald suggests this is because they didn't want to get scooped by a forthcoming book from their own reporter.) And then there’s the jingoist's unholy trinity, “national security,” “terrorism,” and “9/11,” used to justify any government abuse or moral compromise, no matter how great. Or even the myth of objectivity itself, a chimeric neutrality that is in practice a powerful defense of the status quo. All receive treatment, and it's clear: Something is very rotten in the metaphorical surveillance state of Denmark. (In the less metaphorical state of the U.S., with the help of the media, the NSA reigns.)

Greenwald does not pull his punches: Arguments have “obvious moral shortcomings;” they are not merely deceitful, but deceitful “in the extreme.” But his contempt for the swarm of pundits and politicians vomiting, consuming and vomiting again safe, “neutral” opinions in defense of the status quo is cut, seasoned and made palatable by his clearly sourced looks at individual spying programs and especially, the gripping retellings of the events behind the news. Every decision was high stakes, and most are unpacked for the reader. This story will make an excellent movie.

In between polemics and storytelling, Greenwald makes heartfelt and convincing appeals about the importance of privacy—a right with many faces, as law professor Daniel Solove has noted—and the unique danger of widespread online surveillance.

”The Internet is not some stand-alone, separate domain where a few of life's functions are carried out,” Greenwald writes. “It is not merely our post office and our telephone. … It is the epicenter of our world, the place where virtually everything is done. It is where friends are made, where books and films are chosen, where political activism is organized, where the most private data is created and stored.”

When the Church Committee, a 1970s reform body tasked with cleaning up intelligence abuses of another age (and which is quoted in the book's dedication), addressed surveillance and sabotage, there was still one realm that felt unassailably private: human thought. With the development of the Internet, however, viewing people’s searches, emails, Tweets and diversions becomes tantamount to mindreading. Or, as Greenwald writes, “To permit surveillance to take root on the Internet would mean subjecting virtually all forms of human interaction, planning and even thought itself to comprehensive state examination.”

The man behind the leaks

The understanding of oneself as potentially being watched is a critical part of effective surveillance–the point isn't that the government is watching everything—it's that at any point, it could be, that any action could be scrutinized at any time. “Know it All, Collect it All, Process it All, Exploit it All,” reads one NSA slide published for the first time in No Place To Hide. Under recently departed Director Keith Alexander, the NSA's goal was the collection of everything, everywhere—the total eradication of privacy in any form or conception. It was the sheer excess of the NSA’s aims that turned Edward Snowden from NSA hacker to arguably the most significant whistleblower in U.S. history.

For the first time, Greenwald quotes Snowden describing his time stationed in Japan as an NSA contractor at Dell Corporation, “The stuff I saw really began to disturb me. I could watch drones in real time as they surveilled the people they might kill. You could watch entire villages and see what everyone was doing. I watched [the] NSA tracking people's Internet activities as they typed. … I realized the true breadth of this system. And almost nobody knew it was happening.”

No Place To Hide vividly recounts the unfolding relationship between Snowden, Greenwald and filmmaker Laura Poitras, from their initial contact (Snowden connected with Poitras when Greenwald couldn't figure out encrypted messaging), to their meetings in Hong Kong and the tense days preparing the initial stories for publication. Snowden’s influence on the author is as palpable as his actions have been on the world since the stories first broke, and Greenwald’s admiration for the whistleblower's courage serves as an endearing counterpoint to the book’s fiery anti-authoritarianism.

The documents chosen for inclusion highlight major features of the NSA's global operations. First, from information about the NSA's BOUNDLESS INFORMANT record-keeping system, which was at the top of the meticulously organized archive that Snowden gave Poitras and Greenwald, and from slides describing the NSA's mission to “collect it all,” the documents are intended to destroy the credibility of national security officials who assured Congress and reporters that the NSA kept no such records, had no such mission, and undertook no such collection.

Second, No Place To Hide's central section emphasizes the NSA's relationships with corporate partners, an essential part of the agency’s global dragnet. The book includes a document, previously reported in part by Der Spiegel but never published in full, listing Qwest, AT&T, EDS, H-P, Motorola, Cisco, Qualcomm, Oracle, IBM, Verizon, Microsoft and Intel as part of a group of “over 80 Major Global Corporations” with whom the NSA has partnered. Via the agency's Special Source Operations (SSO) unit, the NSA leverages these partnerships to “gain access to high-capacity international fiber-optic cables, switches and/or routers throughout the world.”

That access lets the U.S. government download mindboggling amounts of data. One corporate partnership, codenamed FAIRVIEW, yielded 200 million digital and phone records per day in December 2012. The scope of total collection under SSO and other units is far more vast—in mid-2012, more than 20 billion “communications events” worldwide per day. At times, the only obstacle to global collection is an inability to store all the information that the NSA's tentacles bring in.

Finally, Greenwald stresses how the Five Eyes intelligence partnership, a military alliance in place since World War II, enables great cooperation (and hands-off treatment) between intelligence agencies in the UK, US, Canada, Australia, and New Zealand. Materials appropriated by Snowden include documents from the British Government Communications Headquarters that describe psychological hacks designed to sew distrust and paranoia among targets, while others advocate “'disruption' techniques in lieu of … 'traditional law enforcement'”—in other words, simply attacking suspects digitally rather than dealing with the pesky formalities of “evidence-gathering, courts, and prosecutions.”

Amidst the year's surreal procession of revelations about government spying, it can be easy to lose sight of the significance of these leaks. But the NSA is an entity so obsessed with secrecy that in Washington, its initials at one time were said to stand for “No Such Agency,” and so formidable that prior to 2013, prominent elected critics spoke publicly of its excess only in cryptic warnings. The amount of transparency and criticism in the wake of the Snowden Files was previously unthinkable; it poses an existential threat to the status quo.

So when government officials label Snowden or Greenwald a terrorist or criminal, it's not idle bullshit—it's representatives of one of the planet’s most powerful forces identifying an enemy. After Greenwald's partner, David Miranda, was released after almost nine hours of detention in Heathrow Airport under a terrorism statute, he said, “There's really nothing scarier than being told by these two governments that you're a terrorist. … You realize they can do anything to you. … They kidnap people, imprison them without charges or a lawyer, disappear them, put them in Guantanamo, they kill them.” Greenwald surmises offhandedly at one point that the security state is more powerful than the president, and there is no real reason to believe he's wrong.

No Place to Hide is a deeply satisfying punctuation mark on what has surely been a singularly uncomfortable year for the defense establishment. It is a damning picture of a government that operates outside of accountability, and of the war waged in the press against the people associated with the Snowden Files, against journalism, and against dissent. But ultimately, No Place to Hide will be shocking in proportion to the depth of your illusions as to the goodness of the mainstream media and the powerful interests it defends. It leaves little room for argument: What's normal in Washington is very dangerous indeed.

Daniel Massoglia (@jujueyeball) is a writer and lawyer in Chicago.