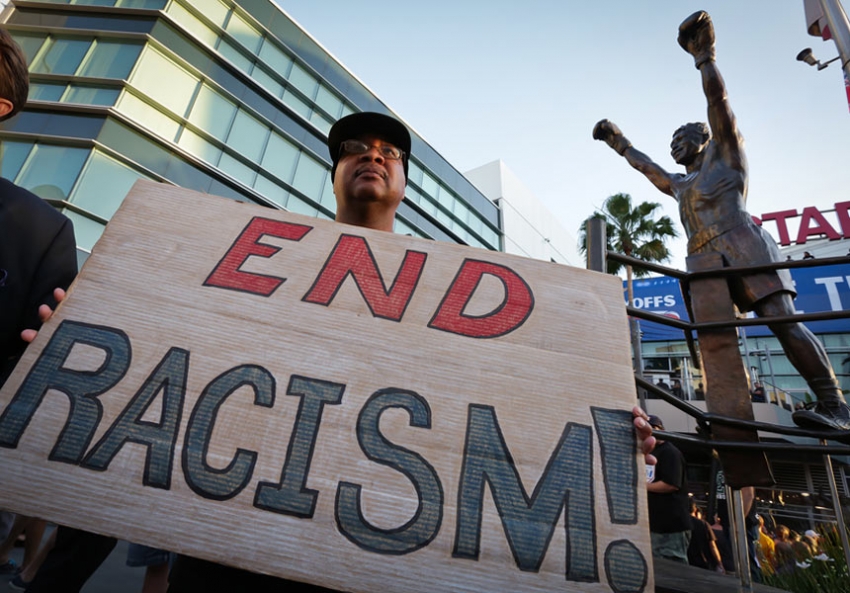 The Race Debate and Switch

America almost had a real conversation about racism.

It’s clear that the presence of the first black president has done little to salve our racial wounds. Instead, Barack Obama’s presidency may have made things worse.

The Southern Poverty Law Center has identified an explosive growth—as much as 800 percent—in the number of white supremacist and “patriot” groups since 2008. Aside from such reactionary responses, the reality of a black man in the White House has injected race into some virgin veins of American life. Brown University political scientist Michael Tesler describes what he calls “the growing racialization of American politics.” Democrats and Republicans once responded roughly similarly to hot-button racial issues (the O.J. Simpson case, Don Imus’ “nappy-headed-hos” slur), but since Obama’s election, a chasm has appeared. For instance, Democrats were three times as likely as Republicans to think that 12 Years A Slave deserved an Oscar and three times as likely to be dissatisfied with the George Zimmerman verdict.

In an April 7 cover story, “The Color of His Presidency,” New York magazine writer Jonathan Chait writes that “race … has now become the primal grievance in our politics, the source of a narrative of persecution each side uses to make sense of the world.” Chait believes this development cripples political discourse. But he’s too equivocal about where the blame lies. He identifies the persistence of anti-black attitudes among the Republican electorate as one cause, but he also blames those who point this out for spurring Republicans to dismiss racism as a mere smear tactic.

Chait’s article is the continuation of a less neutral series of dueling blog posts, in which Chait and The Atlantic’s Ta-Nehisi Coates have debated the role of black culture in the chronic disparities faced by African Americans.

The debate was triggered by Coates’ comment on his Atlantic blog that Wisconsin Rep. Paul Ryan’s remarks that men in “inner cities” are afflicted by “not even thinking about working or learning the value and the culture of work” is pretty much identical to the president’s practice when speaking to Black audiences of “feebly urging positive habits and behavior.”

The kernel of Coates’ argument: Black cultural pathology is used to deflect the damage of white supremacy and, ironically, the first black president is complicit in this framing.

Chait responded that the president is correct to focus on these cultural shortcomings and that African Americans’ history of oppression and degradation produced a “cultural residue that itself became an impediment to success.”

Coates countered that white supremacist institutions were the true culprits and that the cultural residues cited by Chait are “abstract thought experiments” not informed by research.

Both men offer worthwhile perspectives. Chait’s argument—that black culture was damaged by the “residue” of enslavement and its legacy—seems undeniable. Kidnapped Africans were stripped of their ancestral heritage when they were enslaved. The culture produced by this uniquely rootless people was necessarily ad hoc and concerned with accommodating and deflecting the oppression of slavery.

Without sanctuary, enslaved black people were especially vulnerable to the depredations of white supremacy and for several generations (long after slavery’s abolition) were socialized exclusively for subservience and dependency. This is the social dynamic that Chait calls “residue.”

Coates doesn’t so much disagree as insist that Chait and other “Obama-era progressives view white supremacy as something awful that happened in the past.” By contrast, he says, “I view it as one of the central organizing forces in American life.”

Their widely read dialogue was a rare example of how critical discussion in the public square can attract popular interest. But just as Chait’s New York piece was being digested, welfare rancher Cliven Bundy hijacked the discussion with his public speculation that “nigras” may have been better off as property, picking cotton. Soon thereafter, a recording of anti-black sentiment made by L.A. Clippers owner Donald Sterling was dumped into the discourse.

Without looking back, America galloped down distraction road.