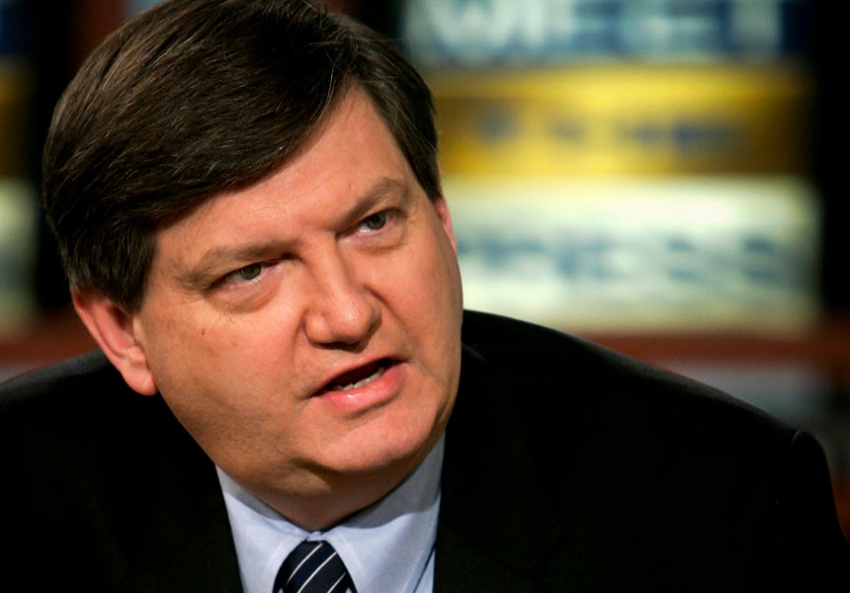 Obama’s DOJ is forcing Risen to choose between risking jail and testifying against his alleged source, Jeffrey Sterling, whom the government is prosecuting under the draconian 1917 Espionage Act, which makes it a potential capital offense to give national defense information to the enemy.

Why is President Obama’s Justice Department threatening a Pulitzer Prize-wining New York Times reporter with jail over a story that embarrassed the CIA during the George W. Bush administration?

James Risen is one of the few mainstream journalists willing to take on the CIA. In 2004 and 2005, he exposed scandals involving waterboarding and spying on Americans. The current controversy concerns Chapter 9 of his 2006 book, State of War: The Secret History of the CIA and the Bush Administration, which describes a failed CIA plot to give the Iranians faulty blueprints for a nuclear weapon through a Russian scientist. According to Risen’s confidential source, the scientist warned the Iranians that the blueprints contained flaws, and the plot blew up in the CIA’s face.

Obama’s DOJ is forcing Risen to choose between risking jail and testifying against his alleged source, Jeffrey Sterling, whom the government is prosecuting under the draconian 1917 Espionage Act, which makes it a potential capital offense to give national defense information to the enemy. Of course, the Iranians had already been told not to trust the blueprints. What Risen did was give information to the American people about the activities of its government—the precise reason our country’s founders established the First Amendment’s guarantee of a free press.

Of the 11 people in American history who have been charged with espionage for leaking classified information, eight of them have been charged under Obama, who ran for president in 2008 vowing to restore our civil liberties after the abuses of the Bush Administration.

Risen’s story didn’t jeopardize national security; it just embarrassed the CIA. Nevertheless, DOJ lawyers told the Federal Appellate Court in Virginia that forcing Risen to testify against his source would serve the government’s compelling interest in national security. The mere invocation of national security is generally all it takes for government lawyers to win in court, as they did here.

The Supreme Court rejected Risen’s appeal last week, leaving in place the decision from the United States Court of Appeals for the Fourth Circuit ordering Risen to reveal his source. That means the government can charge him with contempt of court, which carries jail time. Risen has vowed that if he ends up having to choose between betraying his source and facing incarceration, he’ll choose the latter, believing that if the government can compel his testimony, sources will dry up and we will know even less about what our government is up to.

When asked by a reporter about the Risen case, Attorney General Eric H. Holder Jr. said: “As long as I’m attorney general, no reporter who is doing his job is going to go to jail.” Holder’s rhetoric is comforting but far from conclusive. First, it conflicts with the actions of the DOJ, which subpoenaed Risen, then demanded that he reveal his source, then insisted that the trial court enforce the subpoena, then argued that Risen had no reporter’s privilege to refuse to testify and urged the Supreme Court to reject Risen’s appeal. Second, Holder’s statement to the press contains wiggle room because Holder can later declare that Risen wasn’t doing the job of a reporter when he published an unauthorized leak from a CIA informant.

That being said, I sincerely hope that Holder and the DOJ will not seek to charge Risen with contempt of court. Jailing a reporter for refusing to testify against a confidential source threatens press freedom and the First Amendment.

Meanwhile, in a rare case of congressional pushback against the CIA, Senate Intelligence Committee Chair Dianne Feinstein (D-Calif.) is attempting to declassify portions of a committee report that concluded the CIA had repeatedly misled Congress and the White House when it claimed that its brutal post-9/11 enhanced interrogation program (aka torture) produced actionable intelligence.

Obama says he favors releasing as much of the report as possible, but his lawyers demand a delay on the grounds that the CIA needs to first “undertake a number of security steps to protect the safety of personnel and facilities abroad.”

While Obama would seem to have little reason to cover up CIA activities during the Bush regime, he does have an incentive to prevent leaks from his own CIA. He has personally taken ownership of the CIA drone strikes in Yemen that assassinated Anwar al-Awlaki, an American citizen, and, in a separate strike, al-Awlaki’s 16-year-old son, Abdulrahman. Without providing any evidence, the Obama administration has justified the killing of the father on the grounds that he played an operational role in al Qaeda and that capturing him was not feasible. But it has never given an official reason for killing Abdulrahman.

Then there’s Benghazi. According to an August 2013 CNN report, at the time of the September 2012 attack that left Ambassador Christopher Stevens and three other Americans dead, dozens of CIA operatives were working out of the annex of the U.S. consulate on a secret project.

Yet congressional investigations into the tragic events in Benghazi have so far focused on the more trivial issue of White House talking points. And as long as the nation’s investigate reporters can be intimidated, jailed or marginalized, no one will be left to ask the troubling questions about CIA activities in places like Benghazi, or in Yemen, where the al-Awlaki family has been waiting nearly three years for an explanation as to why the CIA assassinated their 16-year-old boy, who, like his father, was a U.S. citizen.