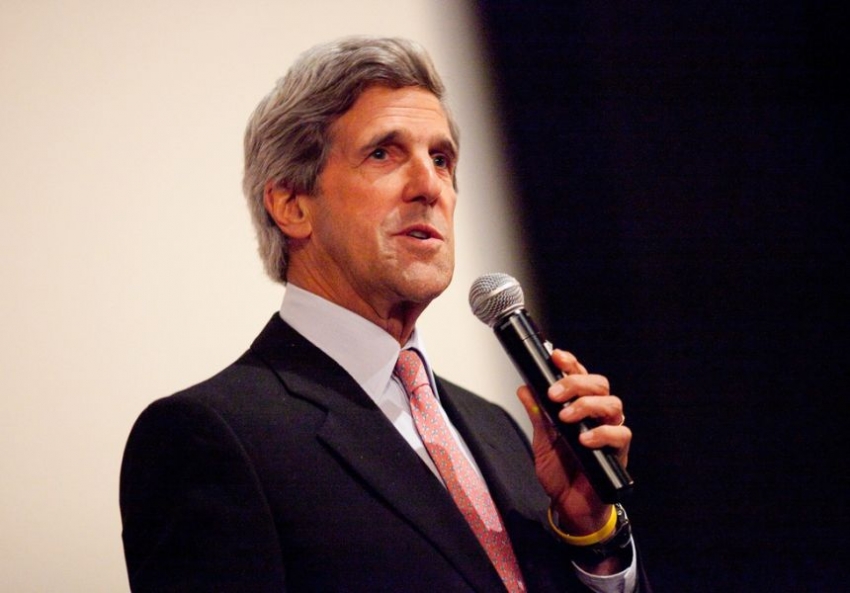 Under Secretary of State John Kerry, the State Department's Bureau of Democracy, Human Rights, and Labor has pursued policies directly counter to those of the NSA. (Center For American Progress Action Fund / Flickr / Creative Commons)

Internet Privacy Concerns May Be Dividing the U.S. Government

The NSA whittles away at our Internet freedom; the State Department tries to bolster it. Who will win out?

It is quite possible this is not only about optics, but is also a glimpse of a genuine and long-simmering conflict inside the government—a conflict between the security apparatus and the diplomatic corps.

Over the past year, the United States government has been in the news a lot for its efforts to undermine the Internet’s basic privacy and security protocols.

There were the Edward Snowden revelations about the National Security Agency sweeping up metadata, paying contractors to embed backdoors into their security technologies, hacking various private accounts of network administrators and developing malware to infect computers.

There was the Washington Post story about the NSA’s “collect it all” ideology.

There was the CNET story detailing the government’s efforts “to obtain the master encryption keys that Internet companies use to shield millions of users’ private Web communications from eavesdropping.”

And there was the ProPublica story detailing how “The National Security Agency is winning its long-running secret war on encryption, using supercomputers, technical trickery, court orders and behind-the-scenes persuasion to undermine the major tools protecting the privacy of everyday communications.”

So with all that in mind, it seems more than a bit hilarious that the U.S. government has just posted its latest annual announcement about “funding for programs that support Internet freedom.” In that dispatch, the U.S. State Department says it is looking to support “technologies that enhance the privacy and security of digital communications” and that are “less susceptible to intrusion or infection.”

Yes, you read that right: The same U.S. government that has been one of the most powerful forces undermining Internet security is now touting itself as a proponent of Internet privacy and security.

Of course, when you are done laughing about this, remember that there may also be other, less funny subtexts to this story.

You could, for instance, believe this is just the State Department attempting to conduct diplomatic damage control in the wake of the NSA-related revelations. That’s not a crazy theory—after all, in the last year, those revelations have strained U.S. relations with countries like Brazil, China and Germany.

Then again, it is quite possible this is not only about optics, but is also a glimpse of a genuine and long-simmering conflict inside the government—a conflict between the security apparatus and the diplomatic corps.

Recall that in late 2013 the Washington Post reported that the NSA has been frustrated by its inability to fully infiltrate the Tor network, which makes surveillance particularly difficult. Yet, according to the Tor Project’s website, the U.S. State Department remains an “active sponsor” of the network.

That detail is a reminder that while the State Department's funding announcement can seem absurd after the Snowden revelations, the department has actually been sponsoring and promoting Internet freedom initiatives for many years.

Summarizing the situation, Foreign Policy magazine recently wrote: “We see the NSA, an agency of the Defense Department, taking actions that are directly at odds with those of the State Department. … The NSA sees Tor as a tool for terrorists and spies. The State Department sees it as a platform for activists trying to evade the very kinds of surveillance systems that the NSA has built.”

In other words, the U.S. government may essentially be at war with itself. In this part of that war, a bureau in the U.S. State Department seems to be trying to help people thwart the NSA.

Now sure, resource-wise, the State Department’s Internet freedom initiatives may seem tiny in contrast to the NSA’s multibillion-dollar operations. And yes, the initiative may, in part, be a diplomatic ploy. But it is clearly something the NSA isn’t thrilled about. The State Department has helped protect a secure conduit for online communications. That is the opposite of what the national security apparatus wants, even if it is exactly what a democracy is supposed to do.