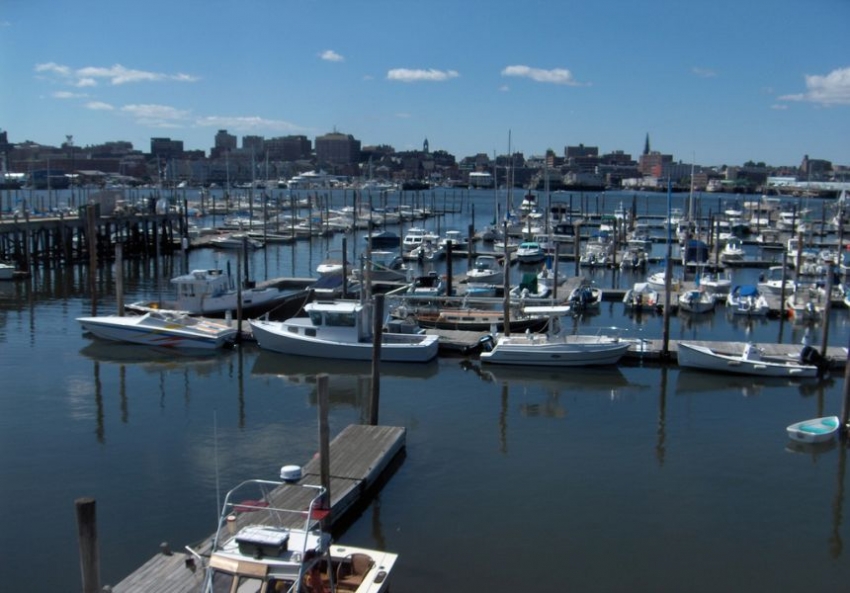 A small city in Maine strikes a blow against Canadian tar sands extraction.

'The fact that the API [and others] would spend $750,000 protecting their right to ship tar sands says an awful lot.'

Opponents of tar sands—the massive bituminous oil deposits in Alberta, Canada with a greenhouse gas impact four times greater than that of standard crude—have inched one step closer to a major victory.

On Wednesday night, the City Council of South Portland, Maine voted 6-1 to pass an early version of an ordinance that would ban the loading of crude oil onto ships and related infrastructure within city limits. It’s a local land use issue with staggering global implications: The oil industry, activists worry, wants to reverse the flow of the Portland-Montreal Pipe Line, a series of pipelines first built in World War II that now ships imported crude from the coast of Maine to Montreal. Amid ongoing tar sands extraction in Canada—and a dearth of export routes there—it would make more economic sense for the pipelines to flow the other way.

“From the standpoint of all the folks that have an interest in stopping tar sands from expanding, this is an important line of defense,” says David Stember, an organizer with 350.org, which helped gather support for the ordinance in the area. “It is a very big deal.”

But South Portland’s “Clear Skies Ordinance” isn’t finalized just yet. It’s now en route to the city’s planning board, which can make recommendations for any changes before sending it back to the City Council. The Council is then expected to take a final vote on the measure on July 21.

It’s been a long time coming. Last summer, activists with the group Protect South Portland launched a petition drive, which culminated in a local ballot question that would have blocked future oil infrastructure development in the town’s port, including the means to export crude overseas. But the proposed measure lost by an agonizingly close 51-49 percent margin—or 192 votes. The “no” side, which included the likes of the lobbying giant American Petroleum Institute (API), pumped out nearly $750,000 to fight the ordinance, outspending the initiative’s proponents by a 10-1 margin.

That sent activists back to the drawing board. In an attempt to sidestep critiques of regulatory overreach, advocates pushed for a more narrowly framed measure specifically targeting the loading of oil onto ships rather than blocking industry-wide development projects. Last December, the City Council passed a moratorium to that effect. The passage of that moratorium, in turn, spurred the creation of a Draft Ordinance Committee, which forwarded its proposal to City Council in June.

The relative speed of this move has heartened activists in the area. “We have seen officials in the city of South Portland move so far, so fast,” says Emily Figdor, director of Environment Maine, a state-level group that backs the ordinance. “It’s a testament to the power of people coming together to protect their community.”

And such an alliance is proving to be necessary. South Portland City Council was supposed to vote on the measure on Monday. But the unexpected turnout of a red shirt-clad anti-ordinance contingent—alongside hundreds of blue-shirt-wearing backers—forced the council to reschedule in the hopes of finding a larger space to accommodate the crowd. Activists from Protect South Portland and Environment Maine blamed industry interests for trying to delay the vote.

In the past, however, Portland Pipe Line has brushed aside charges that it plans to reverse the flow of the pipeline. But the locals don’t buy it.

“There’s no value to the company to say we have a plan to do this, so of course they won’t say that. But if you look at what they’ve done in terms of defending this project, it’s clear that this is an important opportunity for them,” says Stember. “The fact that the API [and others] would spend $750,000 protecting their right to ship tar sands says an awful lot.”

Wednesday’s ordinance is a municipal victory, and one that needs final approval, at that. Activists say, though, that the battle has implications that go well beyond Maine’s borders: While they may be outspent by Big Oil, carefully crafted local campaigns can halt dangerous federal-level fossil fuel projects.

This isn’t even the first time this year that local-level opposition has dealt a blow to the tar sands industry, as 350.org’s Stember points out. Opponents to Keystone XL in Nebraska, another potential export route, have managed to temporarily halt TransCanada’s plans for the project. When the State Department announced it was postponing its final decision on KXL in April, it referred to the climate of legal uncertainty in the state—a situation made possible by lawsuits championed by community groups like Bold Nebraska.

“Sometimes it feels like the democratic process is broken, that there’s so much money in politics, and the oil industry has just such enormous influence,” says Emily Figdor of Environment Maine. ”But what we’ve seen in South Portland over the last year and a half is that the power of people coming together to strategically make a difference in their community can, in fact, overcome the power of the oil industry.”

Correction: This article originally stated that the City Council's moratorium expired in May. In fact, it was extended for another six months (though is now superseded by the ordinance).