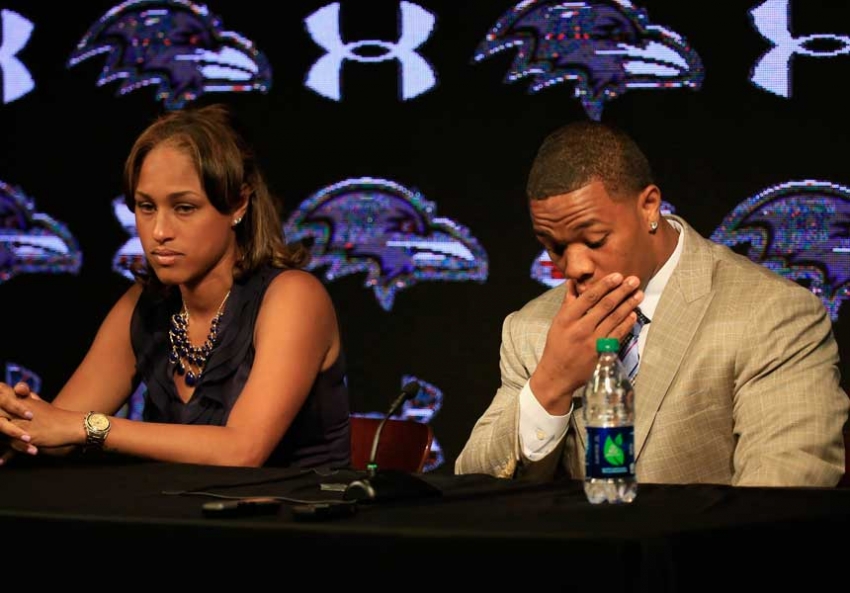 Janay and Ray Rice address a news conference at the Ravens training center on May 23 in Owings Mills, Maryland.

Janay Rice and the Problem with Trauma Voyeurism

Women’s bodies, and the pain inflicted on them, are still regarded as public property.

Our appetite for 'scandal' is never-ending. But turning women’s suffering into titillation is never the same as social progress. If we truly believed that victimizing women was wrong, we wouldn’t need photographic evidence of it to be outraged.

It’s a bad day for the digital age. The past few weeks have seen not one, but two controversies centered around “leaked” images of women, and the public’s presumed right to play voyeur. First, an anonymous assailant stole and posted a barrage of nude images of female celebrities—everyone from it-girl Jennifer Lawrence to gymnast McKayla Maroney, along with pretty much any other female human who could be considered even remotely “famous” in 2014—on Reddit. Then, just this week, video of Baltimore Ravens running back Ray Rice punching his then-fiance Janay unconscious was posted on the website TMZ. The fact that Ray Rice had beaten his wife was already public knowledge, and was widely reported on this past February. But where the reports had only poured gasoline on the ground, the video lit a match. It’s inspired widespread social media outrage, countless think-pieces (including, uh, this one), at least two hashtag protests, and Ray Rice’s firing.

On the surface, these two incidents are very different. One is a matter of theft and sexual assault, the other a matter of domestic violence. The theft of the “celebrity nudes” comprises a crime in and of itself; the Ray Rice video documents a crime in progress. Yet they do have one crucial thing in common: These images are being released against the will of the women depicted in them. Their publication has caused these women suffering. And many people have gladly commodified that suffering, in the name of the public’s “right to know.”

Janay Rice responded to the video with a widely publicized statement on Instagram, in which she condemned those who posted and commented on it.

“No one knows the pain that the media & unwanted opinions from the public has caused my family. To make us relive a moment in our lives that we regret every day is a horrible thing,” she wrote. “If your intentions were to hurt us, embarrass us, make us feel alone, take all happiness away, you’ve succeeded on so many levels,” she added.

Janay Rice’s choice to frame herself as partially responsible for the incident is problematic. (“We regret?” Wasn’t one of you unconscious?) Similarly, her stated intention to stay with her abusive husband, to “show the world what true love is,” is frightening for anyone concerned about her safety. But it’s a bit rich to ask a woman who’s currently in an abusive relationship to parse it as if she were a feminist anti-violence advocate standing outside of the relationship and passing judgment. In fact, it’s something that even actual feminist anti-violence advocates in abusive relationships frequently can’t do. Abusers are, among other things, expert manipulators, adept at deploying guilt and blame to excuse themselves. Janay Rice’s belief that she was responsible for her own assault, or that tolerating her husband’s abuse is a way of demonstrating “true love” is not a personal failing, it’s a symptom of abuse.

And it’s entirely reasonable for Janay Rice to feel humiliated, scared or re-victimized by the video’s publication. Anyone, male or female, abused or not, would flinch at having their most vulnerable moment exposed publicly, and against their will. And Janay Rice’s status as a domestic violence survivor complicates things substantially: Her body, her pain and her choices have suddenly been placed at the center of the national conversation. Her Instagram statement was met with enlightened commentary such as “shut the hell up!!! Weak ass little girl!!! How dare you, excuse your HUSBAND'S behavior for a check??!’” Her husband, whom we know to be abusive, has now lost his job, and there’s every chance he’ll turn his anger and blame on her. Her trauma has become an excuse for conservative commentators to go on air and frame her as a villain who “repeatedly attacked” her husband.

This isn’t concern. It’s pure voyeurism; treating a woman’s body and trauma as public property. Janay Rice’s life is already dangerously out of her own control—even if her husband never hits her again, she will always know that he could hit her. Given that abusers frequently keep going, or escalate the abuse after a relationship ends, she will always have to live in fear—and we’ve responded by taking even more control away from her. For the people scolding Janay Rice and calling her “weak,” their own titillation, their own right to be scandalized by domestic violence, matters more than the life or safety of the woman who survived it.

But that sense of entitlement isn't confined to Internet creeps trading pictures. Indeed, even seemingly responsible commentators have argued that we're entitled to the images of Janay Rice's trauma—some even suggesting that the release of the tape is ultimately done for her own good. “Poor woman,” wrote Petula Dvorak in the Washington Post. “Domestic violence is, above all, embarrassing… But there will be a greater good out of her personal pain.”

And there it is again: The assumption that Janay Rice’s “personal pain” is less important than our own edification or reaction to it, that her “personal pain” is somehow beside the point, when in fact, her pain is the entire point.

It’s true that there have been some positive consequences of the video’s being leaked. Ray Rice has been fired, whereas the print reports of his assault only led to him being suspended for a few games. There’s been a nationwide conversation about domestic violence, which may lead to more victims seeking help and forming escape plans to get out of their relationships. (This is the “greater good” to which Dvorak refers.) Attempts to blame Janay Rice for the attack are much harder now that we can actually see what happened. But the fact that there’s some social benefit doesn’t render the commodification of Rice’s pain acceptable; after all, there was social benefit from the “Fappening,” too, in the form of high-profile social and cultural pushback against victim-blaming and slut-shaming. But that doesn’t mean that the Fappening was a good thing.

And then, there’s the fact that none of this would be necessary if our culture were less permissive of domestic violence.  We already knew that Ray Rice attacked his wife, long before this video surfaced. If the NFL had a zero-tolerance policy toward rape and abuse, he would have been fired in February, when it happened. If we were already talking about domestic violence, and educating our children about the cycle of abuse as a matter of course, we wouldn’t need high-profile abuse cases in order to spark that conversation. If we didn’t blame victims, we wouldn’t need to see taped “proof” of the assault in order to believe that it happened, or to believe that Janay Rice didn’t deserve to be abused.

In that kind of world, Janay Rice would also have substantially more motivation and capacity to leave her abuser; she’d have less encouragement to blame herself for his actions, and more hope that she would be supported as a survivor, rather than being called a “weak little girl” or turned into entertainment. She could go from abuse to freedom, rather than going from an abusive partner to an abusive world.

Our appetite for “scandal” is never-ending. But turning women’s suffering into titillation is never the same as social progress. If we truly believed that victimizing women was wrong, we wouldn’t need photographic evidence of it to be outraged, wouldn’t even need to concentrate that outrage on specific cases. We could focus less on individual women, and more on changing the world for women as a whole.