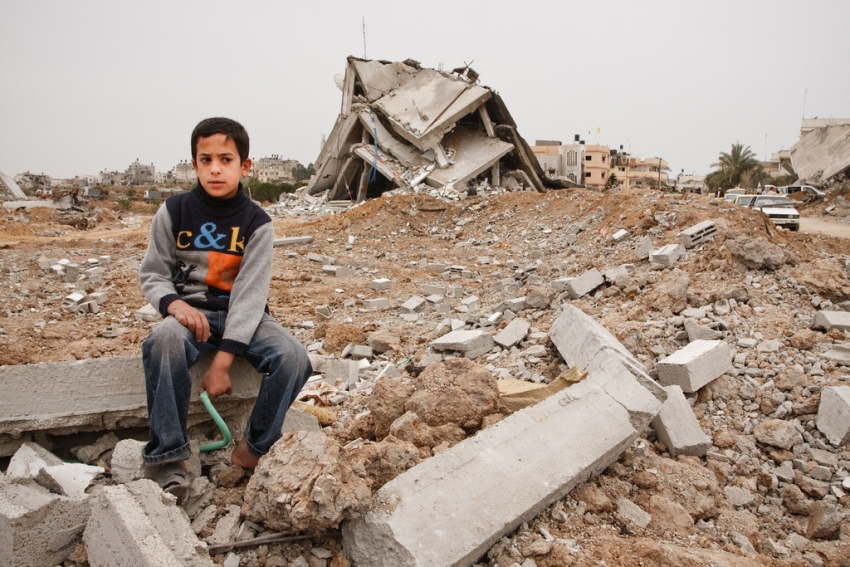 A Palestinian child in Gaza sits atop rubble after Israel's Operation Cast Lead in 2009. (andlun1 / Flickr)

Noam Chomsky: Only One Thing Will Make Israel Change Course

Israel’s brutalization of Palestinians through exercises like “mowing the lawn” will persist without a change in U.S. policy.

For a century, the Zionist colonization of Palestine has proceeded primarily on the pragmatic principle of the quiet establishment of facts on the ground, which the world was to ultimately come to accept. It has been a highly successful policy.

On August 26, Israel and the Palestinian Authority both accepted a cease-fire agreement after a 50-day Israeli assault on Gaza that left 2,100 Palestinians dead and vast landscapes of destruction behind.

The agreement calls for an end to military action by Israel and Hamas as well as an easing of the Israeli siege that has strangled Gaza for many years.

This is, however, just the most recent of a series of cease-fire agreements reached after each of Israel's periodic escalations of its unremitting assault on Gaza.

Since November 2005 the terms of these agreements have remained essentially the same. The regular pattern is for Israel to disregard whatever agreement is in place, while Hamas observes it—as Israel has conceded—until a sharp increase in Israeli violence elicits a Hamas response, followed by even fiercer brutality.

These escalations are called “mowing the lawn” in Israeli parlance. The most recent was more accurately described as “removing the topsoil” by a senior U.S. military officer, quoted in Al Jazeera America.

The first of this series was the Agreement on Movement and Access between Israel and the Palestinian Authority in November 2005.

It called for a crossing between Gaza and Egypt at Rafah for the export of goods and the transit of people; crossings between Israel and Gaza for goods and people; the reduction of obstacles to movement within the West Bank; bus and truck convoys between the West Bank and Gaza; the building of a seaport in Gaza; and the reopening of the airport in Gaza that Israeli bombing had demolished.

That agreement was reached shortly after Israel withdrew its settlers and military forces from Gaza. The motive for the disengagement was explained by Dov Weisglass, a confidant of then-Prime Minister Ariel Sharon, who was in charge of negotiating and implementing it.

“The significance of the disengagement plan is the freezing of the peace process,” Weisglass told Haaretz. “And when you freeze that process, you prevent the establishment of a Palestinian state, and you prevent a discussion on the refugees, the borders and Jerusalem. Effectively, this whole package called the Palestinian state, with all that it entails, has been removed indefinitely from our agenda. And all this with authority and permission. All with a [U.S.] presidential blessing and the ratification of both houses of Congress.”

“The disengagement is actually formaldehyde,” Weisglass added. “It supplies the amount of formaldehyde that is necessary so there will not be a political process with the Palestinians.”

This pattern has continued to the present: through Operation Cast Lead in 2008-2009 to Pillar of Defense in 2012 to this summer's Protective Edge, the most extreme exercise in mowing the lawn—so far.

For more than 20 years, Israel has been committed to separating Gaza from the West Bank in violation of the Oslo Accords it signed in 1993, which declare Gaza and the West Bank to be an inseparable territorial unity.

A look at a map explains the rationale. Separated from Gaza, any West Bank enclaves left to Palestinians have no access to the outside world. They are contained by two hostile powers, Israel and Jordan, both close U.S. allies—and contrary to illusions, the U.S. is very far from a neutral “honest broker.”

Furthermore, Israel has been systematically taking over the Jordan Valley, driving out Palestinians, establishing settlements, sinking wells and otherwise ensuring that the region—about one-third of the West Bank, with much of its arable land—will ultimately be integrated into Israel along with the other regions being taken over.

The remaining Palestinian cantons will be completely imprisoned. Unification with Gaza would interfere with these plans, which trace back to the early days of the occupation and have had steady support from the major Israeli political blocs.

Israel might feel that its takeover of Palestinian territory in the West Bank has proceeded so far that there is little to fear from some limited form of autonomy for the enclaves that remain to Palestinians.

There is also some truth to Prime Minister Benjamin Netanyahu's observation: “Many elements in the region understand today that, in the struggle in which they are threatened, Israel is not an enemy but a partner.” Presumably he was alluding to Saudi Arabia and the Gulf Emirates.

Israel's leading diplomatic correspondent Akiva Eldar adds, however, that “all those 'many elements in the region' also understand that there is no brave and comprehensive diplomatic move on the horizon without an agreement on the establishment of a Palestinian state based on the 1967 borders and a just, agreed-upon solution to the refugee problem.”

That is not on Israel's agenda, he points out, and is in fact in direct conflict with the 1999 electoral program of the governing Likud coalition, never rescinded, which “flatly rejects the establishment of a Palestinian Arab state west of the Jordan River.”

Some knowledgeable Israeli commentators, notably columnist Danny Rubinstein, believe that Israel is poised to reverse course and relax its stranglehold on Gaza.

The record of these past years suggests otherwise and the first signs are not auspicious. As Operation Protective Edge ended, Israel announced its largest appropriation of West Bank land in 30 years, almost 1,000 acres.

It is commonly claimed on all sides that, if the two-state settlement is dead as a result of Israel's takeover of Palestinian lands, then the outcome will be one state west of the Jordan.

Some Palestinians welcome this outcome, anticipating that they can then engage in a fight for equal rights modeled on the anti-apartheid struggle in South Africa. Many Israeli commentators warn that the resulting “demographic problem” of more Arab than Jewish births and diminishing Jewish immigration will undermine their hope for a “democratic Jewish state.”

But these widespread beliefs are dubious.

The realistic alternative to a two-state settlement is that Israel will continue to carry forward the plans it has been implementing for years: taking over whatever is of value to it in the West Bank, while avoiding Palestinian population concentrations and removing Palestinians from the areas that it is absorbing. That should avoid the dreaded “demographic problem.”

The areas being taken over include a vastly expanded Greater Jerusalem, the area within the illegal separation wall, corridors cutting through the regions to the east and probably the Jordan Valley.

Gaza will likely remain under its usual harsh siege, separated from the West Bank. And the Syrian Golan Heights—like Jerusalem, annexed in violation of Security Council orders—will quietly become part of Greater Israel. In the meantime, West Bank Palestinians will be contained in unviable cantons, with special accommodation for elites in standard neocolonial style.

For a century, the Zionist colonization of Palestine has proceeded primarily on the pragmatic principle of the quiet establishment of facts on the ground, which the world was to ultimately come to accept. It has been a highly successful policy. There is every reason to expect it to persist as long as the United States provides the necessary military, economic, diplomatic and ideological support.

For those concerned with the rights of the brutalized Palestinians, there can be no higher priority than working to change U.S. policies, not an idle dream by any means.