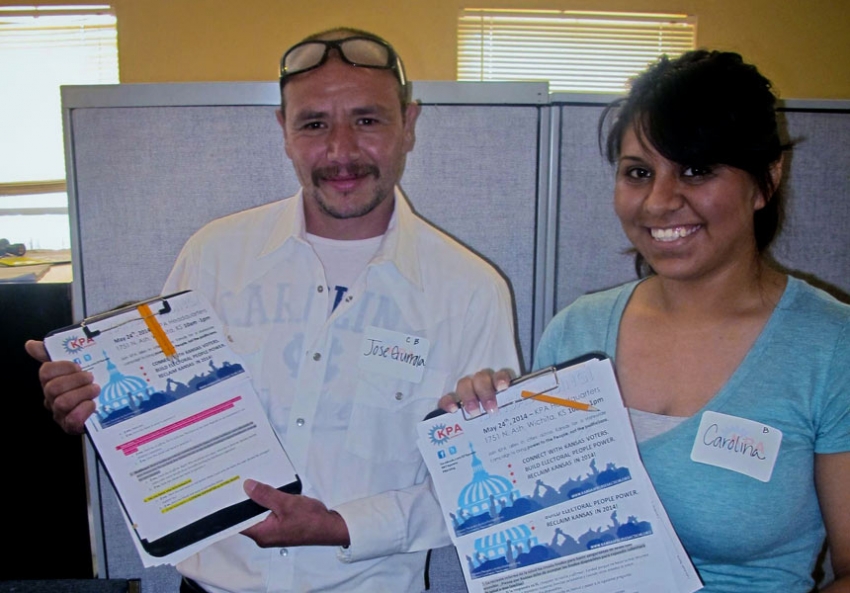 Why is Pat Roberts running for his life in the Kochs’ home state? Ask community organizers.

KPA’s ability to unite many different kinds of people around an issue like voting rights illustrates how vital the group’s work is.

Heading into the November elections, you could be forgiven for assuming the GOP hold on Kansas isn’t going to loosen. The home base of the Koch brothers, the state has become a poster child of Tea Party Republicanism, toeing the far-right line on voter ID laws, abortion restrictions and a host of other issues. In 2012, the National Journal rated the congressional delegation from Kansas as the most conservative in the country—and that was before a Koch-funded campaign succeeded in ousting moderate Republicans in that year’s primaries. Oh, and Secretary of State Kris Kobach happens to be a leading author of Arizona’s SB 1070, the infamous immigration law that critics say encourages racial profiling. Kobach helped write the bill while serving as legal counsel at the far-right Federation for American Immigration Reform.

But in the lead-up to November, Kansas’s red-state armor began to show some cracks. Since mid-August, Gov. Sam Brownback, a Tea Party darling up for re-election this fall, has been polling 2 to 6 points behind challenger Paul Davis, a Democrat. Same with Kobach, whose cozy 5-point lead over his leftwing challenger shrunk to within the margin of error last month. Even Republican Sen. Pat Roberts, whose tenure in Congress predates the Reagan era, appears poised to lose his seat—polls show him trailing his little-known challenger, Independent Greg Orman.

Kansas People’s Action (KPA)—an black- and Latino-led organization dedicated to fighting crony capitalism, racism and big money politics—isn’t shy about taking credit for the turnaround. “Their poll numbers are down in large part due to the work that we’ve been doing,” says KPA’s executive director, Sulma Arias. That work includes reaching out to a set of 112,000 less-frequent voters who are black and Latino. The message they tell voters? “Kobach is trying to game the system by messing with the ballot and pushing restrictions on voting that help him and his friends, like Brownback and Roberts,” says Arias.

Arias is referencing measures like the state's voter ID law, authored by Kobach. It requires that would-be voters in Kansas prove U.S. citizenship when registering and show a valid photo ID on Election Day—a dual test 7 percent of eligible U.S. voters cannot pass, according to a Brennan Center for Justice study. African Americans and Latinos are particularly disenfranchised by such laws: 25 percent of blacks and 16 percent of Latinos lack the requisite ID.

When the law was passed in 2011, Arias was running Sunflower Community Action, an affiliate of National People's Action, a national network of community organizing groups. In her two-year tenure as executive director, Arias had made it her mission to broaden the group’s focus from working with an exclusively black membership in Wichita, primarily on affordable housing, to reaching out to the state’s growing Latino population, initiating campaigns to secure driver’s licenses and in-state college tuition for undocumented immigrants.

Believing that Kobach was overstepping his bounds as secretary of state—a position that typically entails enforcing laws, not writing them—Arias decided someone needed to take on Kobach and his policies directly. So Sunflower launched a 501(c)4 advocacy arm, KPA, that set its sights on challenging the policies that have been championed by the state’s far-right Republican leadership, particularly Kobach and Brownback.

Teresa Garvey, a bookkeeper and Peruvian immigrant living in Wichita, learned about Kobach in 2012 when she saw KPA organizer Louis Goseland talking about him on TV. “He said Kobach was pursuing illegal immigrants instead of doing his job,” she recalls. “I wanted to find out what he meant by that. It made me want to get involved.” She’s now an active KPA volunteer. Working with the group has made her think for the first time “about the experience of black or poor white communities, how we could work together to make Kansas a better place,” she says.

Like Garvey, Reverend Carieta Cain Grizzell, of Wichita’s Grant Chapel African Methodist Episcopal Church, first took notice of KPA as the anti-Kobach campaign gathered steam in 2012. “That was when I first heard about Louis Goseland and the KPA,” she says. “So I went to a meeting and I really got excited about what they were doing. It really fell in line with what I’ve been about all my life.” Grizzell says she was particularly galvanized by KPA’s work against the Kobach-authored voter-ID law. “It’s like poll taxes,” says Grizzell. “Kobach has made voting rights a farce in the state of Kansas.”

For Grizzell, KPA’s ability to unite many different kinds of people around an issue like voting rights illustrates how vital the group’s work is. “I really like the fact that it brings together the African-American, Latino and poor white communities,” she says. “We work together as one united front.”

KPA has made it a mission to expose how policies Kobach and Brownback supported—from voter ID laws to the food stamp cuts in 2013 that kicked 20,000 Kansans off the rolls to an SB 1070-style immigration law—breed racial and economic injustice.

The immigration campaign gained national attention in the summer of 2013, when 300 KPA activists converged on Kobach’s residence in Kansas City to call for immigration reform and a pathway to citizenship. Many activists placed empty shoes on Kobach’s doorstep, symbolizing their deported family members, friends and neighbors. Kobach quickly issued a scathing response to the action, calling the activists “illegal aliens” and accusing them of “KKK type of intimidation.”

The comments ignited a national firestorm. Perhaps more importantly, they galvanized black and brown communities in Kansas to see their struggles as connected. “The black community thought of itself as separate until Kobach made that KKK comparison,” says Reuben Eckels, KPA’s deputy director and a pastor at New Day Christian Church in Wichita. Many weren’t very aware of Kobach’s policy record, he says. “We took his KKK comments to the African-American community and started talking about voter registration,” Eckels says. Arias says the converse was true for Latinos, who were aware of Kobach’s draconian immigration laws but less aware of issues like voter ID regulations.

The protests over police violence in Ferguson, Missouri, also helped knit together Kansas’s African-American and Latino communities. Just days after the protests began, Arias connected deportations and detentions in Kansas with police brutality in Ferguson in an online essay, “Why Ferguson Matters to Latinos.”

“We, as Brown, Hispanic, Latino and Immigrant community should be yelling just as loud, ‘Hands up don’t Shoot,’ ” she wrote. “This is the time to stand together in rage and love for our communities.”

Soon after, Sunflower began gathering blacks and Latinos for community forums and solidarity actions around Ferguson. A week and a half later, at a community forum organized by Sunflower, Wichita Mayor Carl Brewer pledged his support for introducing a mandatory dashboard and body camera program for the city’s police department—a demand Sunflower began voicing in 2005. Officials plan to have the program operational by the end of the year.

Black-brown unity is on full display as voting day approaches. This spring, KPA launched a political action fund to reach out to voters. Powered by Latino volunteers like Garvey and African-American volunteers like Grizzell, KPA Political Fund is one of the only voter campaigns in Kansas to make use of a predictive dialer, a device that saves time by dialing automatically. In addition to educating voters about Brownback and Kobach, KPA Political Fund has lined up monitors to observe both primary and general elections, making sure that eligible voters without ID are allowed to use provisional ballots, as required by law.

But Eckels stresses that while KPA has worked very hard to oust Kobach and Brownback this November, the group is an independent organization. “We’ve been let down by both parties,” he says. “We’re more interested in holding people accountable to the issues. Eventually, we may field our own candidates.”

For now, an upset of Brownback or Kobach would be a major coup. Even with sinking poll numbers, the two have a long list of wealthy allies, from the Heritage Foundation to the Koch family, and there’s no reason to think they’ll go down without a fight. But Garvey and Grizzell remain confident. “We’re now at a place where almost a quarter of Kansas is black and brown,” says Grizzell. “That’s power.”

Sam Ross-Brown, a student at the University of Minnesota, was a summer 2010 In These Times editorial intern.